The additional ventilation takes the form of two Riing 14 fans from Thermaltake, placed in the top of the case, in extraction and in front in suction.

We start first with the temperature of our CPU. We keep the front and the top of our test case. Let’s see if the airflow is sufficient for the good cooling of the Ryzen 7 1700X. 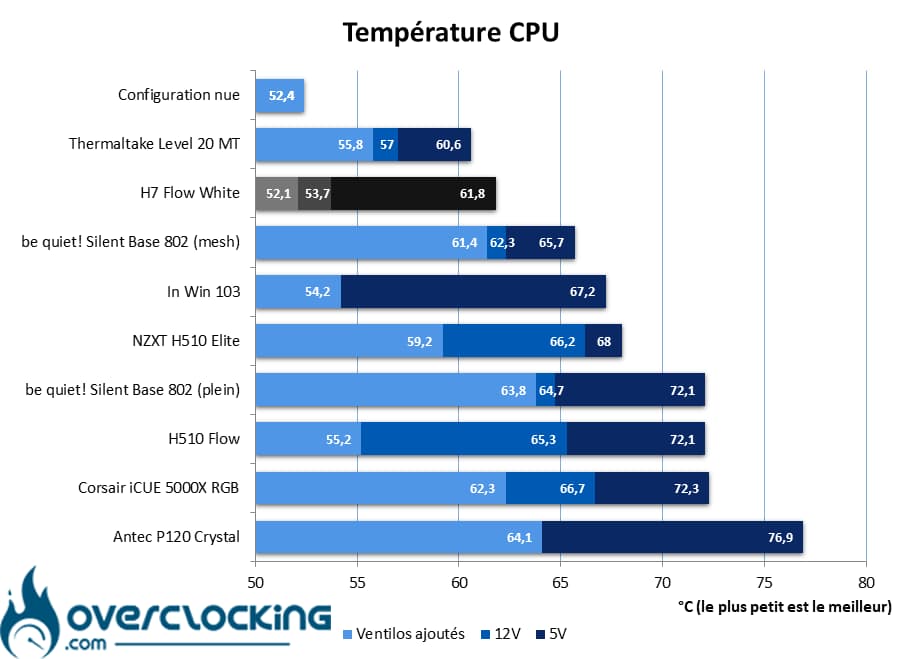 So we start our series of readings with the temperature of the processor. On this subject, we notice that our Ryzen 7 1700X is well cooled in this H7 Flow. With a low speed fan, the CPU is close to 62°C, nothing dramatic considering the competition. Pushing the speed of the two fans makes it possible to gain quite a bit and the temperature drops to 53.7°C. Nevertheless, adding ventilation will not revolutionize the situation, since it is less than 2°C.

In order to ascertain the limiting factor in the story (and how much), we remove the top as well as the front of the case. The goal here is to show the raw performance of the integrated fan. 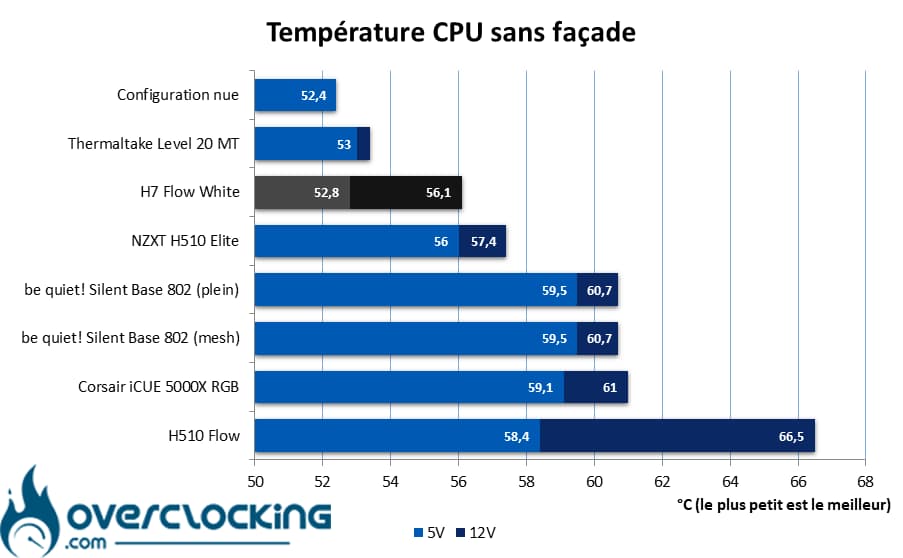 By removing the front panel and the upper part of the case, we can observe temperature gains. However, these gains are quite limited, less than 1°C at full speed against 5.7°C at low speed. Clearly, the front and top panels allow good air circulation within this H7 Flow, unlike a H510 Elite for example.

We repeat the operation, but with measurements made on the graphics card. Here, we test with original ventilation and completed ventilation. 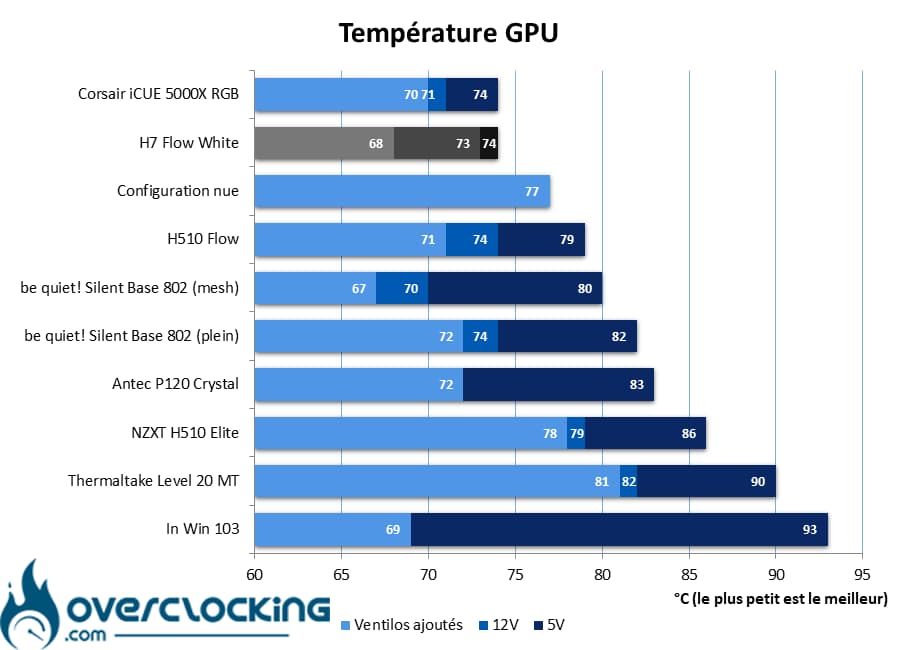 As far as the graphics card is concerned, there is no need to worry about it. Our reference HD 7970 takes good advantage of the airflow generated by the basic ventilation. It must be said that the front fan is directly watering it. However, supplementing the ventilation is not a bad idea if you still want to pull down temperatures.

We do the same test again, but remove the front panel and top of the case. Let’s see how this will affect the temperatures of the card. 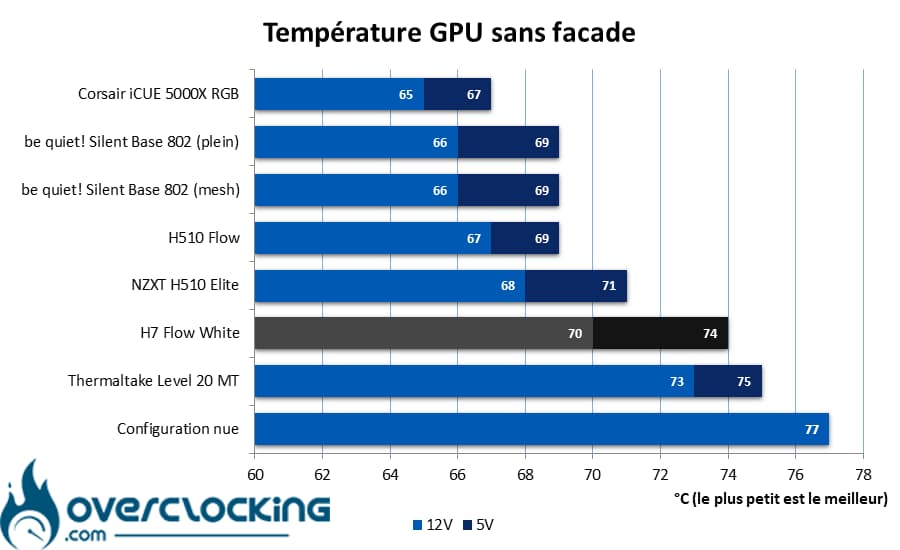 Again it is confirmed, this H7 Flow is a very breathable case. Without the front panel, with low speed ventilation, there is no gain, perhaps the fan lacks punch in its lowest speeds. At full speed, there is a gain of 3°C, which is not much either.

Here we simply measure the noise emitted by our config when running the CPU cooling and GPU cooling very fast. 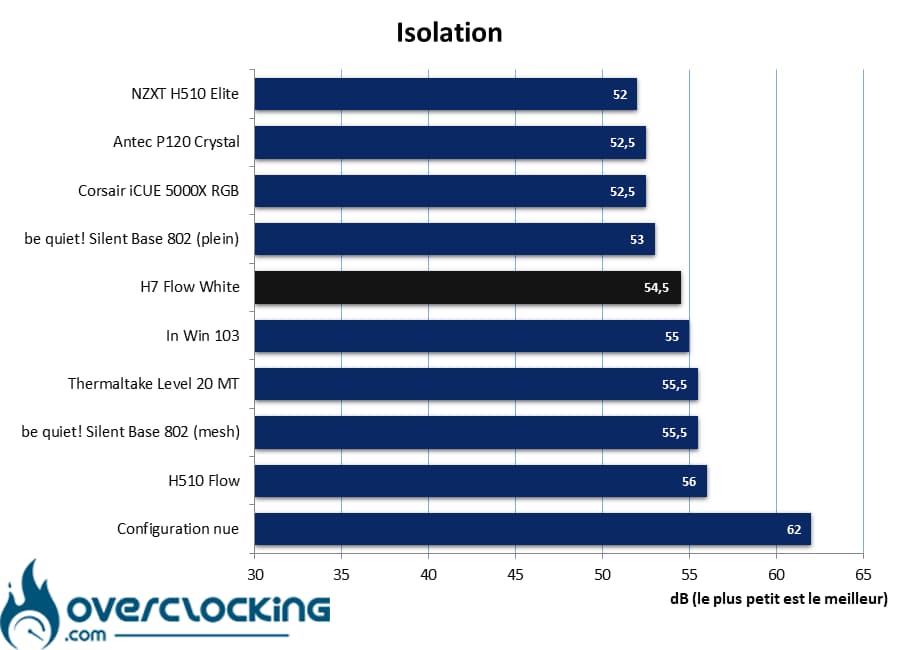 This H7 Flow is not really the best isolating case we have had in our hands. On the other hand, our sound meter doesn’t get too excited about the numerous openings on the top and front of the case. With 54.4 dB, it is in the average range of the models we tested.

Noise of the original ventilation:

This time we measure the noise emitted by the original ventilation of the case. To do this, the configuration runs in idle mode ( CPU and GPU fans at minimum) while the readings are taken successively at 5V, 8V and 12V on the case fan. 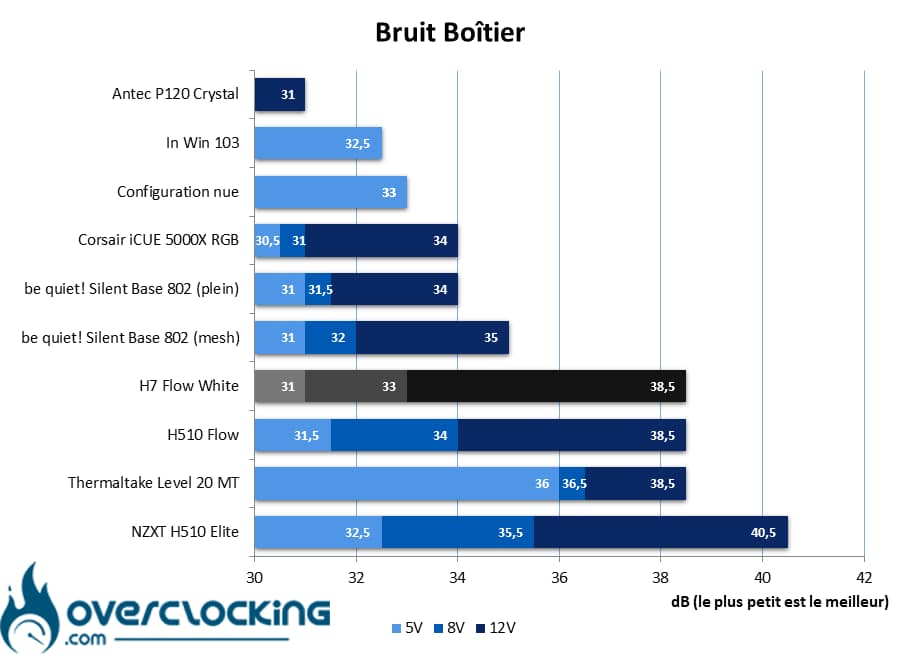 Nevertheless, the two fans inside this model can be audible when they are running at full speed. In these conditions, we note a nice 38.5 dB, positioning it among the noisiest cases of our comparison.

However, they will become inaudible if you reduce their speed even a little. And at low speeds, it’s impossible to know if it’s the configuration or the fans that you hear.

As we could see, the H7 Flow offers a good basic cooling, especially helped by a front panel that does not undermine the airflow… Especially since the ventilation seems to be sufficient to cool our configuration. However, adding a fan may be a good idea if you want to gain a few more degrees on the graphics card.

As far as insulation is concerned, we are quite surprised by the sound level of the front panel and the upper part. Clearly, we expected worse.

However, be careful with the basic ventilation regime, since at full power, the two mills can be quite audible. Fortunately, by regulating them, you can make them inaudible.