After our test of the LS720, the DeepCool brand did not stop and proposed a new series of watercooling kits. It is indeed the LT, a range of two kits offering a new visual aspect, more worked, especially at the pump level. Like a Kraken kit, the LT Series benefits from infinite depth lighting effects. And among the two AIOs that make up this range, we received the LT720, the bigger of the two! So let’s see, through this test, what it has in the belly!

As we said before, the LT series is rather limited since it offers only two models. Indeed, we find the LT720 in 360 mm, the one we will test. Secondly, there is the LT520, a more compact version, in 240 mm. Nevertheless, DeepCool indicates that these are high performance oriented products.

On its website, the company highlights the performance side via a fourth generation water pump. The performance is optimized via a thick copper base with micro-channels optimizing the flow of liquid that will be driven by a three-phase motor operating at up to 3100 rpm.

To ensure ventilation, this 360 mm version is equipped with three 120 mm fans, FK120, which we met during the test of the AK500. According to DeepCool, these are powerful and efficient mills.

With this, we can also count on a simple and intuitive assembly mechanism. In addition, the assembly is discreet thanks to the black mounting arms, so as not to attract too much attention. Also, the pressure on the processor is optimal, according to the company.

Finally, we can count on a devastating look thanks to a pump cover very worked. It then has several lighting zones with infinite depth effect that can be controlled via the motherboard. Can’t wait to see it in action! 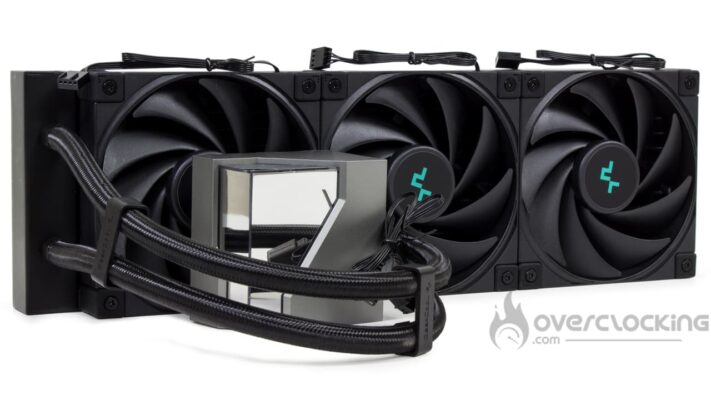 Currently, if we want to get this AIO, we will have to turn to Amazon which references it at 165 € and should be available soon on the American Amazon. In fact, it is a little bit cheaper than the LS720, its predecessor.