The RTX 40 family should start to grow in early 2023. We already know that the RTX 4070Ti is scheduled, but the lower ranges will be to watch and especially the future RTX 4060. Without really talking about a leak, the head of Gaming Desktop of Lenovo China expressed himself on the subject by suggesting that he was just making some assumptions. Lenovo being a major player and China the territory of leaks, we can consider that the man may have some information that others do not have. Finally, let’s keep in mind that Lenovo has just joined the club of Nvidia’s partners to produce its own graphics cards… For them the RTX 4060 would be 20% faster in games than the RTX 3060 and would be about the same level as an RTX 3070. On the other hand, its price positioning would confirm the shift of the range upwards since he estimates that we should find this card around the price of the 3060 Ti. Finally, regarding the launch schedule of this card, the prolix Chinese speaks of a release around mid-2023. Knowing that the RTX 4070Ti is scheduled for the beginning of the year, this timing seems indeed possible unless Nvidia decides to accelerate things so as not to leave Intel or AMD alone on this price segment. 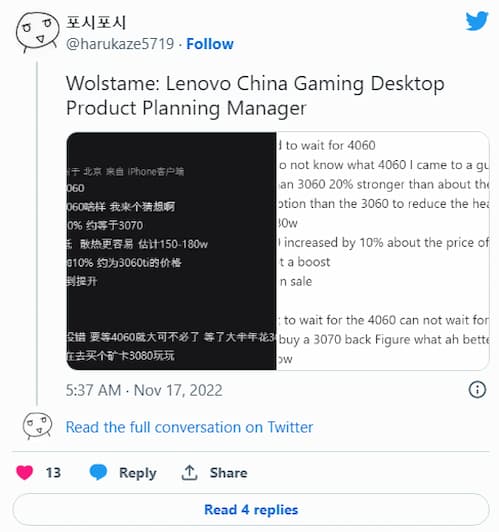 Obviously, we are under the leak and with really a lot of conditional. So we’ll take all the usual precautions on this rumor. On our side, a source tells us that Nvidia could make a grouped launch in early 2023 with the 4070Ti/4070 and 4060. We’ll keep an eye on this one, of course, but on these ranges, the inventory of the green partners in RTX 30 chips will be crucial to determine the timing of future launches.