Yes, they are coming and above all, they are in our hands: “Thank you Intel!” Well, know right away that this is an unboxing and not a test. So you won’t get any information about the performance of the Intel ARC 770 16 GB or the ARC 750 8 GB model. And to be perfectly honest with you, we haven’t even had a chance to plug them into our test setup yet. Received at 4:30pm, most of our evening was spent taking pictures and writing this unboxing.

However, we invite you to take a look at this video made by Intel and which will already give you some reference benchmarks, especially against an EVGA RTX 3060 XC Gaming. You can also check this page with all the official information given by Intel. We’ve known for a few days that the Intel Arc A750 and A770 GPUs will go on sale on October 12 starting at $289 and $329 respectively, with the limited edition Arc A770 available for $349.

Intel has every intention of getting back into the $200-$400 segment, targeting NVIDIA’s RTX 3060. By becoming the third player in the world of GPUs, Intel intends to put the price/performance ratio back in the spotlight as shown in these slides where Intel GPUs are facing the EVGA RTX 3060 XC Gaming in 1080p Ultra and 1440p High.

Now that we have these two cards in our hands, we will be able to give you our impressions very quickly with the official launch. Here is a table with the different characteristics of these two cards. 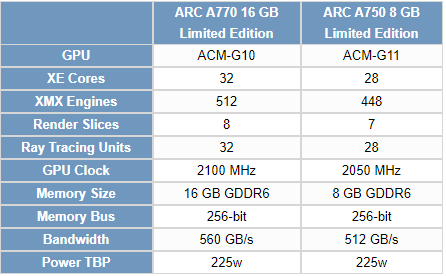 But let’s go straight to the presentation of the two graphics cards and the press kit we received for the occasion.

Press kit: a presentation with a twist

The first impression is: “yeah, two cardboard boxes containing the two graphics cards, nothing extraordinary”, but when you open them… everything changes. In reality, in these ordinary-looking boxes, a small mechanism is hidden that allows the grail to be revealed, well, the GPU in two steps.

Once the top and bottom edge of our case is opened, we discover the words ” Let’s Play “. The quality of the print is confusing as it looks like a real halo of light and this is just the beginning! As soon as the left and right sides are opened, the box of our Intel ARC A770 or ARC A750 appears.

The presentation of the two boxes is identical. In fact, when the last two sides are opened, a tab on the bottom of the graphics card box snaps open and the GPU box pops up and seems to say “It’s time to test me now! The boxes containing the GPU are also protected by foams placed at the four ends. Now let’s open and discover the Intel ARC A770 and ARC A750.

Both graphics cards we received are ” Limited Edition ” models. We will come back later on the difference between these versions and the others. The two boxes containing the GPU are perfectly identical except for the model number.

The bottom opening reveals the graphics card as well as a notice and a document thanking you for the purchase of an ARC graphics card. The most attentive will see that a mini sticker similar to those found with the processors is also available.

Once the graphics card is removed, a small box appears but only for the ARC A770 version. It is a small box containing a USB cable. It must certainly be used for RGB synchronization since only the ARC A770 model is equipped with it. This is the only visual difference between these two models.

So we will limit ourselves to a series of photos of either one to illustrate the information we are already able to provide. The card has two 85mm fans with 15 blades each. In terms of length, the card measures 267 mm and will occupy a width of two slots on your motherboard via a USB port.

To power this GPU, you will need an 8-pin and a 6-pin connector. Intel keeps traditional power connectors and that’s good. We can see on the right picture below the small USB connector that should allow the synchronization of the RGB with your other components when connected to your motherboard.

Design wise , it’s sober but very efficient. The card plays on black and anthracite colors. We have no doubt that modders will have a great time customizing these models. On the front panel, there are no inscriptions or logos, even on the central part of the fans. It is only on the top edge that it says “Intel ARC” and on the backplate where it says the model of the card.

The build quality is excellent and we really like the wrap around finish on the back of the card. This allows to make the connection between the front panel and the backplate. There are four outputs, three DisplayPort 2.0 and one HDMI 2.1. As for the prices that have already been revealed, we are talking about an ARC A770 16 GB starting at $ 329 and an ARC A750 at $ 289. With European taxes, we should be around 400/425 euros.

Oh, goodies in the press kit!

When we received the packages, there were three of them even though we knew we would only receive two graphics cards. But what can this third box contain? No, I won’t admit to opening this third box first, no no. So first goodies, it is a series of screwdrivers, fourteen to be precise and which will perhaps be very useful to discover the entrails of our ARC A770 and A750.

Finally, the second goodies is hidden in a box that uses the opening system of our two samples. However, in terms of size, the box is much more imposing. But what can be hidden inside?

This is a neon light with the name “ARC”. This one comes with two brackets that allow you to either put it on your desk or to fix it directly on the wall. Frankly, it’s a nice souvenir of this first GPU launch for Intel. It will take place in the lab in our area dedicated to Intel products.

Now that you know everything we were allowed to reveal, we invite you to visit us here to discover the performance of these two new ARC A770 Limited Edition and ARC A750 Limited Edition graphics cards. Thanks to Intel for sending us this press kit for the launch.