After announcing a while ago that it had finalized its 3nm manufacturing process, Samsung has just announced the official shipment of the first 3nm chips to its customers. This announcement is worth a small marketing victory since the Korean company becomes the first manufacturer of 3nm chips in the world, thus tackling TSMC on the issue of mastery of advanced processes. This is obviously a great satisfaction for the company whose foundry division seemed to be suffering for some time. Samsung has managed to launch its first 3nm chips without any delay but the first customer served is not a smartphone manufacturer but a company specialized in cryptocurrency mining. This last information has also caused some controversy since the first customer of these 3nm chips is a Chinese manufacturer of SoC for mining machines, probably chosen opportunely to serve as a guinea pig for this first series. 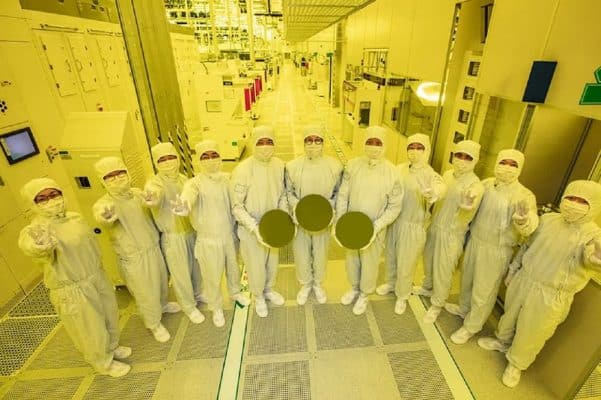 In the coming months, Samsung should launch a second generation of its 3nm. With this evolution, we can have an improvement where the performance up to 30%. The energy consumption will be reduced up to 50% and the surface used will be reduced by 35%. It is probably this version that will be used in processors for smartphones, but we will have to wait a little for that, probably 2024. On the 25th, Samsung Electronics held a shipping ceremony for 3nm foundry products using Gate All Around (GAA) next-generation transistor technology on the V1 (EUV) line at the Hwaseong campus, Gyeonggi-do. The event was attended by about 100 people, including Minister of Commerce, Industry and Energy Changyang Lee, suppliers, […] Samsung Electronics DS Division Head Kyeong-hyeon Kye (President), executives and employees, and executives and employees who participated in the GAA In fact, Samsung is a few weeks ahead of TSMC, which should also launch its first 3nm chips soon.