Recently, we talked about an RTX 4090 from Lenovo. This model is back in the news. Indeed, the card is now shown alongside a laptop of the brand. The goal? Simply to put things in perspective!

As you can see, the card appears again, but alongside a Legion Y9000X laptop this time. To get an idea of the size of the cinder block, the laptop is a 16″ model with a width of 35.8 cm. As you can see, the card is at least as wide as the PC. However, we can guess that it is much thicker, almost 7 cm according to VideoCardz. As for the weight, we prefer not to talk about it. From mop-up photos showed a heatsink with 13 copper heat pipes and a steam chamber… It also in copper! 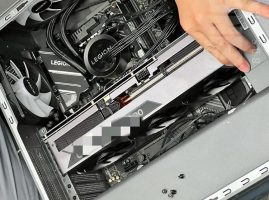 In short, a card that may cause some compatibility problems with some cases because of its large size. Moreover, on one of the pictures, we can guess that the card has difficulty to fit in the case of a preassembled PC of the brand. Finally, the reason for such a large size for these cards is simply the high power consumption and heating of the GPU. As a reminder, the expected TDP is 450W!