Our first set of tests will be dedicated to synthetic benchmarks. These are often used for overclocking competitions but are also very interesting to compare different GPUs. We will therefore focus on benchmarks from the 3DMark series. We will test the following benchmarks:

Let’s start with 3DMark Fire Strike, which is one of the most used benchmarks today. It consists of two graphics tests, a CPU test and a fourth test that combines GPU and CPU. Don’t forget to deactivate the demo which doesn’t add anything to the final score and prolongs the benchmark (unnecessarily). The version used for these tests is of course the latest one. 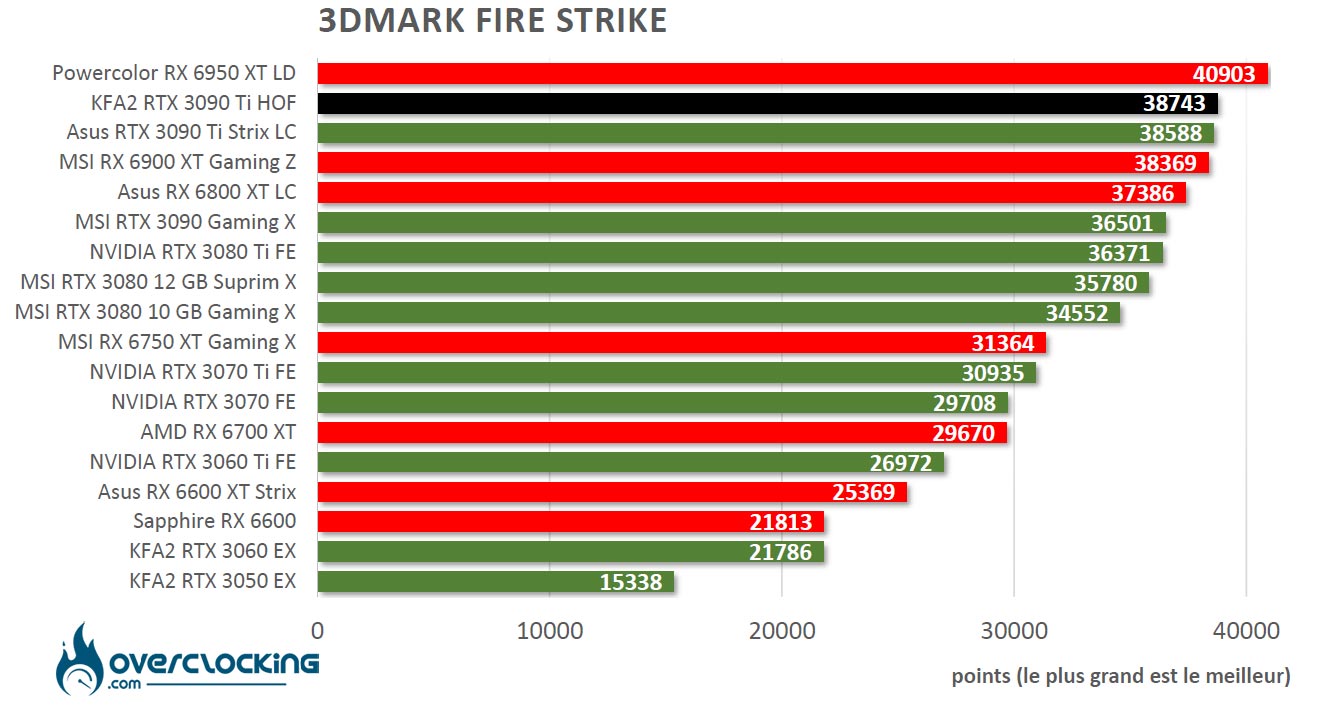 This is the first benchmark we’ve run with this RTX 3090 Ti and as we suspected, it manages to catch up with the RX 6900 XT and overtake it by a short head. But since our test of Powercolor’s RX 6950 XT Liquid Devil, that’s the new king of this benchmark. 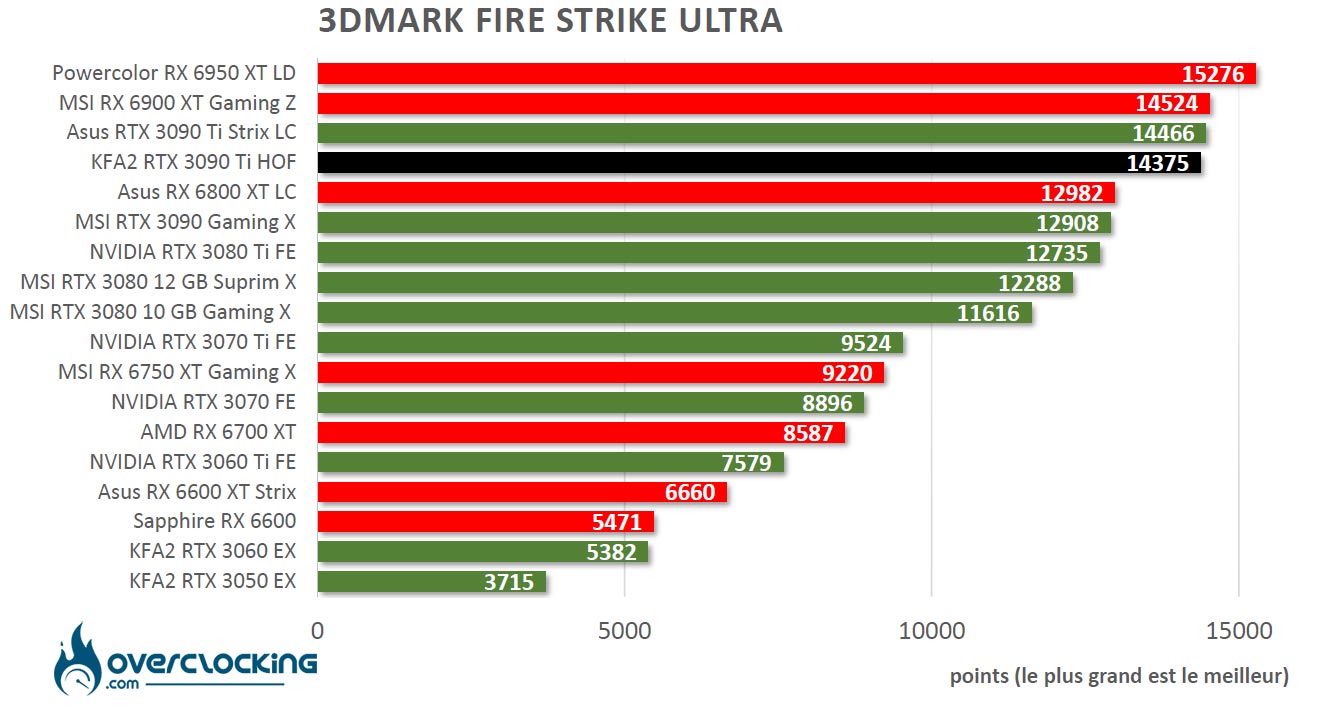 The same is true of Fire Strike Ultra, although here it is the RX 6900 XT and RX 6950 XT that take the top two spots.

The second test is 3DMark Time Spy. Although this one is done in 1440p, it is especially special because it uses DirectX 12. It consists of two graphics tests and a CPU test. As with Fire Strike, don’t forget to disable the demo. These first two benchmarks are provided by UL Benchmark. 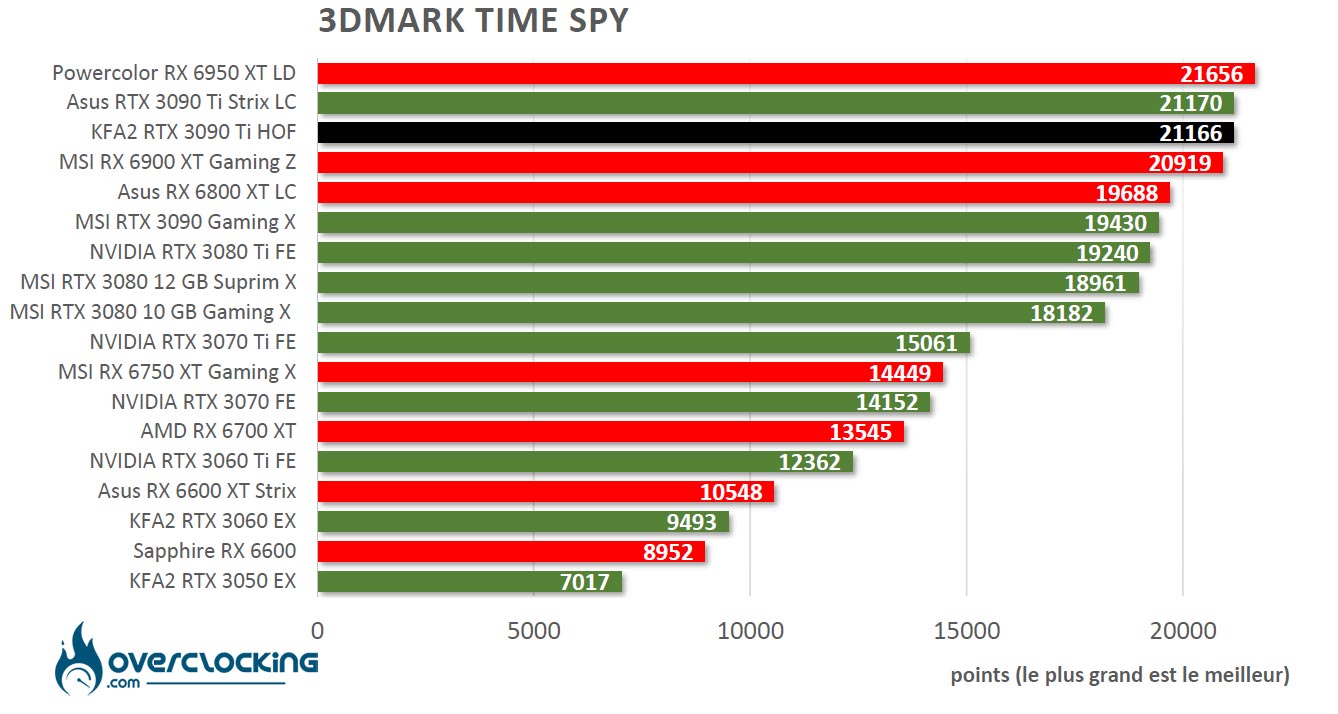 The performance obtained in Time Spy is always fairly representative of what we will get in games. Here we can see that the KFA2 RTX 3090 Ti HOF is in the top three. So we should end up with fairly close results in the games we test. 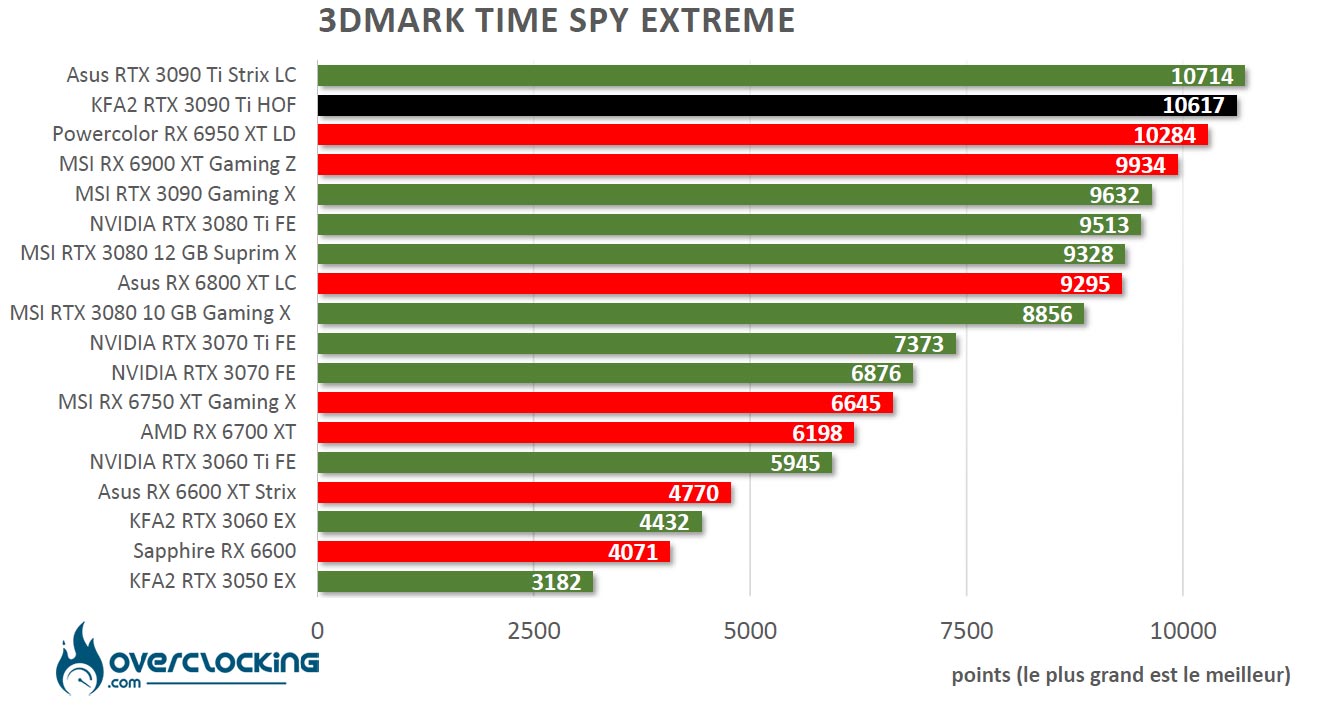 Under 3DMark Time Spy Extreme, our sample of the day scores 10617 points and beats AMD’s RX 6950 XT for the first time. 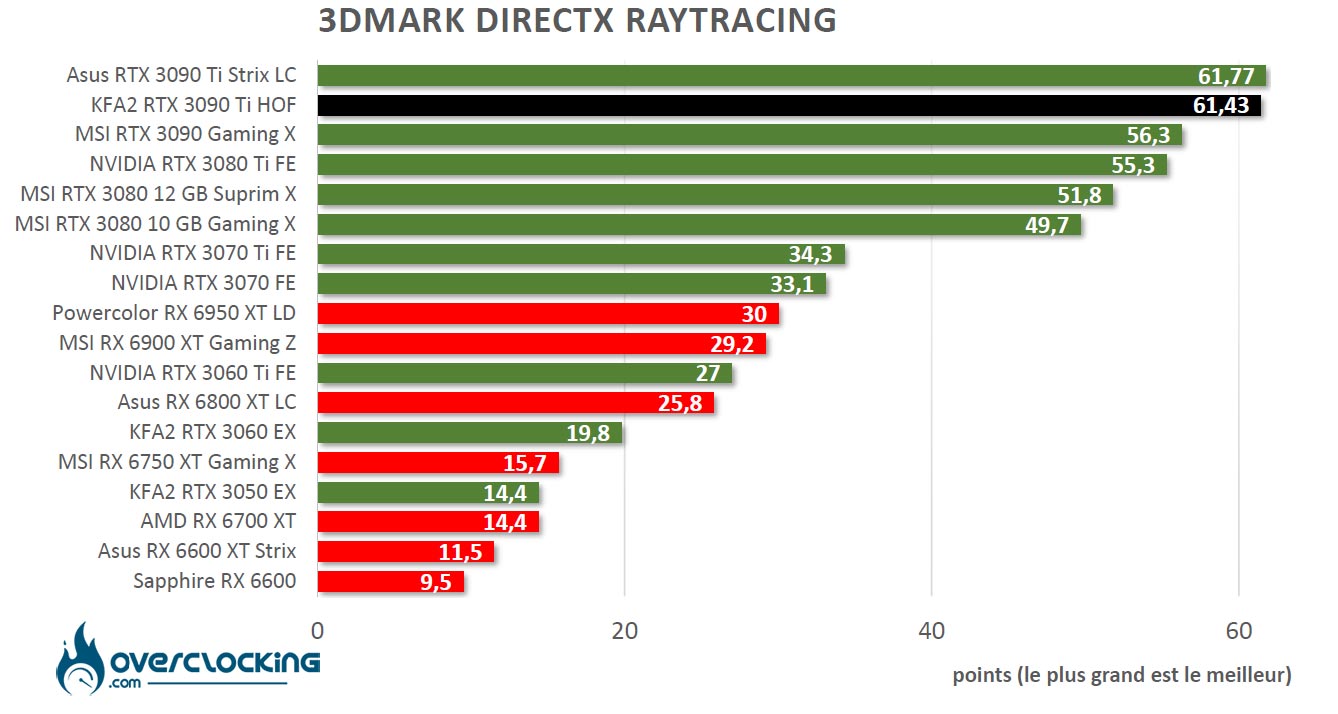 The advantage of Ray Tracing is still for team green, with the RTX 3090 Ti breaking the 60-point barrier for the first time with a total of 61.43 points for this sample.

Here is the new test we added to the synthetic benchmarks: Mesh Shader. We added it because it is supported by AMD’s RDNA 2 architecture and therefore our RX 6000. It allows us to analyze the level of performance of the GPUs concerning this functionality. As a reminder, it allows to exploit more complex calculations at the geometry level, in a more flexible way, for each meshlet . The result displayed is the one with the Mesh Shaders active. 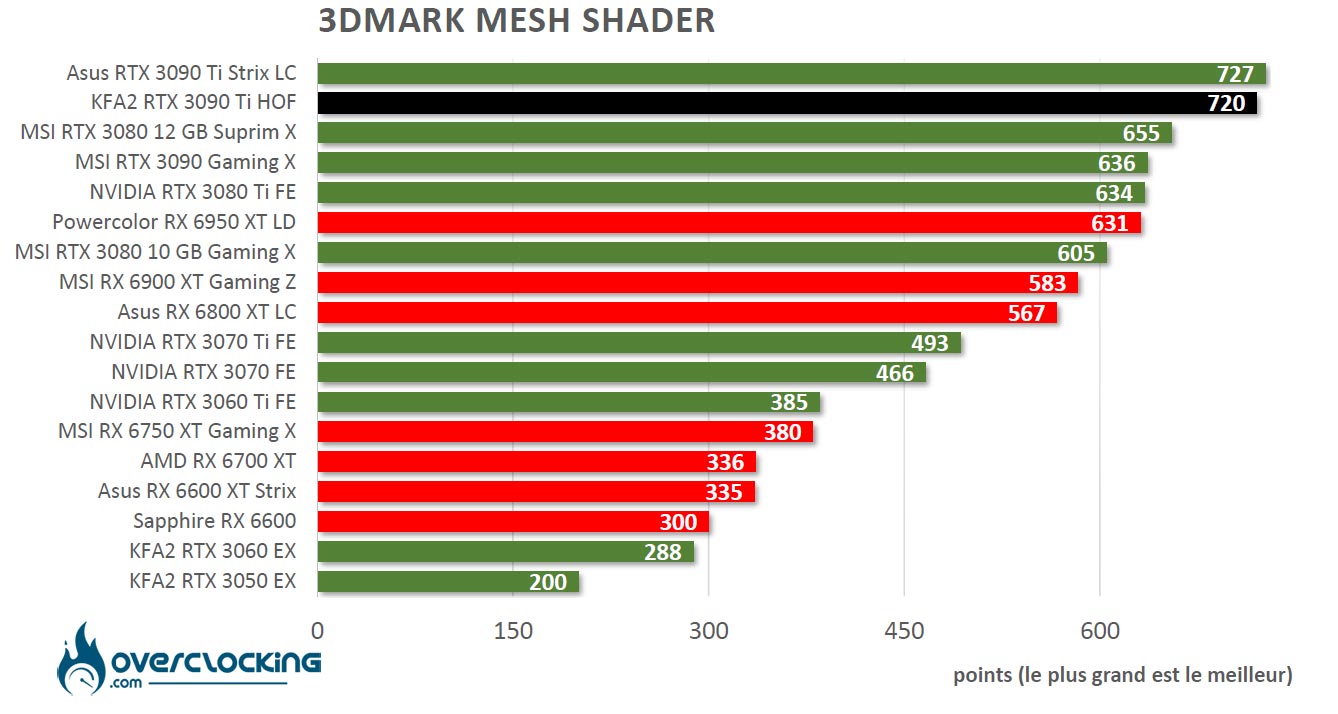 Our KFA2 RTX 3090 Ti HOF scores 720 points, almost as much as the Strix LC but leaving the other models far behind.