For the fan tests, we follow roughly the same basis as our CPU cooling tests. So, we test everything on our Ryzen 7 1700X with a consumption of 95W only on a Noctua NH-U12A chromax.black. The goal is to be dependent on the fan in order to highlight the differences in performance from one fan to another.

The AIO was used as a basis for the test of fans that have died, so we start again on a sound basis. To compare our Corsair fans, we find the ToughFan 12 from Thermaltake and the BioniX 120 from Arctic.

As we can see, from a speed point of view, the AF120 Elite from Corsair is the slowest fan in our selection. At full speed, we measure less than 2000 rpm against 800 rpm at low speed. At medium speed, it reaches 1300 rpm. In fact, it offers a similar profile to the Thermaltake fan, but with a slightly lower maximum speed.

The noise measurements are made at 40 cm from the sound source in the direction of suction of the fans. The interest is twofold: this way we can measure as many differences as possible from one model to another, and we are not disturbed by air movements.

Regarding noise, unfortunately, the Corsair fan is the loudest. In push, it tickles our sound meter more than a duo of ToughFan 12 from Thermaltake. In duo, it is even worse, at low rpm, it does not go below 31 dB. In absolute terms, the noise won’t make you deaf, that’s for sure, but in the face of the competition, it’s a pity.

We attack with the temperature readings with our 125W profile. Here the heat release is important, let’s see how our fans do! This is the most interesting test to highlight the performance of the fans.

In terms of temperature, our reference of the day is doing pretty well since it is the one that manages to cool our NH-U12A chromax.black better… Especially on its highest speeds. Nevertheless, at low rpm, theArctic BioniX 120 does slightly better, helped by its 200 rpm more.

In push, the same observation: a willing fan on its highest speeds, but which is on a par with the Arctic at low rpm.

On this performance/noise ratio graph, we remind you that it is best to be placed as far to the bottom left of the graph as possible. For the reading, the leftmost point symbolizes the ventilation in 12V, the one in the center the ventilation in 8V and the rightmost in 5V. 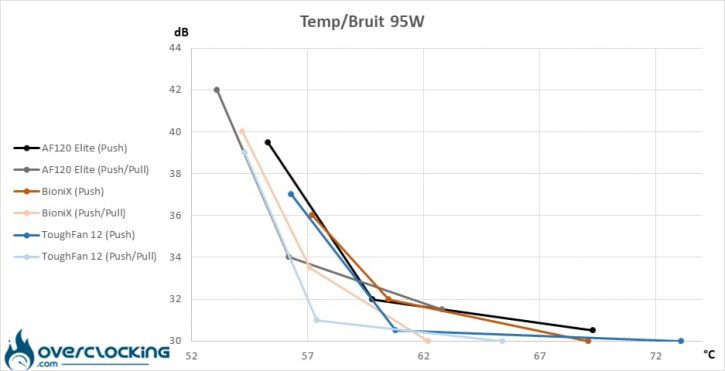 On its own, our AF120 Elite is in the middle of the pack, but is a bit more capable at high speeds. At medium speed, our three fans are fighting each other, while the Thermaltake runs out of steam at low speed.

Otherwise, in push/push , we note a good score at high speed, nevertheless, it is in the lowest speeds that it fails. The noise generated is a penalty, especially since reducing the speed of the fans will be problematic from a thermal point of view.