This Tuesday, May 10, during the Intel Vision, the brand has officially launched its new high-performance server processors: Alder Lake HX. 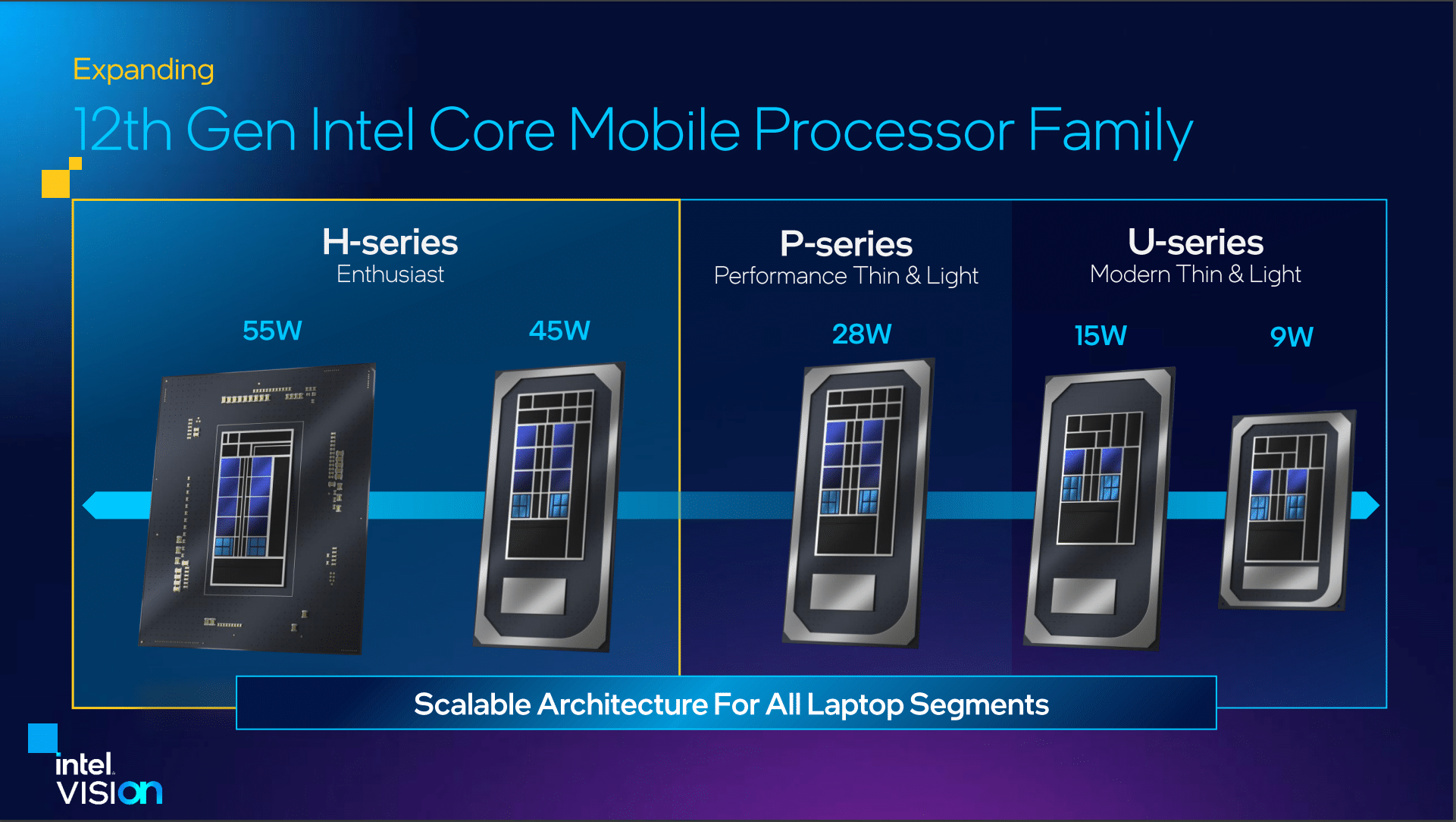 Completing the mobile range preceded by the U/P versions and completed with the H/HK, the Alder Lake HX (55W PBP) pushes the performance of these twelfth generation Intel processors to the maximum on laptops. 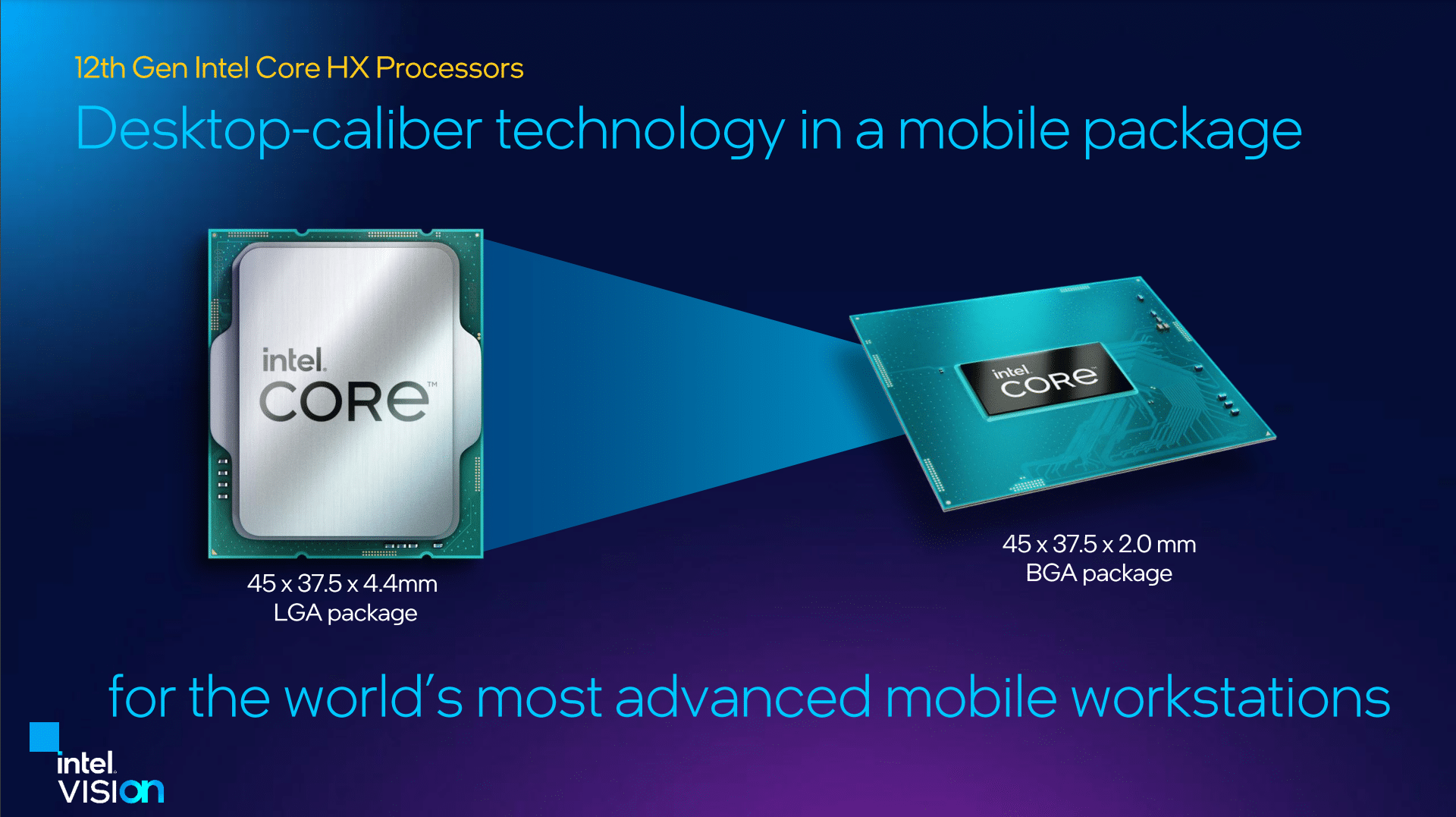 Derived from the desktop, with an almost identical package and the change from LGA to BGA, we are according to the brand in the presence of the fastest mobile processor with unmatched performance on this platform against the predecessors in Rocket Lake (11980K) or the competition from AMD (6900HX) and Apple (M1 Max). 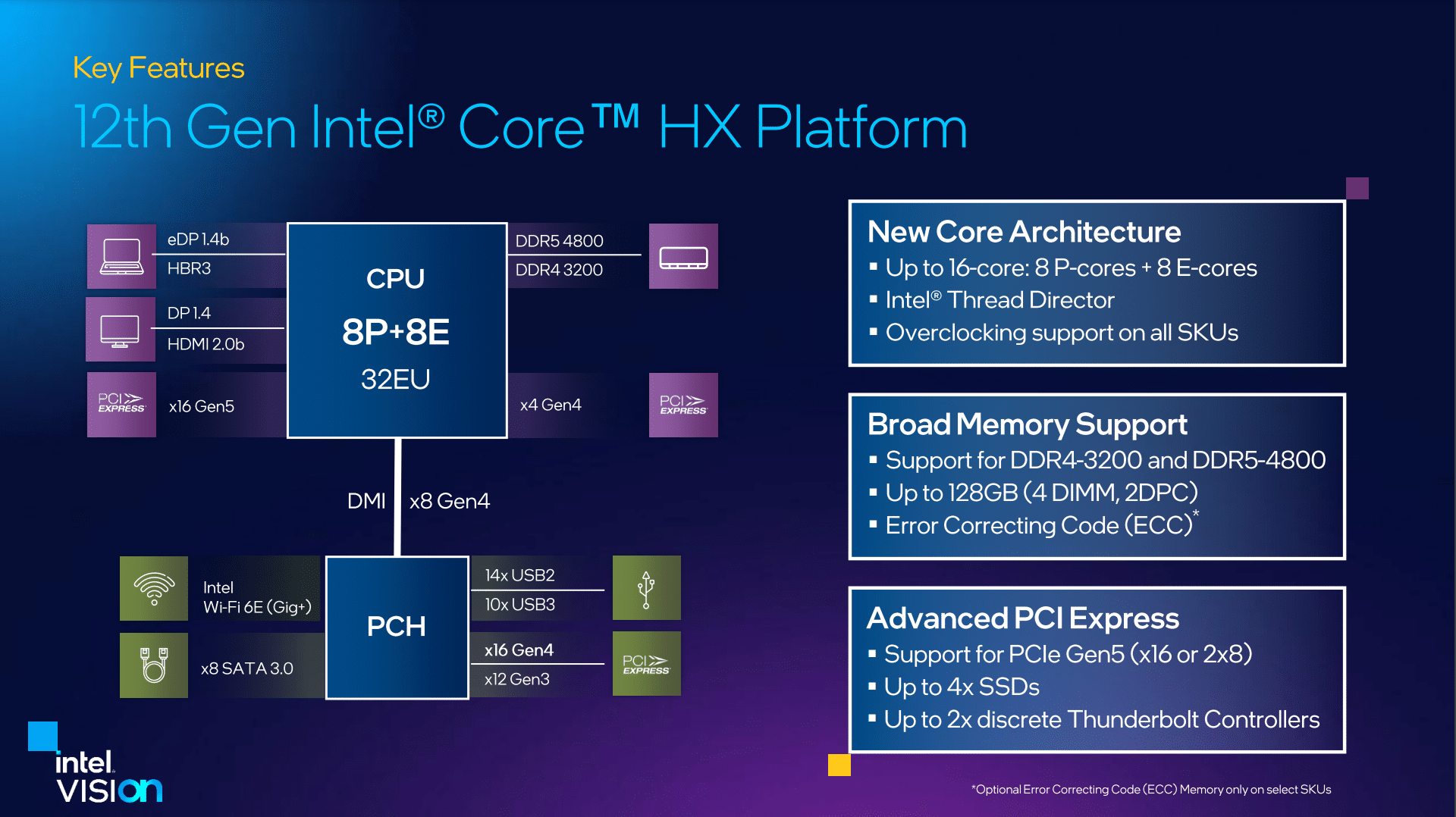 The platform also evolves with some changes. We are entitled to 16 cores (8+8) against 14 previously (6+8), with overclocking unlocked for all models. The support of ” Low Power ” memory is abandoned to leave only DDR4-3200 and DDR-4800? Finally, the arrival of PCIe 5.0 on mobile with 16 lines to accommodate up to 4 SSDs or 2 Thunderbolt controllers. 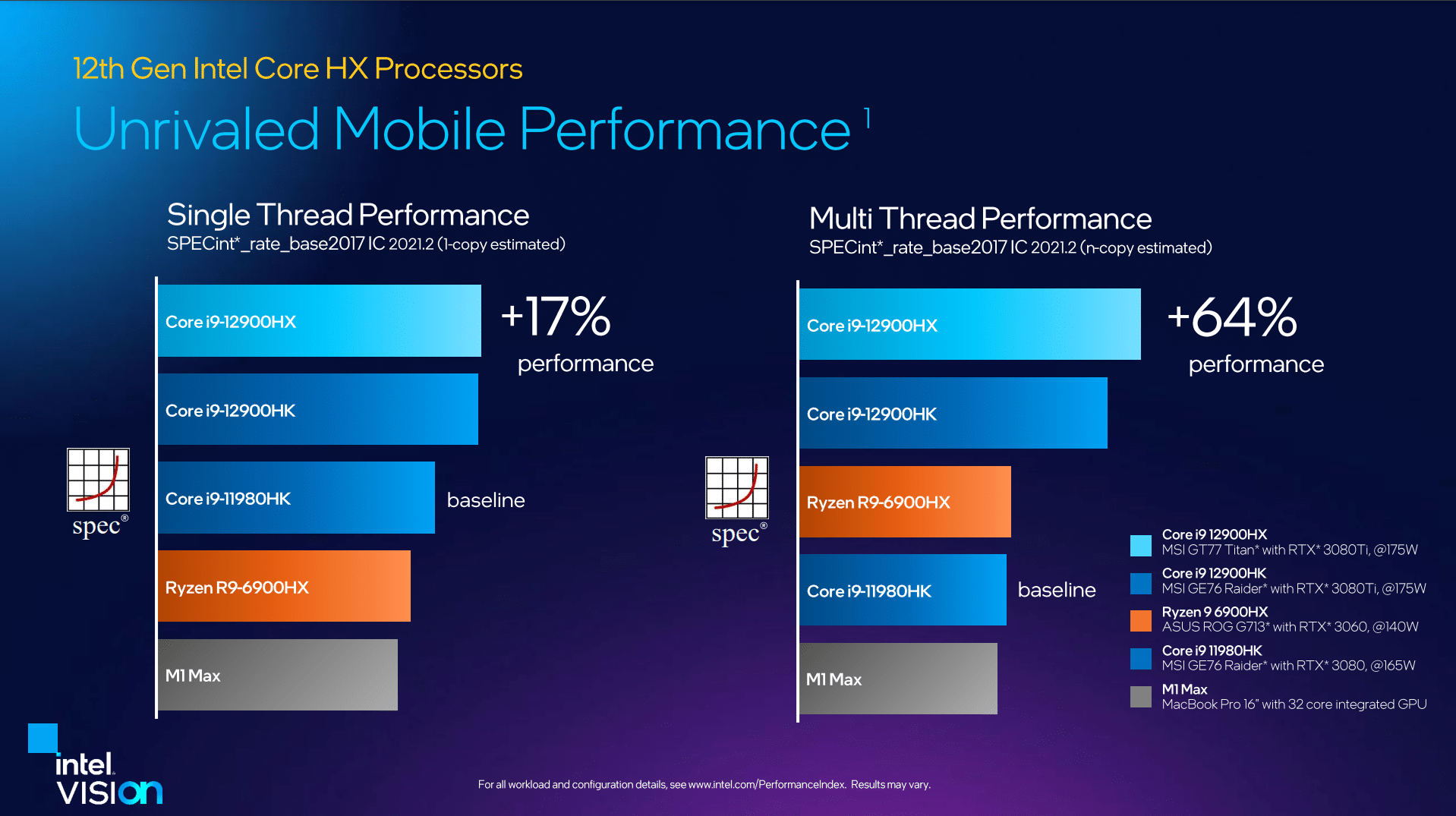 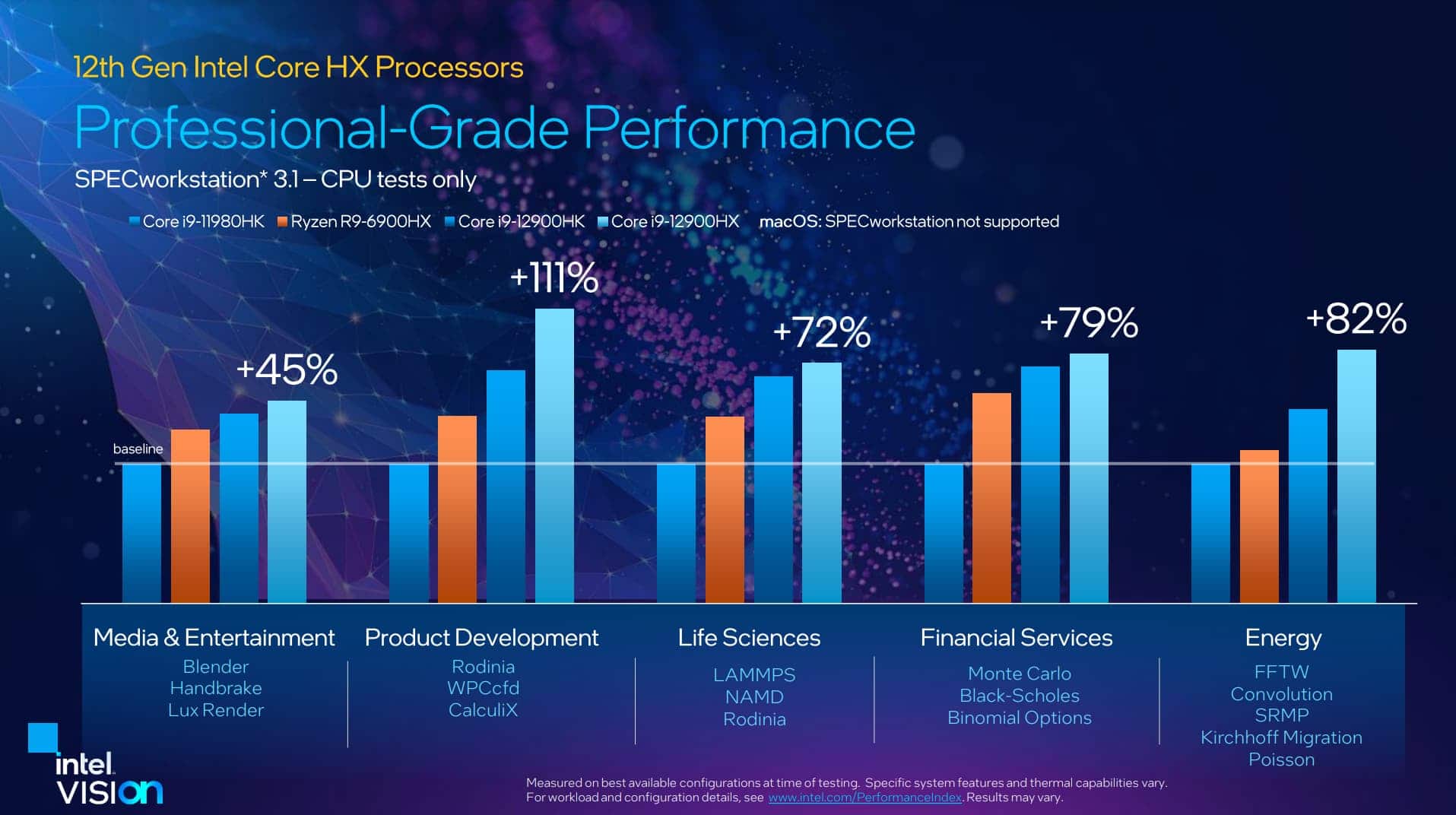 We talked about it before but the performance is there. Taking the lead in Single Thread and blowing it up in Multi Thread on SPECint 2017. The observation is the same when switching to pro software with between 45% and 111% higher performance (compared to the i9-11980HK reference). The addition of the 2 performance cores thus doing the 12900HX a good service compared to the 12900HK. 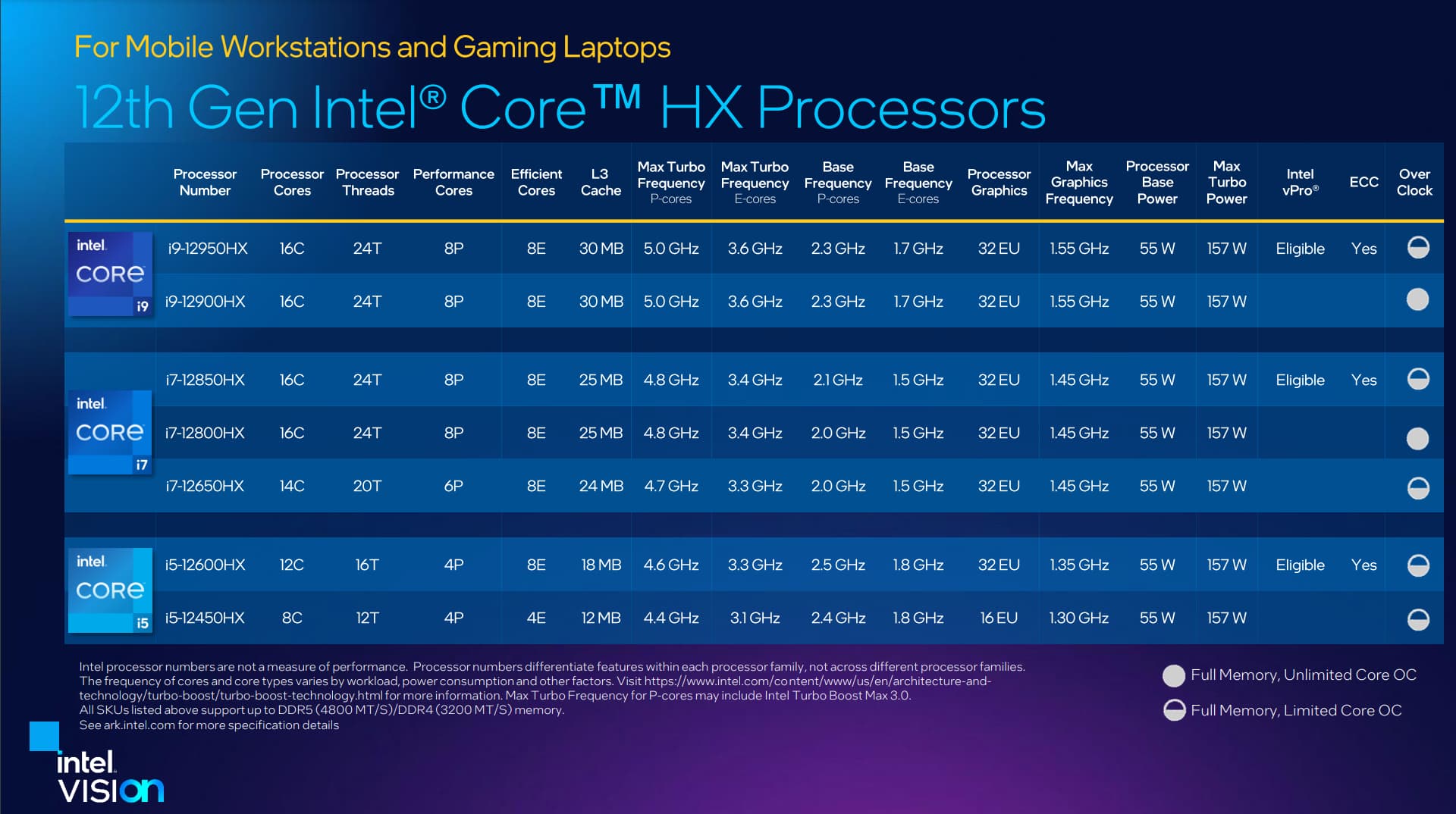 Finally, seven new models are launched including three with vPRO, ranging from the i5-12450HX in 4+4 with a frequency Boost to 4.4 GHz on the performance cores to the i9-12900HX/12950HX whose frequency can reach 5 GHz, with a PBP for all of 55W and MTP of 157W. Regarding the overclocking, although unlocked it will be limited to the memory for 5 of the CPUs with only the i9-12900HX and the i7-12800 HX that will have them a possibility to increase the frequency of the cores.