Well, if you are a regular visitor of our site, you know how good we think of EVGA but for several months, we have no hope to see EVGA components in Europe especially after the closure of the GPU division. The only alternative now is to either know someone who lives in the US and can buy the component for you or buy it on the official EVGA ebay when exceptionally cards are available. This is what some of our Discord members did to get the EVGA Z690 Dark KingPiN. Listed in the USA at $829.99, shipping and taxes made the bill rise to 1085 euros.

We are several Europeans who jump at the opportunity as soon as EVGA and especially Jacob post pictures especially of the EVGA Z790 DARK KingPiN to leave a little comment asking when the cards will be available in Europe. As you can imagine, this question never has a “real” answer except for the first time at the end of December when Jacob announces the arrival of the cards at European distributors.

Then TechpowerUP posted a test of the Classified version of the Z790. Several European EVGA accounts re-share the link to the article and so, as usual, we ask the question about Europe.

New surprise since EVGA Germany and UK seem to confirm that the cards should arrive which seems to confirm Jacob’s words. We are still skeptical but we have to admit that the cards are still in stock in the US and that it has been a long time since this was the case. Usually, the stocks of the last generations are emptied in a few hours. And then, this morning when we woke up, while waiting for this brief to be reread and validated, Jacob reconfirms the arrival of the cards after the Chinese New Year. 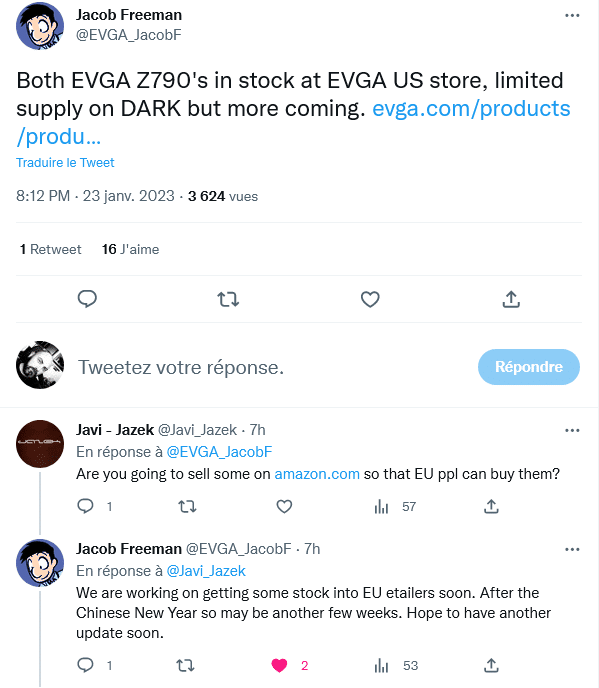 We will of course keep a close eye on it and one thing is for sure, if these cards do arrive in Europe, count on us to test them!