A new leak concerning the future cards based on Ada Lovelace GPU from Nvidia mentions a new variation of a GPU of the series. This variation would be the AD102-450-A1 chip in its full version with 18176 CUDA cores. The card built around this GPU would have 48 GB of GDDR6X memory at 24 Gbps. Finally, the icing on the cake, the beast would draw 800W of power which is obviously a new record. Even if the rumor comes from @kopite7kimi whose reputation is well established, we must wonder about the positioning of this future card. Will we see the return of a Titan for the RTX 4000 (a variant that we have not seen for nearly 4 years). Others are talking about a major upgrade for the 4090 Ti, which would then have twice the ram of its big sister, the 3090ti. Such an increase in ram would obviously lead to a significant increase in the final bill. 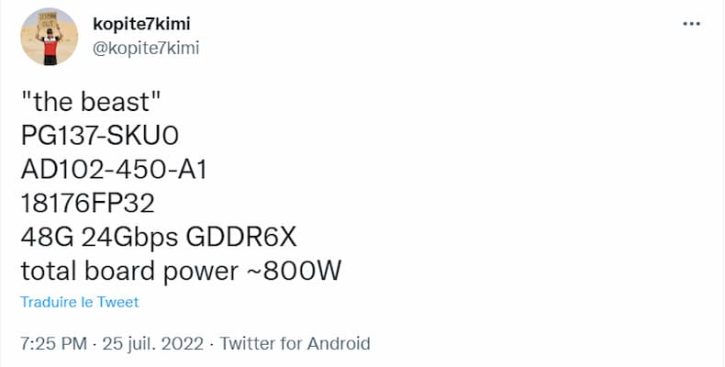 RTX 4000: the return of a Titan with stratospheric characteristics

If this leak is confirmed, we would have with this future card a monster offering 11% more CUDA cores compared to the future RTX 4090, a faster memory (GDDR6X at 24 Gbps vs GDDR6 at 21 Gbps for the 4090). Data that let us think that the card could reach a bandwidth of up to 1.1 TB/s. As for the price, even with a softening climate in recent weeks, the final bill will undoubtedly be very copious.