A few hours ago we published a short article about a rumored RTX 3090Ti. Among the curiosities in this rumor was PCIe 5.0 and its possible new power connector standard. This new PCIe Gen5 power connector standard is supposed to solve one of the biggest drawbacks of the current 8-pin power connector: insufficient power (up to 150W) for most cards. A situation that regularly leads to a mishmash of cables with sometimes up to three of these connectors to power a “big” GPU. This new connector would have the sweet name PCIe 12VHPWR.

A new connector is on its way and the 3090 Ti could be the first one with this connector. The PCI Express 12VHPWR connector has 16 pins (12 for power and 4 for signal), this connector is not from any standard, it is something completely new. The PCI-SIG specifications define that each pin can handle up to 9.2A, which means a total of 55.2A at 12V. This gives a maximum power of 662W, but the official specification says that the maximum power will be 600W. Some manufacturers, such as Amphenol, have already started listing the specifications of the 12VHPWR connector: Amphenol ICC introduces the Gen 5 connector system, Minitek® Pwr PCIe®. This new EMC 5.0 PCI Express® 12VHPWR hybrid auxiliary connector and cable assembly supports 600W GPU cards. The 12VHPWR connector is not designed to fit the older PCI Express® 2×3 and 2×4 12V auxiliary power connectors. The power pins of the 12VHPWR connector have a 3.00 mm pitch, while the contacts of an older 2×3 and 2×4 connector are on a larger 4.20 mm pitch. The new PCIe® connector system (CEM5) is designed for power supply applications with a current rating of up to 9.5 A/ pin (12-pin live) and the 4 signal pins supporting signal transmission.

Igor Wallossek from Igor’sLAB was able to project himself by working on schematics based on the information gathered about the new connector. He also confirms that there is a new standard to come and that it could be generalized to all new graphics cards in 2022. 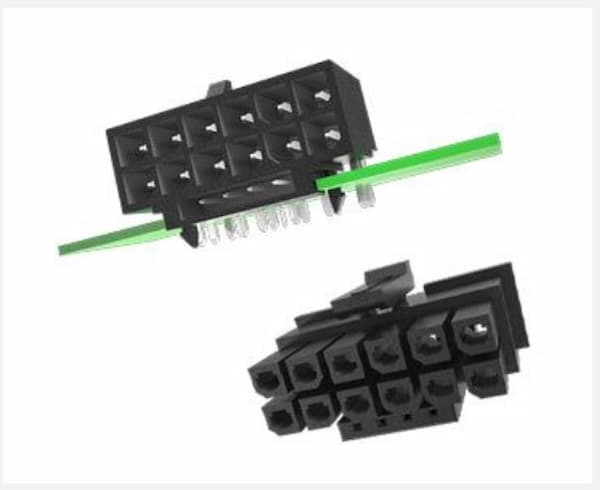 On the graphics card side, this connector cannot be considered small. However, its use on the PCB of new cards will occupy a width of 18.85 mm. This is much less cumbersome than the implementation of two or three 8-pin connectors as at present. We can therefore also expect a new range of power supplies to offer this cable. A transition could give rise to a few adapters for a while…