The adventure continues with the RTX 4090 Blower that we saw a while ago. A redditor by the name of BottleneckEvader was able to get hold of this model to do some testing. As you can imagine, such a heatsink on such a card is not a miracle, it’s hot and noisy! 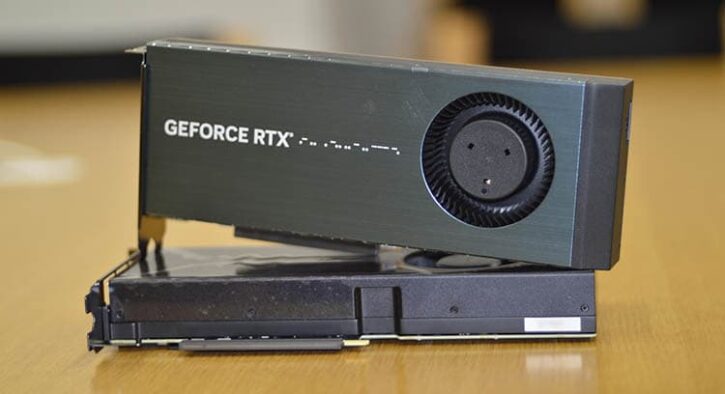 Obviously, this card is a rather particular model since it is clearly not available for everyone. To get it, it seems that you have to be part of a restricted circle of customers which includes BottleneckEvader. Indeed, it would work in the field of deep learning.

Anyway, the person was able to spend the equivalent of $2675 to acquire this model. And according to the few readings made, this card turns out to be a disaster in terms of nuisance.

As far as noise is concerned, you should know that a radial fan is never totally silent, so imagine one that works at 5200 rpm! To get an idea, the owner had to use noise reducing headphones. Next to that, the temperatures are not very good either, especially for the memory. Here, under Furmark, the GPU was running at 71.1°C while the memory chips were running at 92°C on Time Spy Extreme. In any case, the power consumption was limited to 450W without any possibility to increase it… Considering the heatsink, it is understandable! 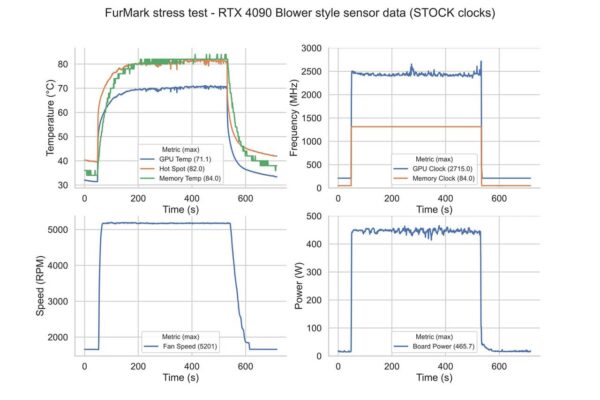 Finally, on 3DMark Time Spy, the card reached 35908 pts against 36956 pts after overclocking. Moreover, the OC must not have been very significant considering the small margin of maneuver proposed by the card… Both on the power consumption side and the cooling side.

However, for people who have a professional use of their PC, it is a card… How to say… Interesting? In any case, it is one of the very few RTX 4090 to offer compact dimensions with a strict double slot format!