The Akasa brand also announces all-in-one watercooling kits under the name Soho. It will not be necessary to confuse them with the fans marketed under the same name. Anyway, two versions are announced, one in 240 mm and a second in 360 mm! 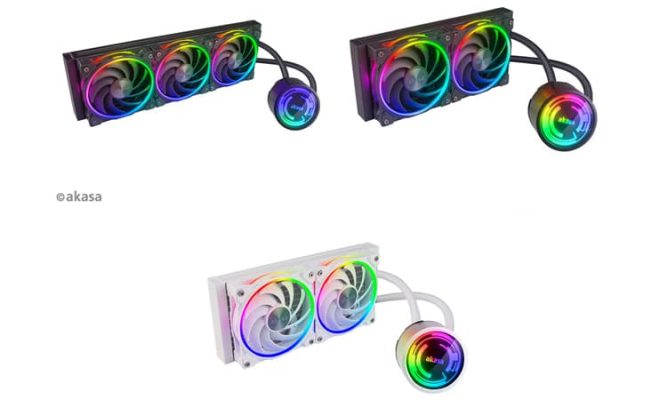 With its new watercooling kits, Akasa launches three new references in 240 mm and 360 mm. And on the two 240 mm versions, one of them is white. Anyway, our little AIOs have the same base with an aluminum radiator measuring 27 mm thick. The same goes for the pump, which shares the same design from one reference to the other. Finally, we will retain the use of two or three fans in 120 mm. These will operate from 500 RPM to 2000 RPM. At full speed, the air flow will rise to 52.9 CFM and the static pressure will reach 1.75 mmH2O. All in all, these figures are quite classic. For the assembly, we will find a remote control to control the RGB part present on the pump and the fans. As for the compatibility of the sockets, the brand mentions support for the LGA-2000, LGA-1700 and LGA-1000 platforms. At AMD, we will find theAM4 and de facto theAM5, the two sockets sharing the same mounting system. Prices will start from 120,95 € for the 240 mm black model. The white version will be a bit more expensive with 125,95 €. Finally, we finish at 165.95 € for the 360 mm.

Here and there are the technical data sheets of Akasa!