When you say new generation, you automatically say many technological innovations and this RTX 4080, like its big sister the RTX 4090, are no exception to the rule. We’ll try to list the most important ones in this more theoretical page.

On September 21st at 5pm, NVIDIA unveiled a part of its future range of graphics cards built around the “ADA Lovelace”. Technically, this chip is out of the ordinary with its 76 billion transistors, its N4 engraving by TSMC, its Shader Execution Reordering, its 90 TFLOPS, its 200 RT TFLOPS, its 1400 Tensor TFLOPS and a maximum of 18432 CUDA Cores in a single GPU. This is quite impressive compared to the previous generation Ampere.

The chip is organized into 12 Graphics Processing Clusters (GPC) each containing 72 Texture Processing Clusters (TPC) with 144 Streaming Multiprocessors (SM). The Streaming Multiprocessors benefit from a new technology called Shader Execution Reordering (SER) which allows to multiply by two the Ray Tracing operations. We can also notice that the chip of the RTX 4090 is amputated allowing perhaps to see a future RTX 4090 Ti land.

These new RTX also land with 4th generation Tensor Cores, which will be very useful for DLSS and DLSS 3 AI as well as 3rd generation RT Cores which will allow to double the performance of Ray Tracing. In addition to the evolution of generation, their number also increases compared to the previous generation depending on the model.

By the way, here is a comparison table to judge the differences between these cards. 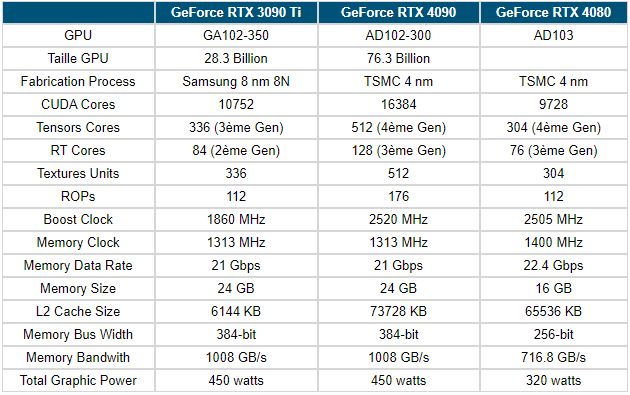 DLSS 3 is here and already operational:

One of the announcements of NVIDIA during its conference is the arrival of DLSS 3. Be careful though, this one is only compatible with the RTX 4090 and RTX 4080. Owners of a previous generation card will be happy with the DLSS 2 that NVIDIA will continue to develop in the coming months.

As a reminder, until now, the principle of DLSS (Deep learning super sampling) was to allow a gain in terms of FPS by replacing the antialiasing TAA. The idea is to calculate the rendering in a lower definition than that chosen in the parameters and then to replay it in the definition said using an AI applied via the Tensor Core while maintaining an image quality as perfect as possible.

Today, with the arrival of DLSS 3, things are changing even if the fundamental principle of increasing the number of FPS is still the main reason. The novelty comes from the fact that DLSS 3 allows you to add whole intermediate images and no longer pixels. This increases the number of frames per second and consequently the fluidity. To achieve this, DLSS3 uses an optical flow gas pedal integrated into the new RTX 4000 architecture. This is why previous generations that do not have this will not be able to benefit from DLSS 3. We will have to be careful during our tests and compare what is comparable because yes, of course DLSS 3 will be more powerful but it is difficult to judge it on the Ampere generation which does not support it.

Even if the main function is to increase the number of FPS, NVIDIA also reminds the importance of latency. We had already dealt with this subject by talking about Reflex. To summarize simply, the principle is to reduce the latency in games as much as possible, that is to say the time that elapses between the moment you click on the button of your mouse and its manifestation on the screen. In order to be able to perform all the readings, a compatible mouse will be necessary.

The latest advances from NVIDIA could turn the world of e-sports upside down, as we could see 1440p 27″ displays replacing the current 1080p 25″ displays. Finally, NVIDIA has already announced over 35 games that are compatible and ready to use DLSS 3. We will of course add games that support DLSS 3 to our tests. Of course DLSS 3 games are backwards compatible with DLSS 2 technology.

NVIDIA now integrates its 8th generation NVENC encoder with AV1 which is 40% more efficient than H.264. The arrival of AV1 will be very useful especially for streaming.