And it’s quite surprising to know where the leak comes from, since it is European and comes from Igor Wallossek, the person in charge of the German site Igorslab. It’s true that Igor has accustomed us in recent weeks to offer information on the next Intel and AMD processors, but from there to unveil the presentation slides of the next Intel Raptor Lake 13th generation processors, we are surprised.

The most interesting slide, which confirms what we already knew, is the range of processors. These are the processors that will be launched at the beginning but it is likely that others will be added after the official launch. So we find the i9-13900K, i7-13700K and i5-13600K also available in “KF” version.

The top model is the i9-13900K(F) which has 24 cores (8 P-cores and 16 E-cores) . The frequency on a single core can reach 5.8 GHz thanks to the Thermal Velocity Boost technology. The TDP can reach 253 W(Maximum Turbo Power). It also supports DDR5-5600 or DDR4-3200 memory. As a reminder, these Intel Raptor Lake processors will be compatible with motherboards with Z690 chipset.

The arrival of Intel Raptor Lake processors is accompanied by the new Z790 chipset. One of the slides unveiled highlights the comparison between these two chipsets. 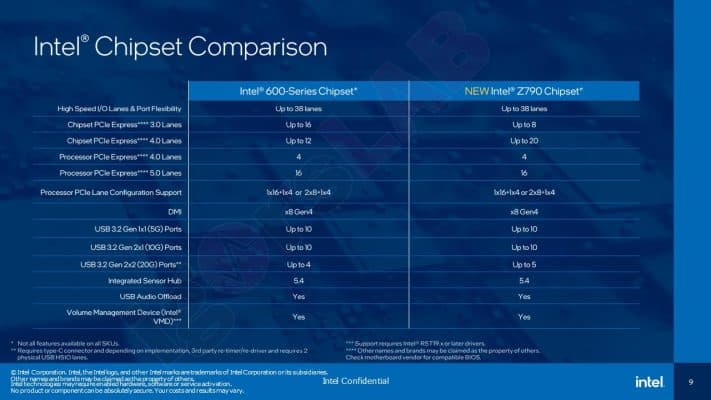 All the slides are available on the website of our German colleague. We have to wait until the official launch to share with you the performance of these new processors.