With just a few hours to go before the official announcements, it seems that Intel’s press release about its ARC GPUs has leaked faster than expected. Don’t get too excited, no price or performance but hints about partnerships with hardware manufacturers and the gaming industry. 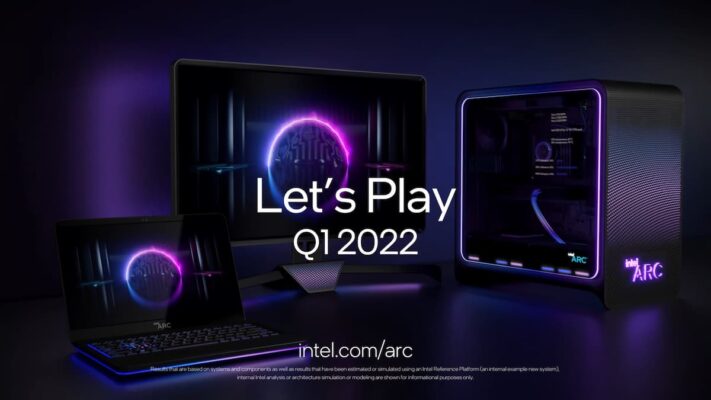 There would be, therefore, from the launch nearly 50 references of laptops and desktops designed with an Intel Arc graphics card. Among the brands involved we have, for example, Acer, Asus, Clevo, Dell, Gigabyte, HP, Lenovo, Samsung, or MSI.

50 references at launch and Death Stranding

for the XeSS On the hardware side, if Intel will confirm that it already delivers Arc GPUs to its OEM customers, another important announcement should concern its agreements with the gaming world. The blues are expected to onboard partners to push the company’s XSS super-resolution technology into the gaming industry. Intel lists a number of game studios such as Codemasters, PUBG Studios or Techland and Ubisoft to work on implementing XeSS. The most important title that will be announced is Death Stranding Director’s Cut. Here is the translation of the leaked Intel press release, revealed by Videocardz. Of course at this time, we still consider these elements as rumors that will have to be confirmed in the next few hours.

Intel’s press release on the launch of ARC

Intel Arc Graphics is ready to transform the graphics card industry Intel has ushered in a new era in the dedicated graphics card market by announcing the delivery of Intel Arc Graphics (codenamed Alchemist) to OEM customers. Intel Arc is the brand name for Intel’s next high-performance consumer graphics product and offers a new option to the industry, including many of Intel’s fully dedicated graphics platforms. With the announcement of more than 50 new notebook and desktop designs featuring Intel Arc graphics solutions, including those from Acer, ASUS, Clevo, Dell, Gigabyte, Haier, HP, Lenovo, Samsung, MSI and NEC, it’s an exciting time for gamers and designers worldwide. Intel Graphics Arc will bring advanced features such as RayTracing with hardware acceleration and supersampling (XESS) to the high-end industry. Intel announced the push of its ISV partners with its AI-based XeSS scaling technology, which is currently integrated into many game titles via a range of publishers, including exclusive integration into Kojima Production’s Death Stranding Director’s Cut, the title also includes optimizations for 12th generation Intel Core processors. “We are excited to announce our collaboration with Intel for the Death Stranding Director’s Cut edition on PC. Death Stranding is an extremely popular game with PC gamers and we are excited to see how Intel’s new XeSS technology will enhance the gamer experience. the Director’s Cut edition,” said Neil Rally, president of 505 Games. XeSS adoption by game studios continues to grow. Studios that have committed to supporting the technology include 505 Games, Codemasters, EXOR Studios, Fishlabs, Hashbane, IOI, Illfonic, Kojima Productions, Massive Work Studio, PUBG Studios, Techland, Ubisoft and Wonder People. Intel Deep Link technology harnesses the full power of the platform to further accelerate a number of key workloads when paired with a compatible Intel Core processor. Intel Deep Link technology extends Intel’s years of platform leadership by leveraging multiple processing engines, a common software framework and Intel platform expertise to bring new capabilities and improved performance to PCs with Intel Arc Graphics and Intel Core-compatible processors. Blackmagic Design’s DaVinci Resolve will support Deep Link Hyper Encode, which uses integrated and discrete graphics processors together to accelerate creation by simultaneously encoding the same video stream. “We are excited to optimize DaVinci Resolve for the latest Intel Arc graphics and next-generation Quick Sync video technology,” said Rohit Gupta, director of DaVinci Software Engineering.

RELATED STORY
RTX 4070 in 4 months: doomed to be too expensive?
Powered by Inline Related Posts