Graphics cards based on the Intel Arc A380 GPU are being tested more or less officially in the Chinese market, confirming the priority release of Intel cards in this territory. The A380-based cards are expected to be positioned on the entry-level. Especially in front of the small RX 6400 from AMD and the “delayed” GTX 1630 from Nvidia.

The tested card is the GUNNIR A380 Photon, which is so far the only custom card based on the Intel GPU. We have been hearing about this model for a while now. For the purpose of testing, the card was mounted on a PC equipped with a Core i5-12400, a B660 motherboard with DDR4 ram. The comparison was made with NVIDIA RTX 3050/GTX 1650 and AMD RX 6500XT/6400. On the synthetic benchmarks, the results of the small card are excellent. The card sometimes comes close with the RTX 3050 and far exceeds its other competitors. The “Port Royal” test specific to raytracing is very encouraging even if obviously the card from Nvidia is far above. 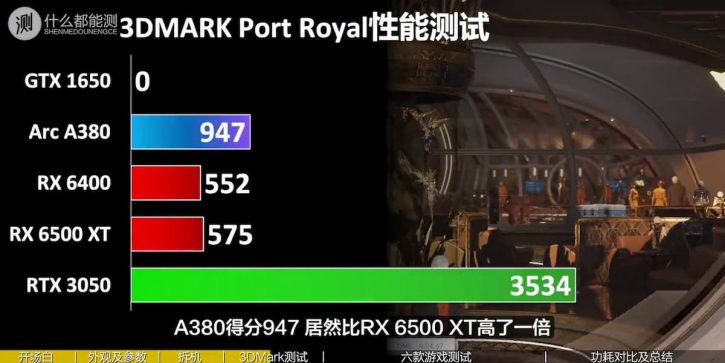 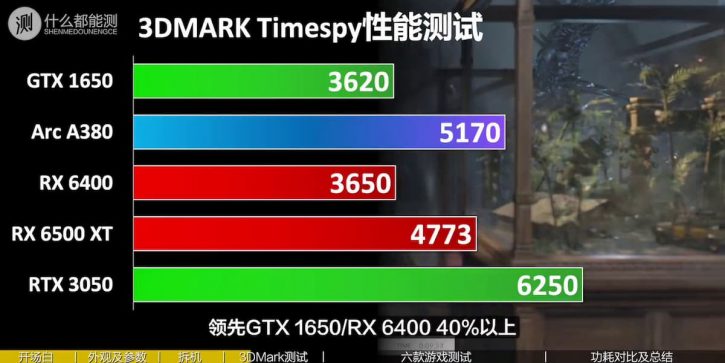 These are clearly interesting results for a card that should be positioned between 150 and 200€. However, when we get into the games, things become more difficult, confirming the problems encountered by Intel for the optimization of its drivers. The tests are on League of Legends, PUBG, GTA5, Tom Raider, Forza Horizon 5 and Red Dead Redemption II, all in 1080P. 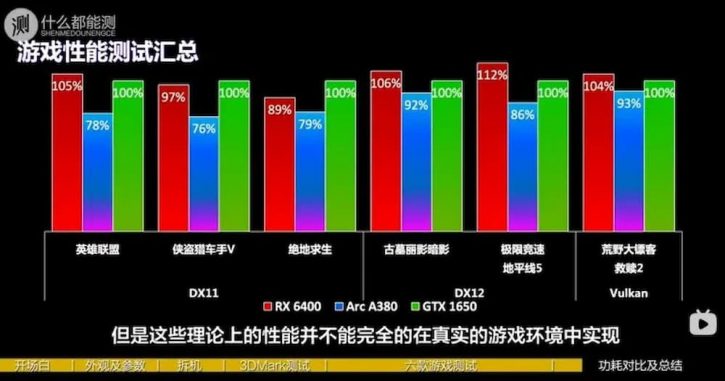 And even if you don’t know how to decipher Chinese, you’ll understand that the little Intel card is behind the RX 6400 and the GTX 1650 every time.

Gaming performance: Should we be worried? Frankly, no.

First of all, we have to be careful with these tests, especially when it comes to drivers. We don’t know which version was used and if Intel was able to deliver the latest versions. But we also know that optimizing a driver for a particular game can drastically change the performance. We have seen AMD cards make significant performance jumps in games with the arrival of a new driver. If the (very good) results of the synthetic tests are reliable and confirmed, the in-game results will be competitive in our opinion.