In the last few days, there is a wind of optimism in the hardware community concerning graphics cards. Walking around the Overclocking.com discord server, one overhears conversations raving about the green color of some resellers’ stocks, about prices that, according to the cousin of a deliveryman’s brother, should be dropping soon… In short, life seems to be good, some even going so far as to rave about the potential arrival of an RTX 3050 at “only” 500€. The “kids” who are mining with their RTX on daddy’s EDF account are also becoming more discreet and the hunt for GPU farms is on everywhere. So have we hit rock bottom, are we on a plateau, is the situation still tense? We’ll give you some facts so you can make up your mind about the current and future situation for the next few weeks.

One thing is unequivocal, it’s the drop in demand related to mining. There are several objective reasons for this trend. First of all,the transition to Ethereum 2.0 is getting closer every day, making the investment in GPUs for mining more and more uncertain. Added to this, a sharp decline in crypto values, including obviously the ETH which accumulates bad news since the end of the year with a willingness of several states to “break” the mining farms . This situation will therefore give back some oxygen to the market by slowing down stock rotations and forcing some traders to have a slightly lighter hand on margins.

…But production is not getting any better.

However, objectively, on the production front, the situation is not getting any better. TSMC did not set up any additional fabs between Christmas and New Year’s Day , and overall, the prices of all components are rising. A phenomenon that many analysts believe will last at least for the first three quarters of this year. Demand is still much higher than supply and this situation cannot lead to a decrease in prices.

However, certain signals are perceptible.

It is true that for almost a week now, stock levels at distributors and specialist retailers have been much higher. In these conditions, the customer has more choice, he buys less quickly and somehow “forces” the retailers to be more dynamic commercially. 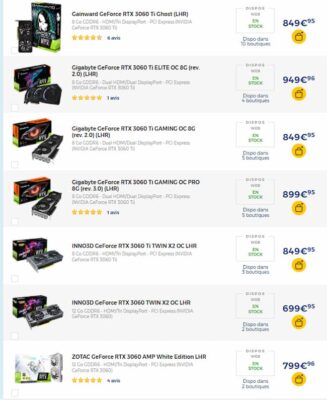 But this situation is actually cyclical. It reflects two events that artificially “boost” availability:

At Nvidia, Santa Claus is coming at the end of January.

First of all, the end of the fiscal year at Nvidia does not correspond with the calendar year. The green year ends on January 31. In these conditions, everything is done to deliver a maximum of GPUs in order to improve its balance sheet. This is not new at Nvidia and this phenomenon can be observed every year: January is often the best month in terms of delivery.

As you know, GPUs are part of the problem. Then the cards have to be produced and most brands use China for that. Every year, however, the pace of production is interrupted by the Chinese New Year celebrations. Last year the date in our calendar was February 12, this year it is February 1. Nvidia and the brands are in a race for deliveries since a few days. Indeed, the celebrations will last 16 days, until the Lantern Festival, which is the climax of the celebrations, on February 15, 2022.

Graphics cards: Better but not true.

So you can understand that the effect observed at the moment can in no way be considered as an underlying trend. From the end of January onwards, deliveries will fall and enter a tunnel of at least 3 weeks. The situation should become tighter again. On the other hand, it is not forbidden to hope for a certain relaxation given the relative technical unemployment of scalpers and miners. Traders will have to rediscover their trade: make offers, avoid over-margining, be more aggressive than the competition … All in a context that will remain bullish but perhaps a little less crazy.