According to IDC, worldwide shipments of gaming PCs and monitors are expected to remain strong through 2025. 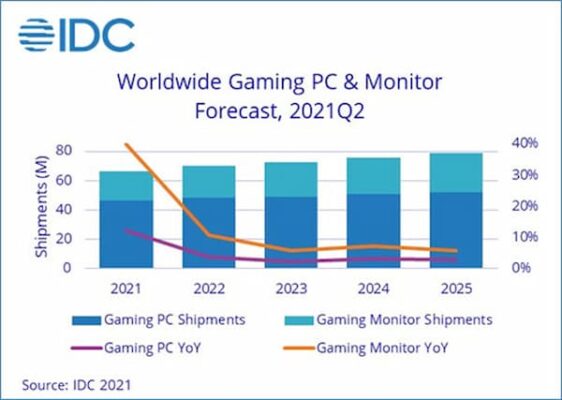 If we translate this into percentages, we have compound annual growth rates (CAGR) of 4.8% and 13.2% respectively.

Strong outlook despite disruptions and shortages

IDC bases its projections on the study of recent developments in the global market. Indeed, despite soaring logistics costs and component shortages affecting both PCs and displays, shipments in 2021 have remained strong. The second quarter of 2021 (2Q21) ended with combined shipments of 15.6 million monitors and gaming PCs, an increase of 19.3% over the same quarter in 2020 that some considered an “all-time high.” “Many have speculated that as the reopening slowly begins around the world, this growth could be at risk, but we just don’t see it.” Ryan Reith, group VP at IDC Mobility and Consumer. IDC’s other line of observation involves the evolution of average prices in these two categories. For gaming PCs ( again, fixed and mobile combined), IDC expects average prices to rise from $925 last year to $1,007 in 2025. On the other hand, in the gaming monitor market, the average price was $339 last year and is expected to drop to $309 by 2025. Finally, coming back to gaming PCs, IDC considers that the growth will be supported in large part by laptops, both in terms of volume and price.

As this study is global, we must expect strong disparities according to countries and geographical areas. IDC has not communicated, for the moment, on these details.