During the boring Nvidia conference, a hardware product for gamers was announced: the Asus Rog Swift 500Hz . Born from a collaboration between Asus and Nvidia, this reference is the G-SYNC display with the fastest refresh rate ever marketed. 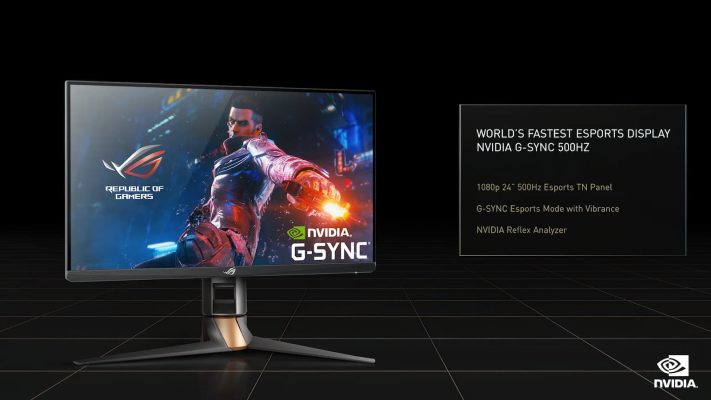 To do this, to hell with the technological prowess on the slab since it is a TN slab of 24″ with a Full HD resolution of 1920 x 1080 pixels that is used. This one is manufactured by AU Optronics. We might as well say it clearly, this monitor is only intended for a public practicing competitive gaming or engaged in the eSport circuit on titles like Counter Strike, Valorant or Overwatch. Obviously, to complete the marketing message, to fully enjoy the responsiveness of this display, you will need an Nvidia graphics card to activate me new eSport G-Sync mode as well as the Reflex latency reduction system.

launch message: At Computex 2022, we are introducing the newest member of the Nvidia G-Sync family: the Asus ROG Swift 500Hz gaming monitor. This 500Hz monitor was designed from the ground up for eSports, using a new “eSports TN panel” that offers maximum motion clarity. It also features Nvidia G-Sync Esports mode with adjustable vibration for eSports, and of course support for Nvidia Reflex Analyzer, which allows users to measure end-to-end system latency when using an Nvidia Reflex mouse and GeForce GPU. . The 500Hz G-Sync eSports displays are even faster, have even faster response times, and are specifically designed for competitive games like CS:GO, Valorant, Overwatch, and Rainbow Six Siege. Watch the video below to see how this next-generation display technology improves target tracking and allows competitive players to spot enemies even earlier.