EVGA launches a new generation of all-in-one watercooling kits with its CLX-series. We are talking about a series with three references. Each of them has a screen placed on the top of the pump block !

EVGA also gives in to the temptation to add a small screen on top of its all-in-one watercooling kits. Indeed, the CLX models benefit from a 2.1″ screen displaying a 480 x 480 resolution in color. Of course, the aim is to be able to display information about the system: frequencies, temperatures, etc. But also to personalize its kit with .gif, .jpeg, etc.

Regarding the dimensions, we will retain three models, one in 240 mm, a second in 280 mm and a last in 360 mm. Each of them has an aluminum radiator with a standard thickness of 27 mm, except for the CLX280 which has a 30 mm thick block. 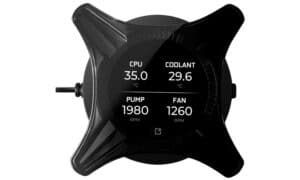 On the pump side, we find a model from Asetek with a 7th generation pump. This one benefits from a copper base, but we don’t know its operating speed. On the other hand, we know that it will be installed on all sockets on the market: Intel LGA-1700/1200/115x and AMD AM5/4 and TR4.

This way to the EVGA datasheets !