We now go to Gigabyte which, as Asus announces a new ITX motherboard. However, we change radically the range with a high-end model equipped with the latest technologies. We are thinking especially of PCIe 5.0 or DDR5 memory. In short, here is the Z690i Aorus Ultra Plus! 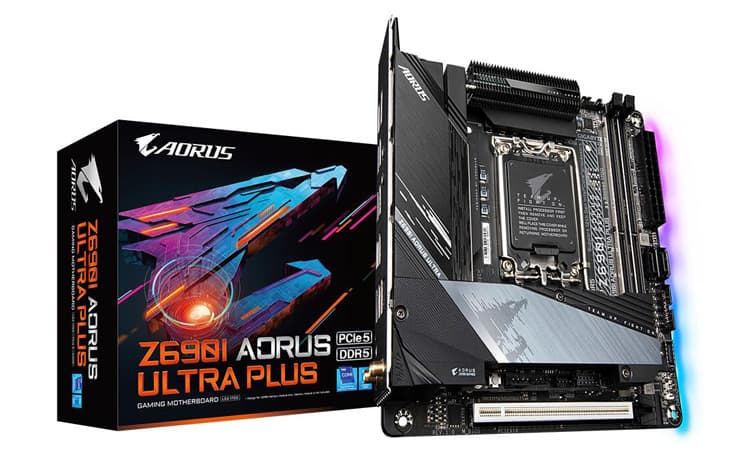 Gigabyte announces the arrival of a new motherboard for Alder Lake CPUs. For this, we find a mini-ITX model equipped with a Z690 Express chipset, enough to start overclocking. Especially since the card has everything you need between its 10 + 1 + 2 power supply phases and its cooling system, which seems to be strong. After that, we’ll have to see how this model behaves in practice.

Otherwise, the card embeds all the latest technologies that came with the 12th generation Core i. One thinks in particular of the DDR5 via two ports (up to 64 GB at 6200 MT/s). The same goes for the PCIe part where we find a PCIe 5.0 x16 slot. Finally, the storage part benefits from two SATA III and two M.2 in PCIe 4.0 x4.

At the back, the connectivity is rather rich with seven USB type A ports of varying standards and a USB type C 3.2 Gen2. On the video output side, we have HDMI and DisplayPort. As for the network, we find an Ethernet managed by a chip in 2.5 Gbps and audio in 7.1 via Realtek ALC4080. Of course WiFi will be possible via two antenna ports.

To get an idea of the price, the “Aorus Ultra non-Plus” model is already trading at ~360 € at LDLC. We imagine that the bill for this model will be higher… To be continued.

This way to the Gigabyte datasheet!