ASRock Rack, the industrial and server branch of ASRock has just announced the arrival of two new motherboards. The brand offers two micro-ATX models with the Z690D4U and W680D4U. The boards are very similar, only the chipset changes from one model to another! 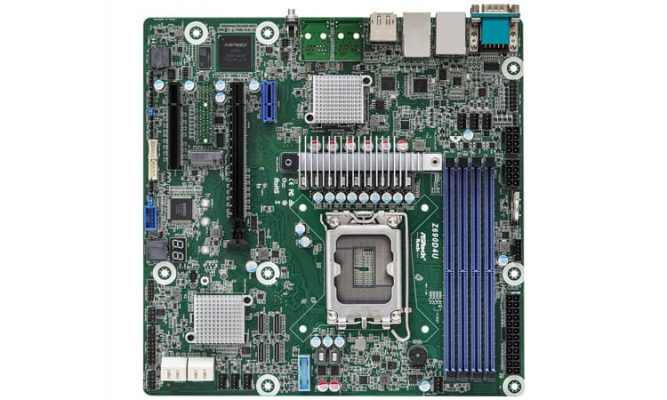 In the program, we find two perfectly identical boards except for one detail! Indeed, the VRM heatsink of the Z690 is slightly wider than the one of the W680… Otherwise, they are the same cards. By the way, the difference in chipset influences the type of RAM supported: non-ECC for the Z690 versus ECC and non-ECC for the W680. Otherwise, the data sheets are identical.

For the time being, both boards feature rather extensive connectivity with four DDR5 memory slots. They will support up to 32 GB of RAM clocked at 4400 MT/s in 1.1V.

For storage, we have four SATA III ports present that can be supplemented with four additional ports via one of the OCuLink connected to the chipset. Finally, there is an M.2 2280 (Key M) slot in PCIe 3.0 x4.

At the back, we have a rather basic connectivity with a serial port and a VGA output (via ASPEED AST2600). Two USB 3.2 Gen1 are also present as well as three network interfaces: two in Intel i210, one dedicated to IPMI functions via a Realtek RTL8211F chip.

For the moment, no price.

Here and there are the technical data sheets of ASRock Rack!