This is a first feedback made by some users with copies of the new Ryzen 7000 and compatible motherboards: the first boot will seem long. Even abnormally long (sometimes up to 6 minutes!) but this is normal. This information is confirmed by a picture of a sticker on the ASRock X670E Steel Legend motherboard PCB warning of long delays at first boot. However, it is important to take into account that we have not seen this with our sources. So real “constraint” or Bios still in finalization…We’ll see. 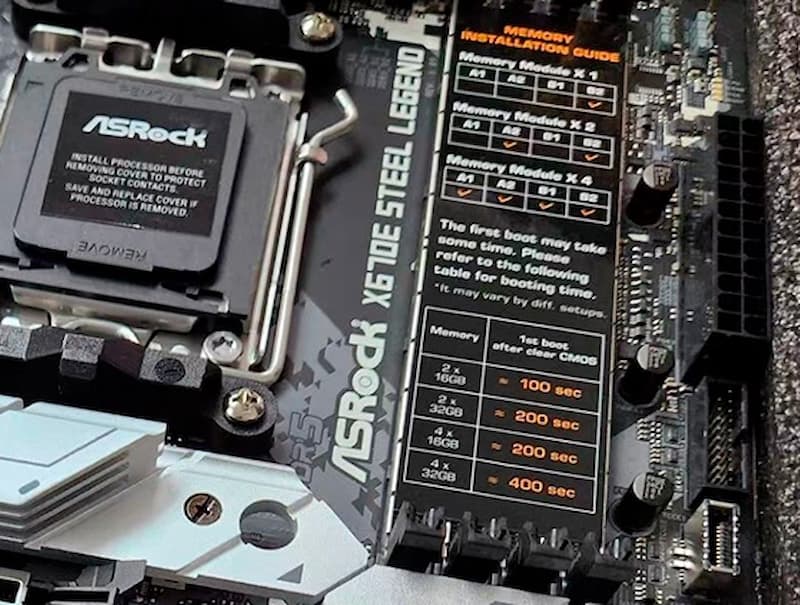 Because nothing officially explains this waiting time but it could be linked to the optimization of the bios in relation to your ram and cooling configuration. By the way, you will notice that the sticker indicates that this waiting time varies considerably depending on your memory configuration. It is difficult to say at the moment that all motherboard manufacturers will be subject to this process, which should undoubtedly allow automatic settings to be optimized according to your configuration.

The memory configuration is a subject, but it will also be necessary to consider an optimal setting of your cooling. Indeed, the first feedbacks also mention high temperatures on the Ryzen 7000 and this despite the presence of a 360mm AIO.

This is a parameter that we mentioned early on, despite the 5nm transition of this CPU generation, and which will obviously require additional attention (and budget).

Update the source who shared this initial feedback confirms that with the latest bios update, boot time is significantly reduced.