NVIDIA would have postponed the launch of its next generation flagship product, the RTX 4090, to September or maybe even October in order to avoid the discontent of brands and distributors. Indeed, a launch during this summer could encumber a little more the distributors whose stock of RTX 30 has been struggling to leave for several weeks. Because despite a regular price drop, allowing even some references to be found at launch prices, the market remains sluggish. The information going in this direction is multiplying these last hours. Under these conditions, the arrival of the RTX 4090 is postponed to make room in stocks. 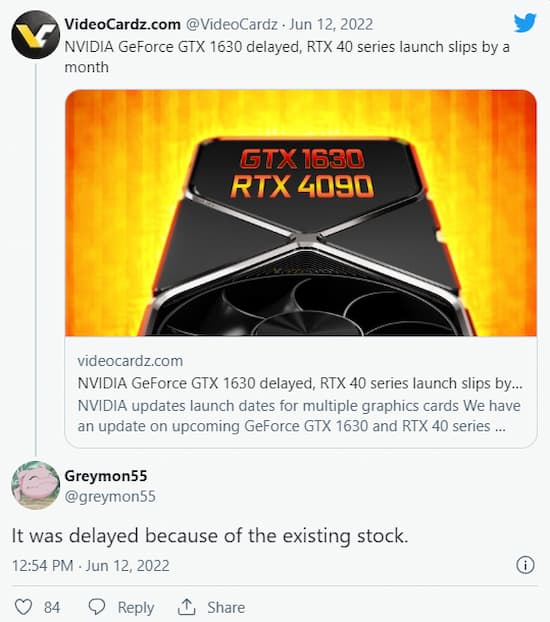 At the same time, the “fast” arrival of the RTX 4090 was beginning to make customers who had switched to the RTX 3090Ti launched very recently bitter. So we have a cascading effect on the launch dates since, in addition to the RTX 4090/4080, the GTX 1630 has also been delayed .All sources indicate a September or October launch for the RTX 4090, followed by the RTX 4080 in November and the RTX 4070 in December.

Finally, while there is some consensus on this latest info among several sources, another pricing indiscretion has emerged in recent hours. Given the normalization of the graphics card market and the generalized inflation that affects all countries, Nvidia would consider launching its new RTX 40s with the same price positioning as the previous RTX 30 line. With the launch of AMD and Intel CPUs, the end of 2022 is likely to be particularly busy.