The series of all-in-one water cooling kits for GPUs from Alphacool, the Eiswolf 2, is completed with a new version. Today, we learn that the brand launches a version for the RTX 3090 Ti Founders Edition from NVIDIA! 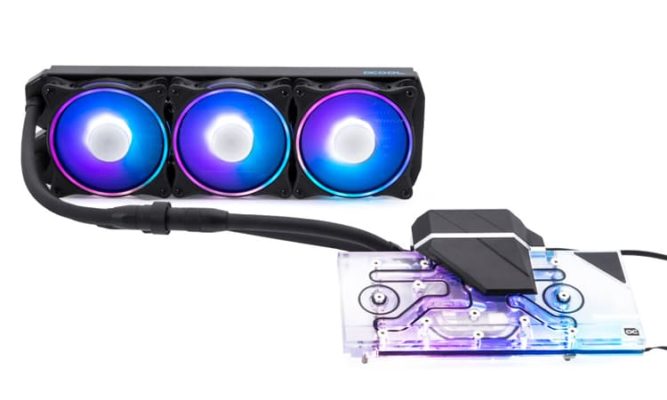 In itself, it is a bit late that Alphacool decides to launch its AIO. However, as the saying goes: “better late than never”… Hopefully it is not too late. Anyway, the recipe does not change since this kit is actually composed of parts available in retail, but assembled as an all-in-one kit. That’s why we find a NexXxos 360mm copper radiator and a DC-LT2 pump at the water block. Moreover, the water block is a full cover type, it will cover the entire card. Its role will be to cool the sensitive parts of the card such as the VRM, the GPU or the memory chips. Finally, as far as the ventilation is concerned, we have the right to three Aurora Rise mills in 120 mm. The characteristics are of course known since these operate from 0 RPM to 2500 RPM. At full speed, the air flow rises to 119.8 m3 / h and the static pressure reaches 3.17 mmH2O. For the price, beware, it stings since we are almost 300 €, 269.98 € precisely.

This way to theAlphacool datasheet!