Our colleagues from Videocardz had access to a part of the next motherboards range of the ASRock brand. These next ASRock motherboards will be based on the Z790 chipset but also on the H770 chipset. As far as the socket is concerned, we will still be on the LGA-1700 socket in order to accommodate this new generation of Raptor Lake processors. As a reminder, these new processors and therefore the appropriate motherboards are expected for the fourth quarter of 2022. 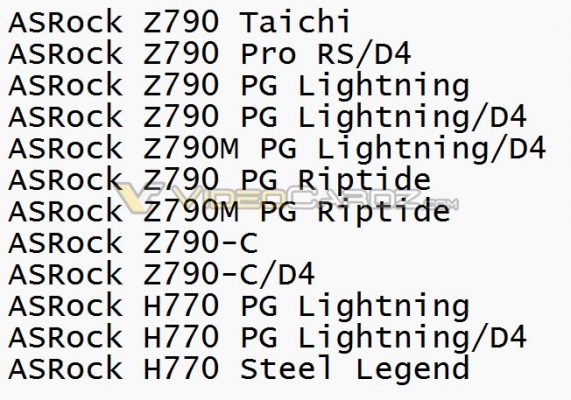 But let’s get back to the ASRock motherboards. In total, no less than 17 models will be offered. Indeed, as for Alder Lake, the manufacturers will offer motherboards compatible with DDR5 but also with DDR4. Both types of memory will still exist, even if the high-end models will only be equipped with DDR5. The list of cards may not be complete yet. ASRock also unveils models based on the H770 chipset, which will be the mid-range version with PG Lightning and Steel Legend models. It remains to be seen if this chipset will also be available at the launch of Raptor Lake. As a reminder, for Alder Lake, the mid-range chipset, the B660, arrived a few weeks after the Z690.