Day after day, we get new details about the next AM5 motherboards. Indeed, ASRock has just put online the page of its next motherboard X670E Pro RS. However, not many big changes compared to what we learned during the Computex presentation. We are mostly entitled to three visuals of the future board, including a preview of the I/O connectors.

On the first image, we can see that the M.2 WiFi card slot is occupied by a card. The card itself is connected to the two antennas on the back of the motherboard.

The card seems to have a single M.2 slot ” Blazing”, probably echoing blazing fast . Indeed, this one should accommodate the future PCIe 5.0 SSDs. We can also notice three other M.2 slots, which will be PCIe 4.0 standard. Two of these slots will share a heatsink while the last one will be without one. Finally we find one last M.2 slot, which will be limited to PCIe 3.0. As this is an X670E card, the PCIe x16 slot, which will house the graphics card, will of course be PCIe 5.0.

Other features include the Realtek Dragon 2.5 Gbps Ethernet controller that will have a dedicated gaming software suite. From the photos, it looks like ASRock decided to keep the audio inputs and outputs to a minimum, with only a line out, a mic input and an optical S/PDIF. All this is connected to the Realtek ALC897 audio codec. 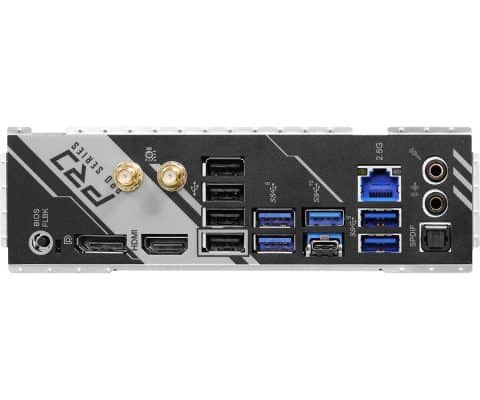 The card also has a single USB-C port on the back, however, it is a USB 3.2 Gen 2×2 (20 Gbps) port. In addition, we can observe a total of five USB-A 3.2 ports. One is capable of reaching speeds of 10 Gbps, and the other 5 Gbps. We also find four USB 2.0 ports, but also a DP and HDMI port. Finally, we note the presence of a Flashback BIOS update button. Other expansion options include an internal USB-C connector and two PCIe x1 slots. We also have six SATA ports and two USB 3.x connectors. This board should be one of the most affordable X670E motherboards in the upcoming AM5 platform. Via ASRock