FidelityFX Super Resolution 2.0 ( AKA FSR 2.0 ) is the second evolution of AMD to offer a game scaling technology to compete with Nvidia’s DLSS. In both cases, FSR as well as DLSS are a video rendering technique that seeks to increase frame rates by rendering images at a lower resolution than displayed. So is there a FSR 2.0 vs DLSS match?

FSR 2.0 VS DLSS: the real differences

The fundamental difference with Nvidia technology is simply that FSR 2.0 is hardware agnostic…It does not depend on hardware 😉 . Where Nvidia technology requires an RTX graphics card to accelerate deep learning in order to scale the images as well as possible so that they are as sharp as expected at the native resolution; AMD doesn’t care about the model of your card and even more about its brand. This means that you can get an improvement in the resolution of your game with a Vega64 as well as a GTX 1060 or an RTX 3080! And that’s the whole point for AMD. First of all, like Freesync, the reds are trying to push a free and open technology to press where it hurts in contrast with G-Sync and DLSS at Nvidia. But we should not forget that the greens were the first to inject this scaling technology and it was a key selling point for the RTX GPUs. 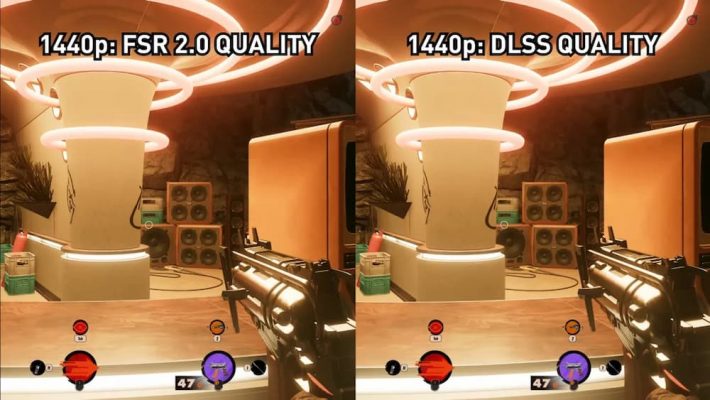 Froma technology standpoint, as we saw above, DLSS takes a closed-source AI-based approach, which requires specific proprietary instructions capable of being processed and accelerated by Nvidia’s Tensor-based hardware ( thus an RTX). AMD’s FSR 2.0 dispenses with AI altogether, but instead uses a hand-tuned algorithm that is open-source and supports a wide range of hardware, both the latest RTXs and cards older than 5 years.

What about the results?

The first opportunity to evaluate FSR 2.0 came with Deathloop, a game that also supports FSR 1.0 and DLSS. It is regularly cited, including by Nvidia, as one of the best examples of DLSS technology producing a “better than native” image. Our brethren at Techspot ran a series of tests on a Ryzen 9 5950X test system equipped with 16GB of low latency DDR4-3200 memory. The video cards used were all equipped with the latest drivers.

In all situations, the use of FSR 2.0 improved the performance. Obviously, the pure power of your GPU will determine the result. Cards like the RX 570 and GTX 1650 Super simply take longer to process FSR 2.0, resulting in more limited performance improvements. But even for these “old” cards, we can expect a performance improvement of 10-20%. For Nvidia RTX cards, FSR 2.0 performance is close to DLSS using equivalent quality parameters. However, it is found that DLSS generally performs better (up to 12%, which is the best difference found with an RTX 2080). So it is clear that Nvidia RTX GPU owners are well advised to continue using DLSS, for the small performance advantage and also because in some situations it also offers better image quality. 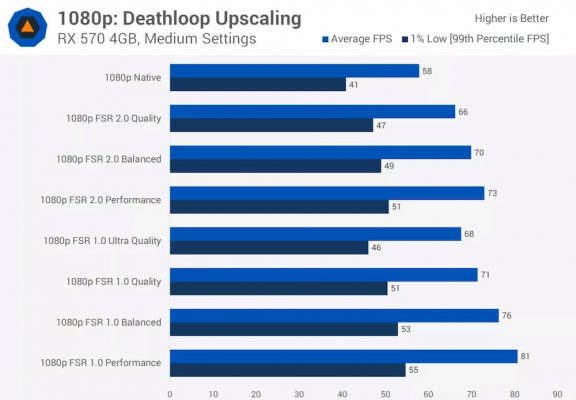 Of course, the results that lead to this conclusion are from a single game. It will therefore be necessary to increase the spectrum of tests. But the work done by Techspot allows us to conclude that AMD is now on the same level as Nvidia on this technology. That the reds are offering a “free” hand to owners of cards that were previously unable to run DLSS…And that’s still to be commended.