While AMD took advantage of Computex to release some ( weak ? ) official information about its future Ryzen 7000 with a frequency that can go up to 5.5Ghz in games, the communication war continues with Intel and especially a leak on the frequency of an i9-13900… 1usmus has also revealed some information on the operating frequency of the future 13900 (not K) from Intel. He claims that the latter will be able to reach a Turbo frequency of 5.45 GHz, hoping that several cores can operate at 5.20 GHz and that all the cores in unison reach 5.00GHz. 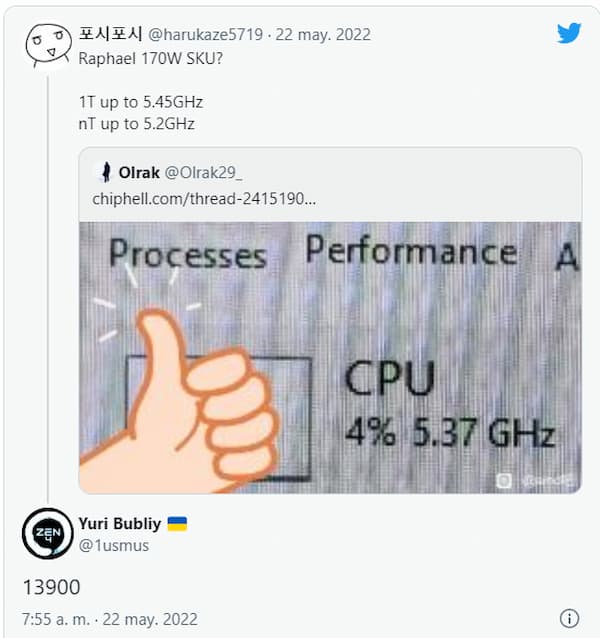 It should be remembered that rumors have previously indicated that the next top-of-the-line Raptor Lake, the Core i9-13900K , could reach5.80GHz . These rumors claiming that each Raptor Cove core will be 300 MHz faster than the previous version.

Of course, at Intel as well as AMD, the taboo subject for the moment remains the power consumption. With such frequencies, a 13900K could tease 300W compared to the current 260W of the Core i9-12900KS. Concerning the Ryzen 7000, it is regularly mentioned that AMD would pass the 170W mark. Raptor Lake will therefore be in front of the Ryzen 7000 with potentially a significant increase in frequency. But a multi-core performance improvement of up to 40% is also expected. As for the IPC, it is said that the improvement of high performance cores (P-Core) could go up to 15%… Amazing, the same figure as the one communicated by AMD 😉