Covid, logistical bottlenecks and now energy problems are having a heavy impact on all products manufactured in China. If there is one sector that has relied more than any other on China as the world’s workshop, it is “technological” products. Today, from PC components to TV sets, a major reversal is taking place. The explosion in production and transport costs is profoundly challenging the Chinese subcontracting model. The latest example: according to data from the National Bureau of Statistics (NBS), production costs in China are at their highest level in a quarter of a century. 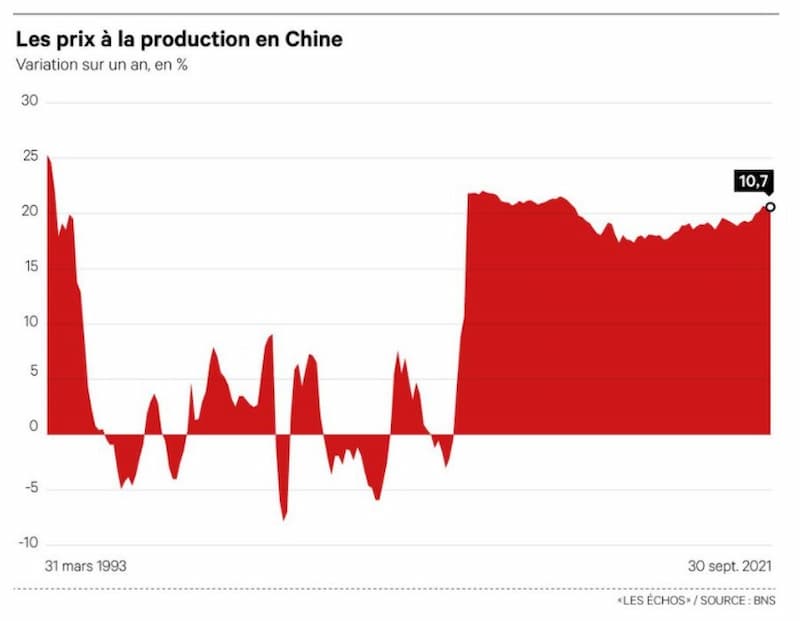 In addition to this situation, there are problems related to logistics and the explosion in the cost of transport from China. The consequence of this phenomenon is very cyclical. The changes in consumption and purchasing habits that occurred with the pandemic, particularly the rise of e-commerce, have led to an increase in the demand for imports of manufactured consumer goods, a large part of which is transported by container ship. Infrastructure delays are mounting.

For a number of reasons, China’s power generation is under severe strain. This is one of the reasons for the recent mining operations but not the only one. Energy prices are highly regulated in China. The increase in demand for electricity requires a massive recourse to coal-fired power plants… which itself is rising sharply. Under these conditions, operators who can only adjust electricity prices to a limited extent, produce at a loss and/or simply cut off the supply.

It is in this context that Les Echos informs us that the Chinese authorities have announced, on Thursday, to authorize an exceptional increase in electricity prices to allow producers to recover their costs. An increase limited to 20%, while traditionally, this price can not fluctuate more than 10%. Finally, in order to facilitate the supply of coal and to moderate the costs of transporting it to the power plants, the State has decided to increase the logistical capacity of the Suifenhe railway junction, which allows Russian coal to enter China. As for Russia, since October, Beijing has been importing Russian electricity on a massive scale, with the volume delivered tripling in a few weeks.

What future, what alternatives?

All product families are impacted. But clearly, products with low technological values are a problem, as well as motherboard assemblies that are almost entirely robotized. Once again, we will take the case of PC cases or power supplies, which are hit hard by the increase in production costs and logistics. But should the assembly of motherboards (for example), a highly robotized activity, necessarily be located in China in view of these events? Some industries seem to be protected from power cuts for the moment, but the increase in the price of electricity will also have an impact on boards and other assemblies made in China. A few months ago, some people had treated with irony the efforts of Russia to produce some products like motherboards on its territory… In 2019 the Trump administration had started the movement. Other countries seem to be arming themselves to propose alternatives to China, such as Vietnam or Turkey closer to us. But it will probably take a few years before a turnaround occurs. In the meantime, we must get used to the high prices.