We go back to ASRock to talk about a motherboard… Again. However, this time, we are interested in a model for AMD CPU. Indeed, the brand announces its B550M PG Riptide, a micro-ATX model. Honestly, we could see it in the TD300 from Cooler Master! 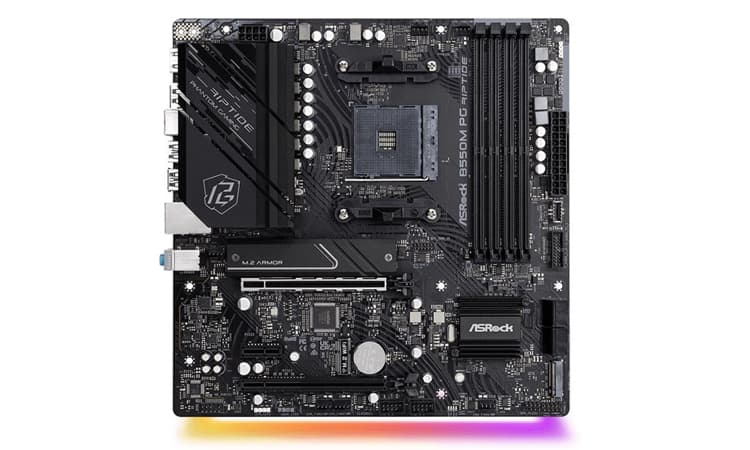 With its new card, ASRock offers us a model with a B550 chipset, all in micro-ATX format. From a visual point of view, it is rather discreet with mostly black colors and an RGB border at the bottom.

In short, what interests us most are the technical characteristics of this reference. As you can see, it has four DDR4 memory slots. It will take up to 128 GB of RAM at 4733 MHz.

The storage part has four SATA III 6 Gb and two M.2. Once again, you have to be careful when buying your SSD. Indeed, the first one (with heatsink) will be in PCIe 4.0 x4 and the second one will run in x2 in PCIe 3.0.

Finally, concerning the CPU power supply, there are a total of 8 power supply phases with 50A Dr. Mos and 60A inductors. On the other hand, the board only offers a single 8-pin EPS12V.

The rear connectors feature HDMI and DisplayPort outputs. A PS2 combo (keyboard/mouse) is present, as are the seven USB type A ports (mixing 3.2 Gen2 and Gen1 and 2.0). The network part is managed by a Dragon RTL8125BG chip and the audio benefits from a Realtek ALC897 chip in 7.1. Finally, we have two WiFi antenna ports that will be added via an M.2 module.

This way to the ASRock datasheet!