AMD announced a few days ago during its presentation at CES the future RX 6500 XT. This card should be located in entry-level below the RX 6600 with an availability scheduled for January 19, 2022. Today it’s ASUS’ turn to unveil two variations of the RX 6500 XT. 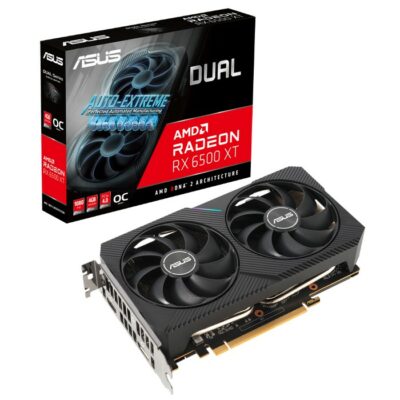 This model joins the ASUS DUAL family with the same dual-fan design as its bigger sisters. It also benefits from a semi-passive technology that allows the fan not to turn when the card is at a low temperature. There is still a small touch of RGB on the front, as well as an aluminum backplate. With a power consumption of 85 W slightly lower than the 107 W announced by AMD, it still requires a 6-pin connector to power it. 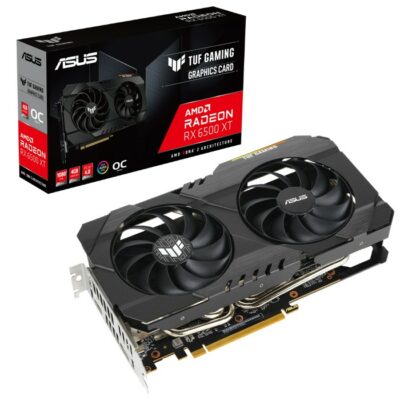 This time we find a model from the TUF range, which also has the same design as its big sisters. Like the DUAL, it is a dual-fan model, but with a footprint of 2.7 slots compared to 2 slots. The card has a dual BIOS giving access to a quieter mode. There is a touch of RGB on its edge with the TUF logo and a small line. The model also has an aluminum backplate. With a power consumption of 5 W more than the DUAL, it is still lower than that announced by AMD and still requires an additional 6-pin connector to power it. ASUS also announces slightly higher frequencies for this model, without giving any figures. Both models have only two video outputs, an HDMI 2.1 and a DisplayPort 1.4a. Regarding prices, ASUS Germany has indicated a recommended retail price of €299 for the DUAL and €334 for the TUF. This is far from the $199 announced by AMD, but it gives us an indication of the real prices.