Despite a relative sluggishness (compared to the last years) on our PC market against Intel, AMD signs a record first quarter with a turnover of 5.9 billion dollars. This announcement made during the regular update with investors also allowed us to understand how the company has navigated through the crisis. 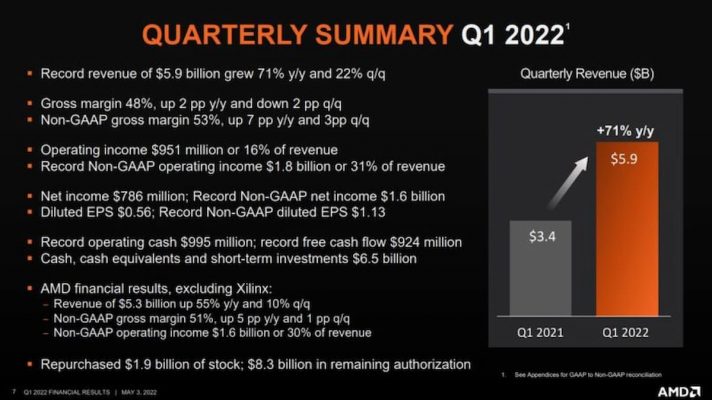 Until now, AMD’s growth has been based almost entirely on home computing with its CPUs and GPUs. But in recent years, the company has gained an increasingly strong position in the enterprise segment as well. It is worth noting that these figures include for the first time the consolidation of the business of Xilinx, which was acquired by AMD and whose purpose is to strengthen the company’s portfolio in high-performance computing. During this first quarter, AMD has thus achieved a turnover of 2.5 billion dollars on its enterprise / high performance computing part. This brings us back to a strong annual growth of 88%. At the same time, AMD’s computing and graphics segment recorded sales of $2.8 billion, which is another record. It should be taken into account, however, that this growth seems to be largely the result of higher prices on the CPU and GPU families.

AMD’s forecasts for the second quarter are also very enthusiastic, again with the enterprise sector as the main focus. The arrival of Zen 4 was also cited as a very positive factor for AMD’s 2022 numbers. Finally, we also learned that AMD targeted another acquisition, the company Pensando, for $ 1.9 billion, again in the enterprise and networking perimeter. You can find a detailed review of AMD’s results here.