We talked about the Ryzen 7000 a while ago, which should have 3 “families”: Raphael for desktop PCs, Dragon for “high performance” laptops and Phoenix for laptops with a thinner chassis. The AMD Phoenix family will be a range of APUs composed of a Zen 4 CPU and a RDNA3 graphics part. 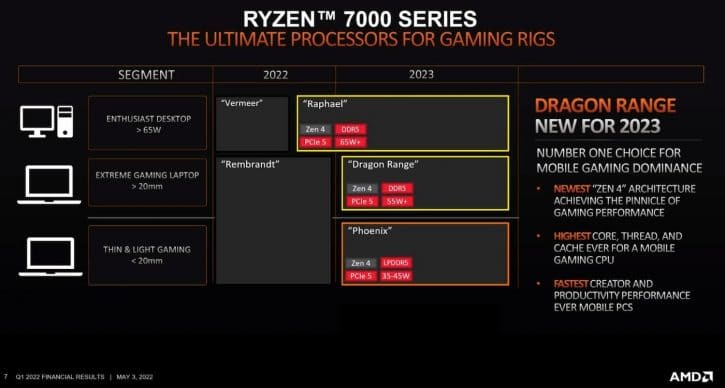 The Phoenix APUs will operate in the power consumption range between 35 and 45 W. Nevertheless, according to Greymon55, the graphics part of the AMD Phoenix APU could show performances comparable in power to the mobile 60W version of the RTX 3060. Obviously, gamers will make a face, but having such interesting graphics power in the heart of an APU is a real leap forward. The AMD Phoenix APUs will also use the 5nm process and other optimizations that could potentially make the iGPU clock even higher. Indeed, it is quite possible that, as for the RTX 3060 MaxQ, depending on the chassis of the laptop and the desire of the user (use on mains or autonomy), a kind of “Dynamic Boost” could be activated. This would obviously result in higher power consumption but could also improve performance. But for the moment we remain on a rumor that many of our other sources relativize today. So we’ll have to wait and see. If the Ryzen range is expected for the end of the year with the desktop version (Raphael), we will have to wait until early 2023 for the two series dedicated to laptops.