It is obviously very timely that AMD has communicated yesterday on an event that will take place on November 3 to unveil RDNA3. For the moment we know that we will have technical and commercial details on the Radeon RX 7000 range during this event. But there is no indication that AMD will be ready to release the cards on the same date, which is a bad situation for year-end sales. Most rumors suggest that AMD will launch the top-of-the-line RDNA 3 first, the Radeon RX 7900, based on the Navi 31 GPU. The Navi 33 and Navi 32 GPUs will follow. A strategy modelled on what we have just experienced with Nvidia and its RTX 4090 (scheduled for October 12) followed by the RTX 4080 16GB and 12GB in November.

After Nvidia, the next Radeon 7000 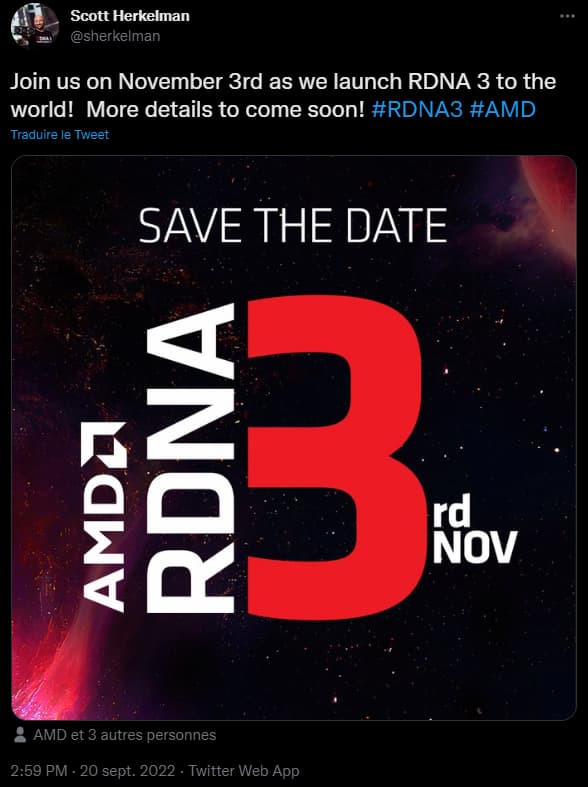 For the moment, we have to admit that we don’t know much about RDNA 3. This generation uses the 5 nm of TSMC and will rely on the MCM contrary to what Nvidia does. A solution that made the success of Ryzen. The energy efficiency of these new chips is praised by AMD. But beware, this does not mean that the cards will necessarily consume less. In fact, it should be understood that their performance will increase faster than their consumption…Keep this nuance in mind.

The Radeon 7000 series will also support AV1 encoding and decoding. This competitive advantage could have benefited the Arc Intel GPUs which were the first to include AV1 encoding, but we are still waiting to see the color ( and price ) at our retailers. The support of DisplayPort 2.0 and its bandwidth of 80 Gbit/s will allow RDNA 3 cards to push video streams up to 240 Hz at 4K.

Of course, we still need to know more about the performance , as rumors have been flying in recent weeks. The question of price will be particularly sensitive given Nvidia’s announcements.