If we look back at the past years and the notable evolutions of our hardware, the speed at which the size of the panels has progressed does not immediately come to mind…And yet, who would have said that in 2022, a 55″ gaming monitor would have been “accessible”? Samsung has indeed just announced the global launch of the Odyssey Ark, the newest and highest-end model in the Korean company’s Odyssey gaming monitor series. According to the company, the Odyssey Ark is the world’s first 55-inch 1000R Mini LED curved gaming display that features a 165Hz refresh rate and a 1 millisecond response time (1ms GtG) at 4K resolution. So obviously, even if this product is aimed at the general public, its launch price hurts: 3500€!

Samsung Odyssey ARC: 55″ is too much?

It’s hard not to confuse this monitor with a TV. It obviously has everything necessary to replace the latter just in case. The rest of its technical data sheet leaves you dreaming: First of all, the Quantum Mini LED panel with 1056 backlight zones has the same curvature as the human eye in a 55-inch size. Then it offers a contrast of 1,000,000:1. Its Quantum HDR 2000 technology promises a maximum brightness of 2,000 nits and 16,384 black levels. To complement this data, the matte panel is backed by a Neural Quantum Ultra processor ensuring upscaling of older games to 4K. The monitor also features AMD FreeSync Premium Pro image synchronization technology and thus also provides access to Nvidia Gsync 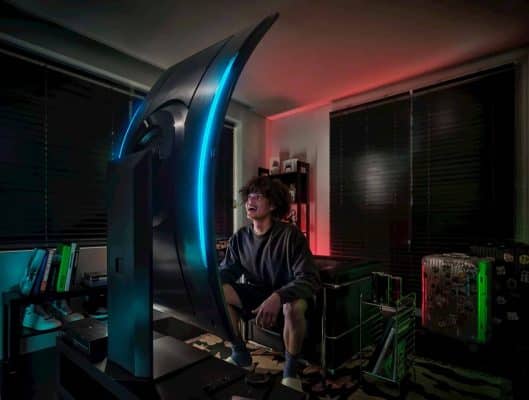 The other attraction of this monitor is its “cockpit mode” allowing you to split the big 55″ slab by rotating the screen. So you could have either 3 monitors 27″ or 4 monitors 22,5″ horizontally. You will also have 4x HDMI 2.1 to power your 4 virtual 22,5″ monitors if you wish. On top of that, you’ll be able to get rid of the PC or console since Samsung offers you the possibility to natively access Xbox Game Pass, NVIDIA GeForce Now, Google Stadia, Utomik and Amazon Luna streaming services. Obviously, if you work from home in a 20m2 space, this screen will not be for you (although…) https://youtu.be/U7yiPyXRC4A [gp_product_box ean=”8806094408072″]