DeepCool officially announces the arrival of two new ” Premium ” all-in-one watercooling kits. On the program, we find the LT Series, kits available in 360 mm or 240 mm. They are distinguished by the presence of a pump block with many lighting zones with infinite depth effect! 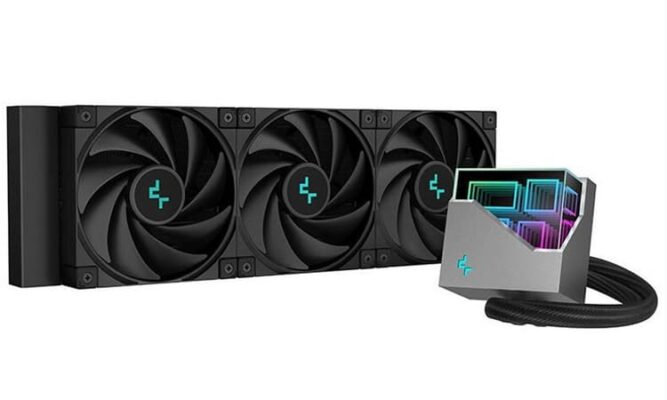 For the moment, we find the AIO LT720 and LT520, kits with a 360 mm and 240 mm radiator respectively! Nevertheless, they are distinguished by the presence of a pump block nicely worked. The latter has several areas illuminated by RGB with infinite depth effect. Otherwise, we find a gray ring with the logo of the brand.

The radiator displays a construction that seems neat. Nevertheless, the basic material remains aluminum and the thickness remains standard: 27 mm.

On the ventilation side, we find two or three fans in 120 mm. The latter benefit from a PWM power supply and will operate from 500 rpm to 2250 rpm. At full speed, it will blow quite hard. The static pressure will then reach 3.27 mmH2O and the airflow will rise to 85.85 CFM!

The compatibility of sockets is exemplary, since we find a compatibility sTRX4/sTR4, but also AM4 and AM5 in AMD. On the Intel side, the list is just as complete with LGA-2000 and more mainstream platforms based on LGA-1700, LGA-1200 and LGA-115x.

Here and there the technical data sheets of DeepCool!