Biostar announces a new AM5 motherboard with its X670E Valkyrie. It is a reference with a neat look intended to host the AMD Ryzen 7000 CPU series and DDR5 memory. 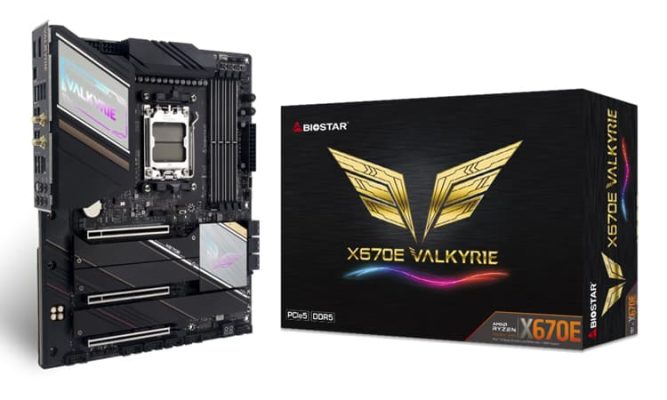 With this new motherboard, we find a model in ATX format. It is also equipped with an AM5 socket and an X670E chipset. On the power supply side, we find a total of 22 phases, 18 of which are allocated to the CPU. These have Dr.MOS in 60A.

The connectivity offers four DDR5 memory slots. They will be able to hold up to 128 GB of memory clocked at 6000 MT/s. The PCIe part features two x16 (or x8) slots in the 5.0 standard for graphics cards. They are completed by a last 4.0 slot working in x4.

Concerning the storage, four M.2 are present, two of which are PCIe 5 .0 compatible. The last two will work in PCIe 4.0 and of course, they all benefit from a dedicated heatsink! Finally, six SATA connectors close the deal.

We finish with the rear connectivity which focuses on an audio part in Realtek ALC1220. The network part is driven by an Intel i225 chip. Finally, we will have the right to video outputs in DisplayPort and HDMI. The USB part is very well supplied with nine type A ports to the 3.2 Gen2 standard and a type C 3.2 Gen2.

Finally, we find a SPDIF and a bios update button! For the moment, no price is known unfortunately.

This way to the Biostar datasheet!