Our first series of tests will be dedicated to synthetic benchmarks. These are often used for overclocking competitions but are also very interesting to compare different GPUs. We will therefore focus on benchmarks from the 3DMark series. We will test the following benchmarks:

Let’s start with 3DMark Fire Strike, which is one of the most used benchmarks today. It consists of two graphics tests, a CPU test and a fourth test that combines GPU and CPU. Don’t forget to deactivate the demo which doesn’t add anything to the final score and prolongs the benchmark (unnecessarily). The version used for these tests is of course the latest one. 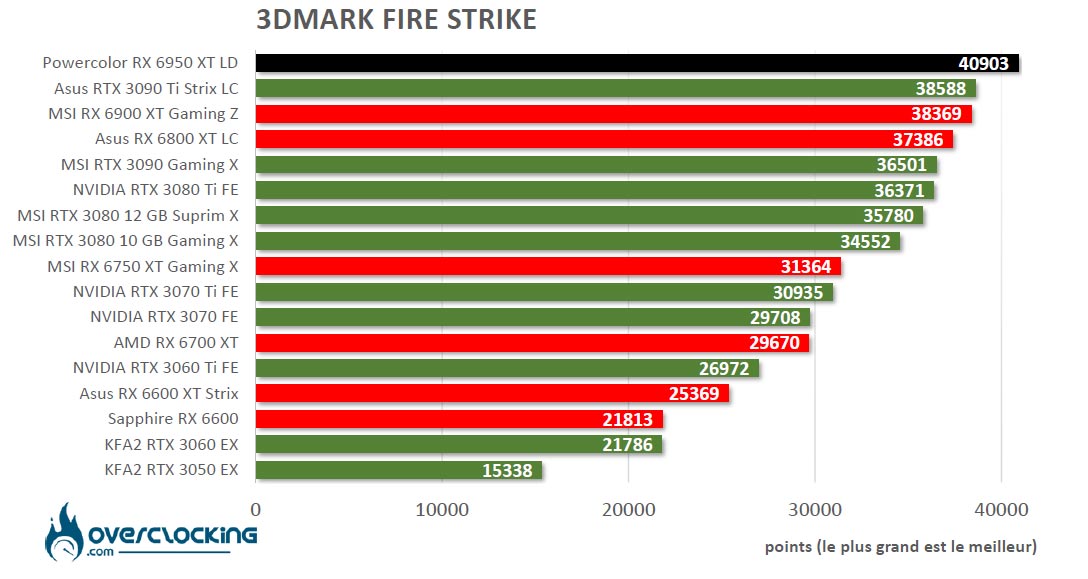 The first benchmark that we carry out with this RX 6950 XT and I remind you, the “Unleash” BIOS. Well, right from the start, it hits very hard with a score that passes the 40K mark with the very nice score of 40903 points. It is quite simply the best performing card we have ever had in our hands ! 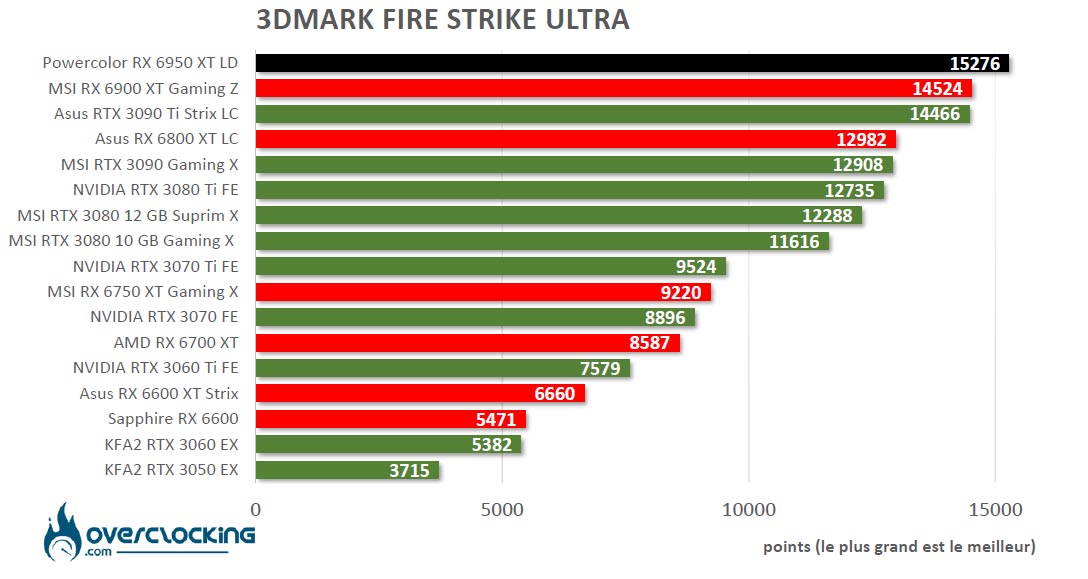 The same applies to Fire Strike Ultra with a score of 15276 points, leading the MSI RX 6900 XT Gaming Z with its XTXH chip by 752 points. This new refresh undoubtedly dominates the 3DMark Fire Strike benchmarks.

The second test is 3DMark Time Spy. Although this one is done in 1440p, it is special because it uses DirectX 12. It consists of two graphics tests and a CPU test. As with Fire Strike, don’t forget to disable the demo. These first two benchmarks are provided by UL Benchmark. 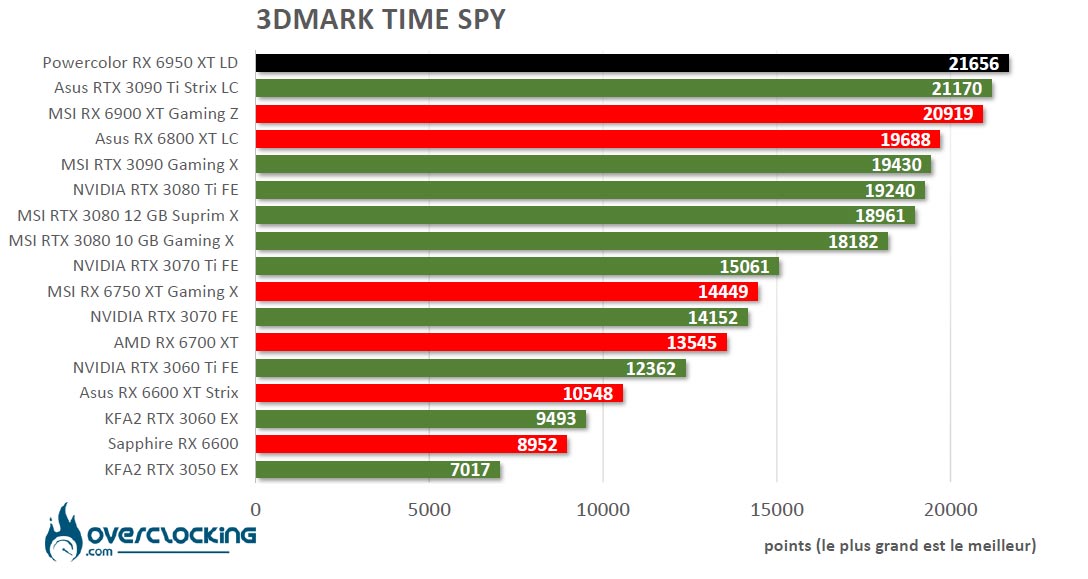 The performance obtained in Time Spy is always fairly representative of what we will get in games. Here we can see that the RX 6950 XT once again takes the top spot. 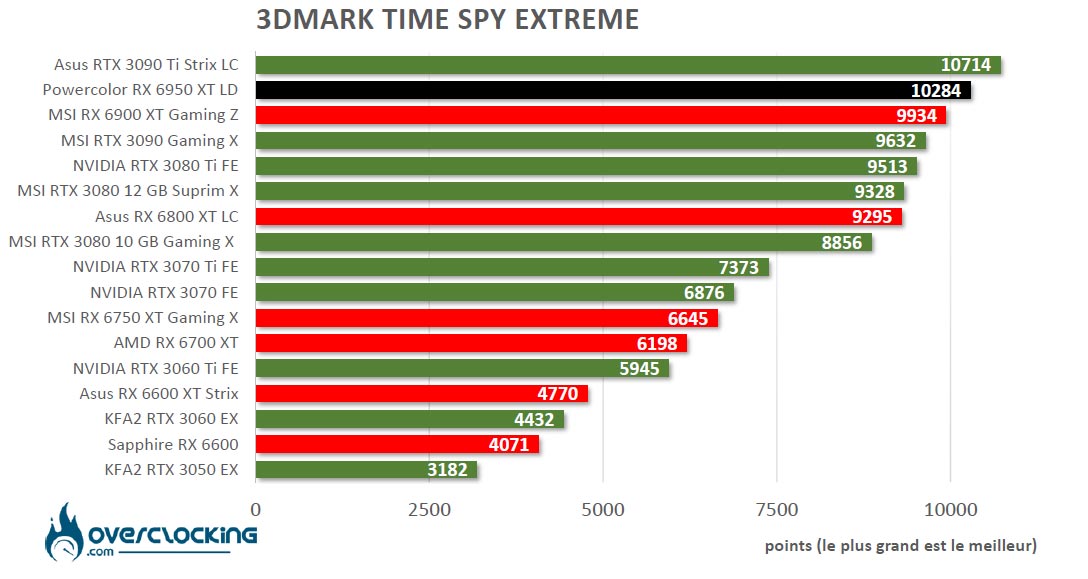 Under 3DMark Time Spy Extreme, our sample of the day moves down a step to take second place in this ranking, a few hundred points behind NVIDIA’s RTX 3090 Ti.

UL Benchmarks has added a new test to its series of benchmarks to measure Ray Tracing performance. The idea will be to use the 3DMark DirectX Raytracing test to compare the performance of dedicated Ray Tracing hardware to graphics cards from AMD and NVIDIA. The 3DMark DirectX Raytracing test is designed to make Ray Tracing the limiting factor. Instead of relying on traditional rendering, the entire scene is traced and drawn in a single pass. The test result will depend entirely on Ray Tracing performance. This makes it easy to measure and compare the performance between different cards. 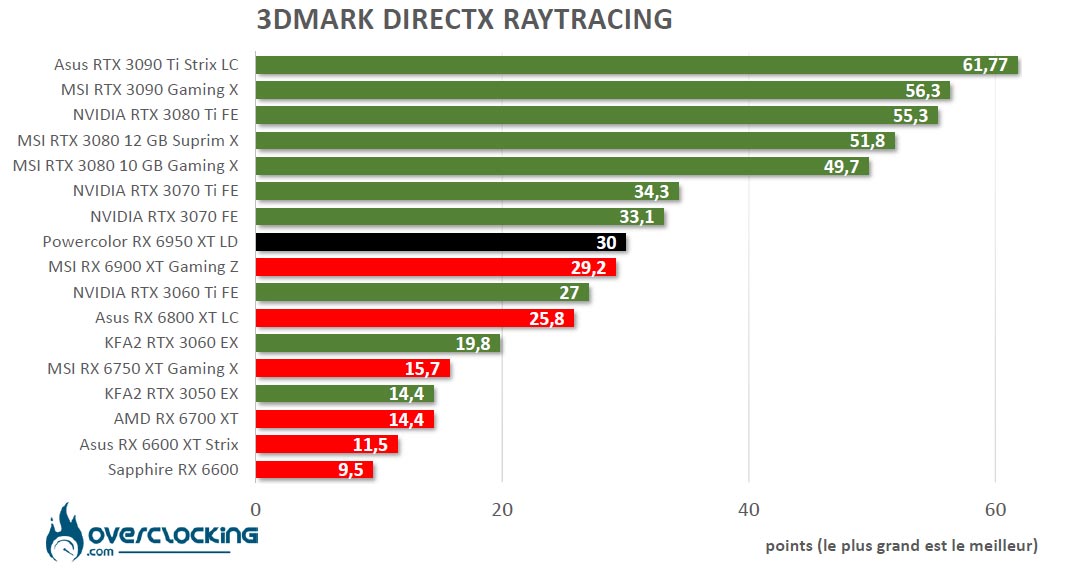 The advantage of Ray Tracing is always for the greens, with our RX 6950 XT scoring 30 points, well behind the best NVIDIA GPUs.

Here is the new test we added to the synthetic benchmarks: Mesh Shader. We added it because it is supported by AMD’s RDNA 2 architecture and therefore our RX 6000. It allows us to analyse the level of performance of the GPUs concerning this functionality. As a reminder, it allows to exploit more complex calculations at the geometry level, in a more flexible way, for each meshlet. The result displayed is the one with the Mesh Shaders active. 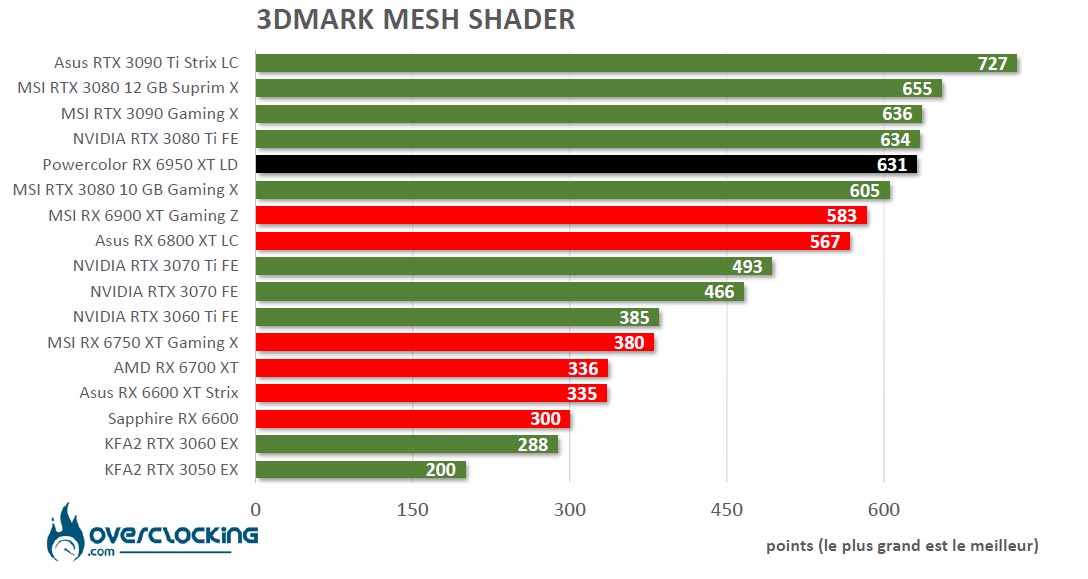 The score under 3DMark Mesh Shader improves again and now rivals the RTX 3080 Ti and especially the RTX 3090. This concludes this first series of benchmarks, which suggests excellent performance for the future.