This AORUS X670E Xtreme is built around the new X670E chipset. At the moment, we know that AMD is planning to launch several “new” chipsets in the coming weeks. In addition to this X670E chipset, we will also see X670, B650E and B650 motherboards land, and by the end of October all four of these chipsets should be available to the general public. Here is a table that highlights the differences between these four chipsets. The B650E chipset could also be very interesting to build a configuration with a Ryzen 7000. 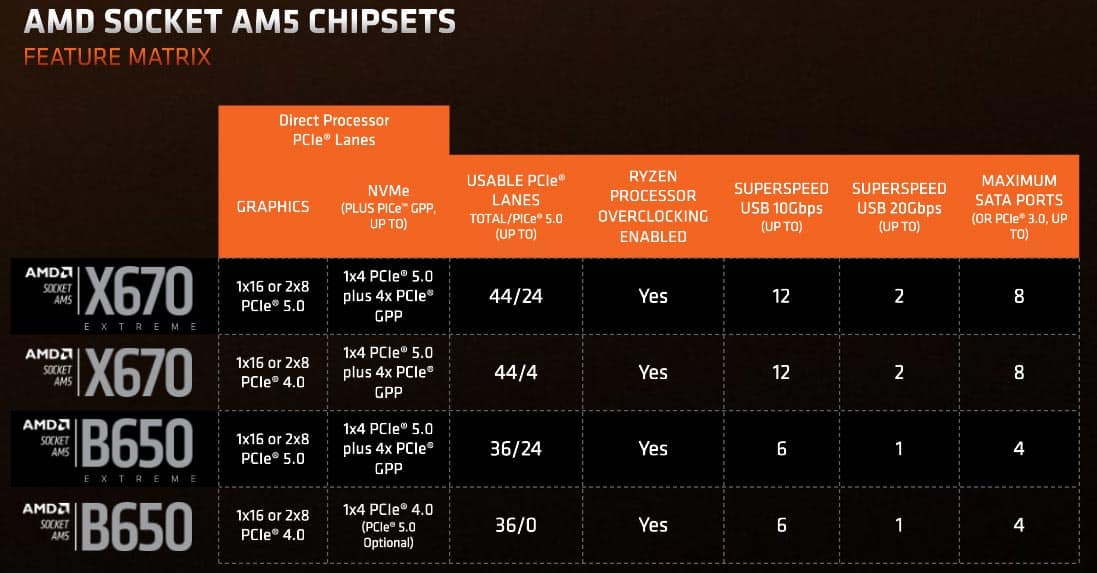 A little tour through the bundle of this AORUS X670E Xtreme to see if it benefits from “special items”. Overall, we find a pretty standard bundle with the traditional SATA cables, Wi-Fi antenna, stickers, motherboard manual, etc.

We note the presence of a USB DAC. It is an adapter that processes the digital signal to analog via a USB Type-C port. Apart from that, nothing special to report.

A new socket, hello socket AM5:

After the Z690 chipset and the LGA-1700 socket, it’s AMD’s turn to make its revolution. Goodbye socket AM4, hello socket AM5. It’s time to forget the PGA socket(Pin Grid Array) in which you used to put your processor in order to welcome the LGA socket(Land Grid Array). This socket will look like those already present for years on Intel motherboards. Why this change? Simply because of the larger number of pins on the Ryzen 7000 (1718).

AMD decided, with the AM5 socket, to keep a back plate already present for the AM4 socket. The 4 external holes that hold the retention system to fix your cooling system are still present. The distance between these 4 holes is identical to the AM4 socket, so you will still be able to use your cooling system as long as it uses the original backplate on your motherboard!

But AMD goes further and adds 4 more holes. These will be used to hold the AM5 socket in place but also to hold the backplate in place. This one should not be removed as on the previous generation. Finally, the locking mechanism changes. We find the reinforcement frame, the force frame and the latch. Once your Ryzen 7000 has been placed, respecting the alignment keys, you just have to close the latch to keep it in place.

A small remark following my tests, where I removed and put back several times these new Ryzen 7000, know that the grip is far from being obvious with the particular shape of the IHS. There is a risk of accidents if you are not careful with the processor which could slip out of your hands and damage the pins of the socket. So be careful!

The dimensions of the board are 305 mm x 269 mm, which corresponds to the E-ATX format. The dominant color on the PCB is black and gray with gray inscriptions. This neutral side will allow it to be integrated into any type of installation. The design is easily identifiable as an AORUS product since this model has a design that is quite similar not to that of the previous generation, the X570, but rather to the Z690 version that we have reviewed.

You can also see the massive backplate on the back of the PCB that also acts as a heatsink. Pads are placed where the heat is the most important like at the back of the power supply stages. Two of them can be found at this place.

The heat sinks are covered with a ” nanocarbon ” coating that AORUS claims improves heat dissipation by nearly 10%. The fins also benefit from an in-house technology ” Fins-Array III ” which results in irregular fins whose objective is to increase the surface of dissipation. The plastic cover, which covers part of the radiator and external connectors, has a very very light RGB backlight. We are here on a completely passive system.

Finally, the third one covers the two chipsets and has a fairly large surface but low height to allow easy placement of graphics cards. The cutout fits perfectly and makes a “block” with the cover that covers part of the SSD slots.

This new X670E chipset also brings DDR5 support. Our AORUS X670E Master has four memory slots. Keep in mind that there are two priority slots as indicated on the PCB (A2 and B2). The specifications available on the website indicate support for DDR5 up to 6600 MT/s and you should know that we have no concerns with our 6000 MT/s CL30 GSKill kit.

AMD, in collaboration with the manufacturers of memory modules, now offers kits with the “EXPO” technology. This is an alternative to the XMP profile (A-XMP at AMD). As a reminder, XMP allows, via the BIOS, to automatically activate the characteristics of your memory kit: the frequency, the timings as well as the voltage. The AMD EXPO technology will also allow you to overclock DDR5 in a single click in combination with the Ryzen 7000.

A gray aluminum plate with a cutout that perfectly matches the one on the chipset covers three M.2 SSD slots. These three slots are PCIe 5.0 x4 compatible and benefit from optimized thermal dissipation via a thermal pad on both sides of the slot.

But when it comes to the PCB, there’s more to come. The most attentive have noticed a “Thermal Guard III” heatsink that is located just below the socket. In fact, this one covers the first SSD slot, which makes a total of four. This slot is also 25110 PCIe 5.0.

RGB or not RGB?

As is the case with most of the AORUS range, it has a backlight in the heat sink covering the connectors. In reality, it is much more than just backlighting, as it is an animated screen with the AORUS logo.

The management of this one is set via the in-house software but it is also possible to deactivate it. The MultiKey button can also benefit from this function which consists in disabling the RGB.