The additional ventilation takes the form of two Riing 14 fans from Thermaltake, placed in the top of the case, in extraction and in front in suction.

We start with the temperature of our CPU. We keep the front and the top of our test case. Let’s see if the airflow is sufficient for the good cooling of the Ryzen 7 1700X. 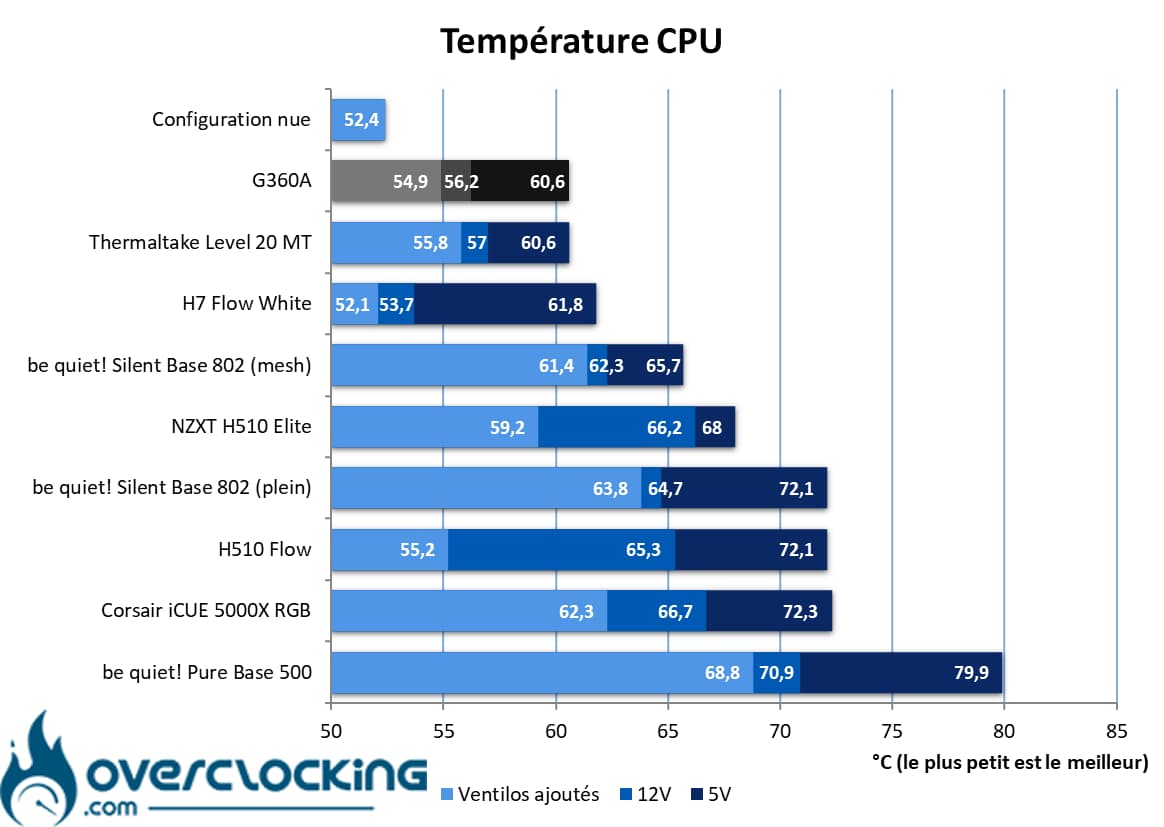 So we start by taking the temperature reached by our processor in this G360A from Phanteks. And as we can see, this model proves to be a good student since it is positioned at the level of a Level 20 MT, or perhaps even better on its highest speeds.

On the other hand, the fact of supplementing the ventilation does not bring very big gains in temperature. We don’t even have two degrees better than the original ventilation.

In order to ascertain the limiting factor in the story (and how much), we remove the top as well as the front of the case. The goal here is to show the raw performance of the integrated ventilation. 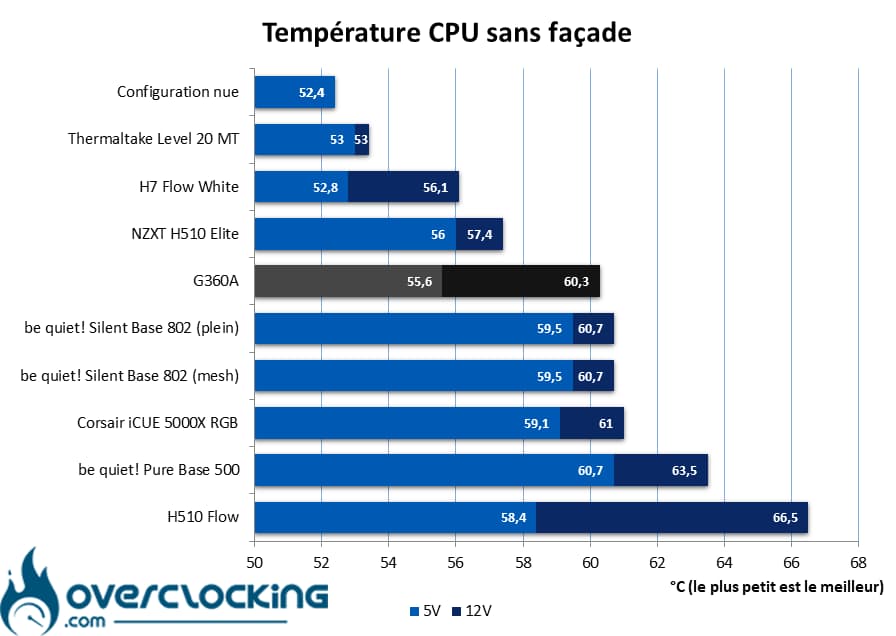 It’s when we remove the front panel that we realize that the mesh used on this model does not constrain the airflow, or even very little. By removing it, our processor loses only three tenths of a degree at low speed and six tenths at full speed. In short, for our Ryzen 7 1700X, we can say that there is no noticeable difference!

We repeat the operation, but with measurements made on the graphics card. Here, we test with the original ventilation and the completed ventilation. 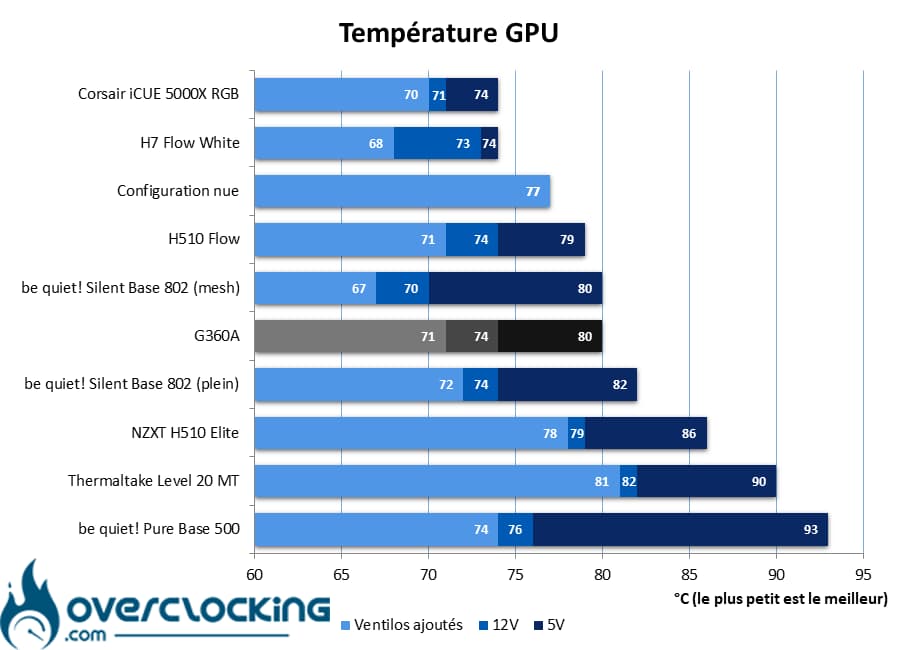 Concerning our graphics card, an old reference HD 7970, things are going pretty well. The card is maintained in correct temperatures with a maximum of 80°C which is largely bearable.

On the other hand, the fact of completing the ventilation has a more significant impact than on our processor.

We redo the same test, but by removing the front and the top of the case. Let’s see how this will affect the temperatures of the card. 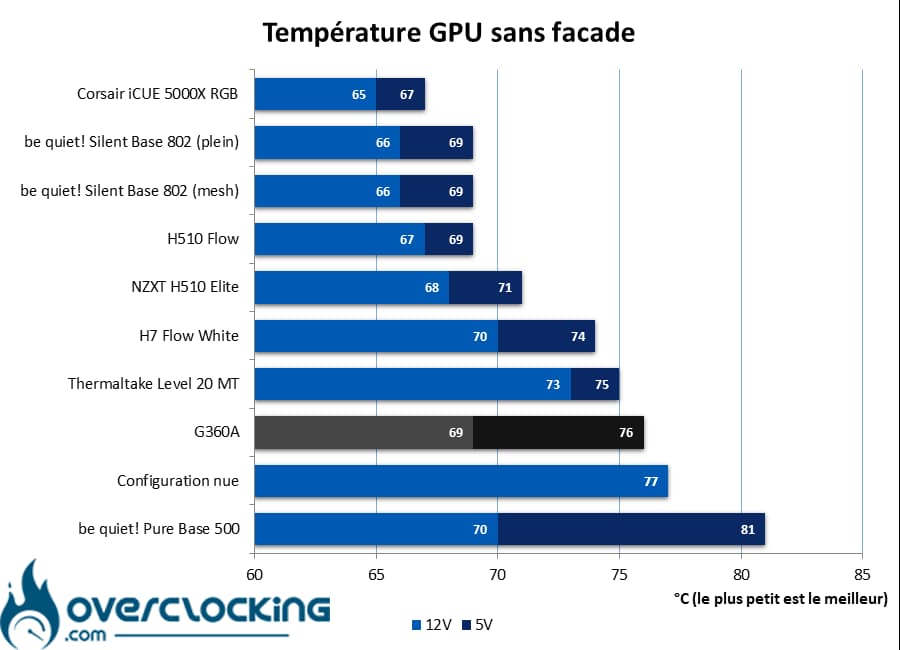 On the other hand, we can feel that the graphics card is immediately more sensitive to differences in airflow than the processor. Here, by removing the front panel, we gain 4°C at low speed against 5°C at full speed. Nevertheless, compared to other models, such as the Level 20 MT (again), the difference is not excessively marked.

Here, we simply measure the noise emitted by our configuration when we run the CPU and GPU cooling very fast. 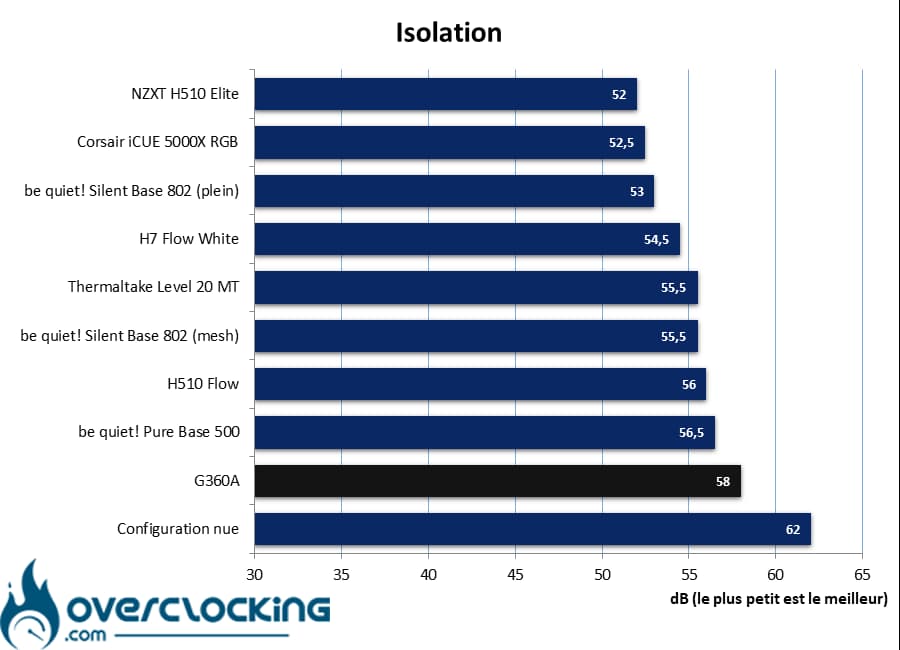 As you know, the mesh insulation level is clearly not great. With its 58 dB, the G360A is the least well insulated model of our selection. Even the H7 Flow White does better despite its perforated front panel. After that, it must be said that the NZXT case is bigger, which must help to reduce the noise.

This time, we measure the noise emitted by the original ventilation of the case. For this, the configuration runs in idle ( CPU and GPU ventilation at minimum) while the readings are successively done in 5V, 8V and 12V on the case ventilation. 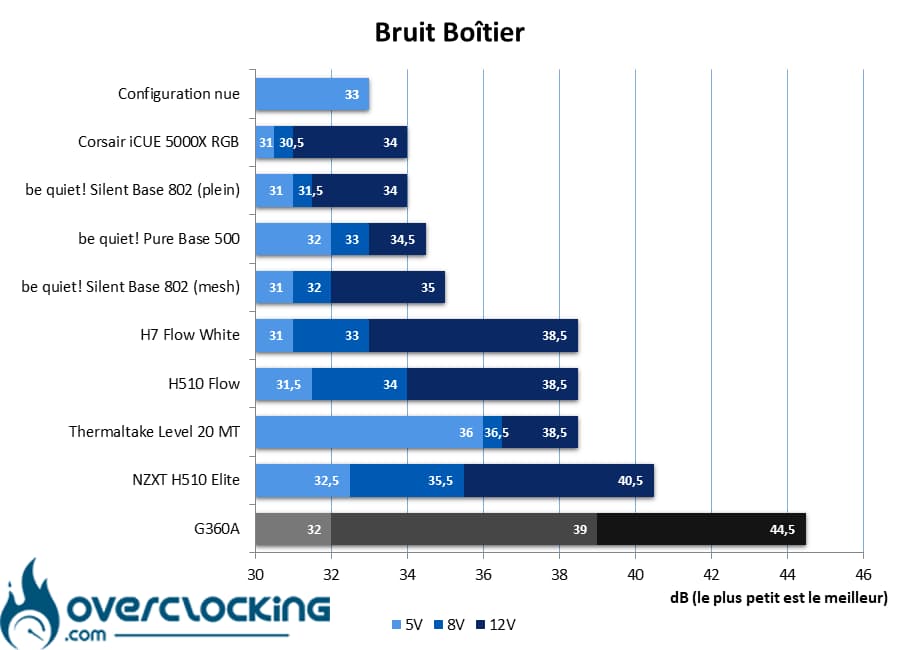 is a good student when it comes to temperatures, but less so when it comes to noise. At 44.5dB at full speed, the three fans will make themselves heard. Fortunately, by reducing their speed, there is a way to gain in discretion, even more so if they are heavily muzzled.

In general terms, this new case from Phanteks is a good student of temperature. Its three front fans cool our CPU fan and the graphics card well… Especially since the front mesh will only restrict the airflow a little, which is good news.

However, it is much less good on the aspect of noise pollution since the insulation is quite catastrophic. It must be said that with mesh, it is as if the machine was working in “open air”.

To this, we must add an audible ventilation, especially at full speed. Fortunately, by muzzling it, you will be able to seriously gain in silence.