In terms of packaging, the brand offers something sober with a basic cardboard packaging. On the latter, there is an illustration of the CPU cooler as well as a reminder of its features / technical specifications. It’s simple, it goes to the point.

Inside, we find the heatsink well protected in black foam blocks. Clearly, this makes the coffee, the product arrived unscathed with no bent or twisted fins. Finally, each element is separated by a small layer of foam, reinforcing the protection.

Clearly, considering its dimensions, the T120 RGB is a compact heatsink. Indeed, it is 120mm wide, 66mm deep and 159mm high with its fan. Overall, it will fit into just about any case on the market without too much difficulty… Unless you have an ITX type model, but that’s another debate.

On the other hand, it is a featherweight since after weighing, it shows about 660g on the scale. A weight similar to that of the AK400 from DeepCool! 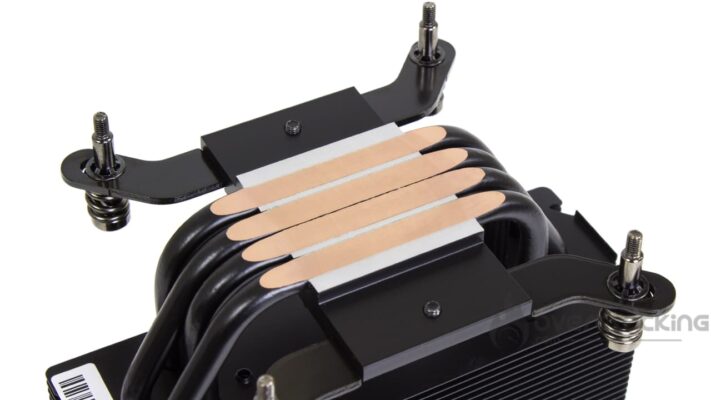 As you can see, out of the box, the T120 RGB comes with the Intel mounting brackets pre-installed. Next to that, we find an aluminum base with a total of four 6mm copper heatpipes running through it. As you can see, these are mounted in direct-touch, so they will come into direct contact with the processor. Moreover, this base has dimensions of 40 x 35 mm, enough to cover the IHS of any CPUs on the market.

The finish of the base is rather clean with a rather neat integration of the heatpipes… Despite a more marked gap between the two in the middle. On the other hand, we notice that it is not eccentric as it is the case with the Jonsbo HX6250 for example. Let’s just say that with the dimensions of the radiator of the T120 RGB, there is no need for it. 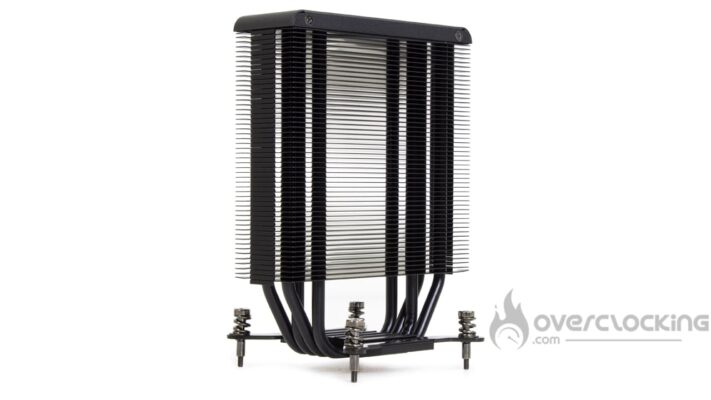 The radiator itself has a classic, straight profile. The fins do not have any special cutouts, unlike the AK series from DeepCool. In addition, the block is not off-center, again.

Nevertheless, there are a total of 53 aluminum fins. These are quite tight and bent on the sides to create a “tunnel” effect. 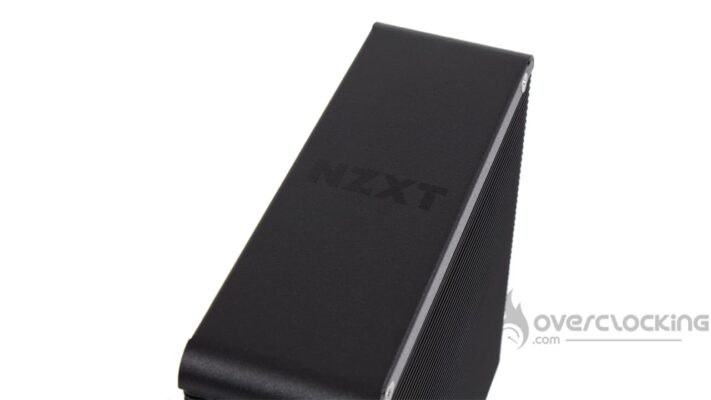 Aside from that, the finish is clearly of a good level. On the one hand, we find an aluminum top cover. The latter hides the unsightly tip of the heat pipes while presenting a small logo ” NZXT ” painted black on black.

On the other hand, the radiator has an integral black coating that can be found on the fins, but also on the copper heat pipes. This reinforces the sober appearance of the product. Note that this model is also available in white!

We now come to talk about the compatibility of the sockets of this heatsink. On this subject, NZXT mentions:

The brand intends its heatsink only for so-called ” mainstream ” platforms from Intel and AMD. This is why the LGA-2000 and sTR4 sockets are not among the compatible platforms.

In terms of ventilation, we find a single fan F120 RGB in 120 mm. As we can see, this fan has a rather sober look with a black and smooth frame. The RGB lighting seems to be at the heart of the thing with a rather thick translucent ring that tends to stand out from the rest.

The blades are seven in number and offer a wide and thick profile. Moreover, their shape briefly reminds us of what we can find on the NF-F12 from Noctua.

Otherwise, we notice that the frame has rubber silentblocks whose purpose is to reduce the vibrations during operation. Otherwise, the connectivity includes two cables, one for the RGB lighting, the other for the power supply. The cables are basic: flat and black, no sheath here. 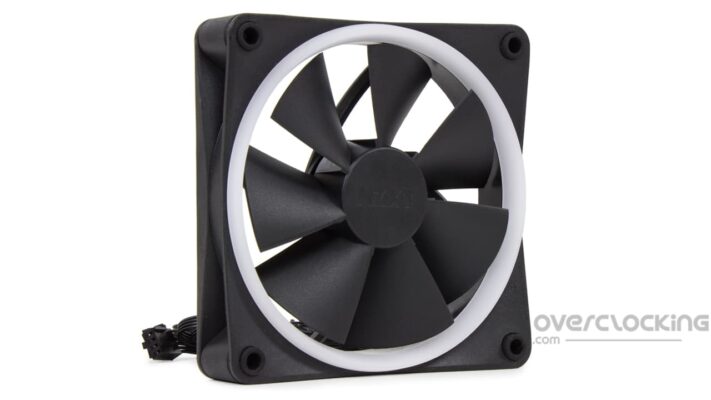 As for the technical specifications, NZXT mentions an operating speed between 500 rpm and 1800 rpm. Rather fast for a use on aircooling ventirad… At least, compared to what we are used to see anyway. Otherwise, the maximum airflow is 50.18 CFM and the maximum static pressure is 2.7 mmH2O. 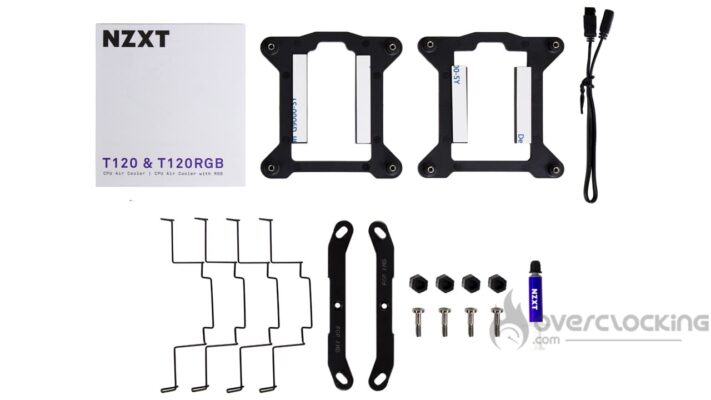 The accessory part rests in a small cardboard box and features :

In itself, the accessory part goes to the basics by offering only what is needed for mounting and that’s it. Nevertheless, the fact that there is an additional steel claw set for mounting a second fan is to be welcomed.

In general terms, we can say that the T120 RGB is a good looking and well finished heatsink. On the other hand, it offers a rather basic heatsink structure, with only four heatpipes in direct contact with the CPU. On paper at least, for ~55 € we find better. Let’s see how it performs, but before that, let’s see how the installation stage goes!