We are coming to the end of this test of the NH-D12L signed Noctua. Are we dealing with a successful product? Let’s see it in detail!

With its new model, Noctua offers us a really compact dual tower fan. Indeed, it has a height of less than 150 mm and is perfectly compatible with the RAM, at least in its basic configuration. The same goes for the first PCIe slot on the motherboard, which is not blocked.

Besides that, the brand puts forward a air cooler with exemplary manufacturing quality. As for the look, it’s still a bit complicated with this brown/beige theme that will not delight everyone, that’s for sure.

Nevertheless, we can count on a complete accessory section offering even the necessary tools for mounting the air cooler. And the few accessories that may be missing are present in the fan boxes, here, the new NF-A12x25r.

Finally, for the assembly, it will be necessary to proceed exactly the same way as with the NH-U12A chromax.black and thus to assemble a backplate for Intel motherboards. In AMD, no criticism, the heatsink can be assembled quickly and well!

Performance behind a NH-U12A!

As far as performance is concerned, the NH-D12L is behind the U12A and quite markedly so. At the same time, it has only one fan compared to two for its rival brother. Moreover, we find this single-fan configuration to be detrimental, especially when we try to make it work at low speed in overclocking. In these conditions, adding a second fan is a good idea.

Otherwise, with two fans, there is clearly some improvement, the temperatures decrease, but it remains insufficient in our opinion in case of big OC.

Regarding the noise, basically, the noise generated by this NH-D12L remains under control offering similar nuisances to the U12A ... At the same time, logical, they are the same fans.

Again, Noctua applies a high-end pricing to its heatsink since it is displayed at 90 € on Amazon. The pricing is therefore located between the NH-U12S and NH-U12A for performance between the two products. And if you need a second fan, identical to the first one, it will still cost you €29.90 on Amazon.

On the other hand, at this price, the heatsink may seriously suffer from the competition. We think of the DeepCool AS500 Plus (~70 €) in particular. A heatsink that is certainly more imposing, but also less expensive.

We liked it less : 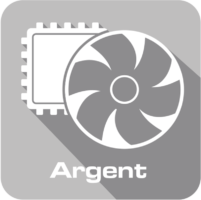 In the end, we choose to award silver to the Noctua NH-D12L. The product does have a number of advantages: easy installation, six-year warranty, controlled noise, small footprint, etc. Nevertheless, we fear that the competition will be tough, especially since you should not hesitate to add a fan in case of overclocking, especially if you want to use the fan at low speed.

Many thanks to Noctua !