Once out and plugged in, we quickly notice the modularity of the numeric pad and the Media dock, which can be put on the left or on the right, with a certain ease since we can do it with one hand and even during the use. An interesting possibility because sometimes we don’t need a numeric pad when we play (for example) and we may need more space for the mouse. 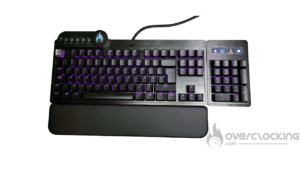 Another important point is the possibility of tilting the keyboard in steps with small magnetic wedges that you put in the corners under the keyboard (it really holds very well). The wrist rest is quite comfortable and quick to remove and put back if needed.

Since the brushed part of the aluminum is not uniform, it gives an unfinished look, which is a shame considering the quality of the rest. 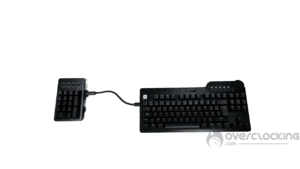 As a reminder, on the back we have several channels to pass a USB cable. By default, we’ll put it at the top, but it’s possible to put it on the right as well as the left, but also at the bottom. I think this is useful when we plug another USB cable into the keyboard, because yes, it also acts as a hub (plus an extension cord, because there is only one plug) with a USB type-A output, which is on the top edge of the keyboard.

Basically, on our sample, there are switches of the brand Cherry more precisely MX Red. We have in the bundle 5 types of Cherry MX: MX Brown, MX Red, MX Blue, MX Silent Red and finally MX Speed Silver.

This intention to send with the keyboard each of the possible switches from Cherry is nice to know if you like, or even to make a change on a single key, and thus give another feeling when pressing it (space bar for example). 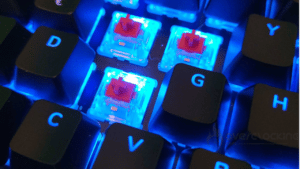 This keyboard being built on Cherry MX, there is no problem to change switches and thus radically change the quality of the typing. To test the compatibility, we tried to use YOK Mint Pandas switches and it works very well. Also, don’t forget that all the tools to remove the keycaps and switches are included.

For this test, we put the five switches side by side on the A, Z, E, R and T keys in this order, MX Blue, MX Red, MX Silent Red, MX Brown and MX Speed Silver.

MX Blue You can hear the recognizable click of the Blue with this hold effect.

MX Red Much lighter and more direct on the press, you can still hear the hit at the end of the stroke.

MX Brown The classic and basic one when you don’t know what to turn to. It’s a switch that is a mix of all the others. The sound is a bit more metallic. This must be due to the fact that it is resting on the aluminum chassis of the keyboard.

MX Speed Silver Less metallic noise than the Brown, but faster than the Red.

Of course, the keyboard is RGB with a customizable LED per key. But there is also lighting between the two aluminum plates. A detail that gives something very ” smooth ” and pleasant on a desk.

This software is convenient to use and to set up. For example, there is no need to create an account, as is the case with some competitors. Nevertheless, there are a lot of things to review, like for example the ergonomics, when you want to select an icon to display it under the key. 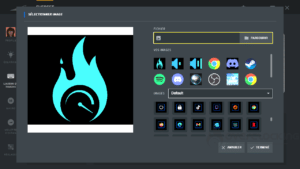 To record a macro, you have to choose the function and then a second zone appears to do what you want. Either link it to a program, or even a key combination. It is also possible to make subdirectories or to swap between profiles. This really gives a multitude of possibilities on only 4 keys. 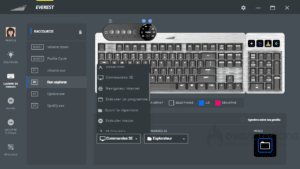 For the RGB part, it has 8 possible effects, it goes from the wave to the reactivity when pressing the key. The customization is rather limited, because you can’t choose more than 2 different colors. For example, we want to make a wave of color, it is only a single color. This means that only the chosen color will be shown and the rest is black. Or in double color, that is to say, that the black previously, is replaced by the second color chosen. No gradient possible. And finally we have the “rainbow” mode with all the colors.

Concerning the speed setting, we touch here something more personal. The minimum speed remains too fast…But it remains subjective. Concerning the brightness, it is ON or OFF and not between the two, and when it is OFF, you can’t see anything, so you might as well stay on the full brightness constantly.

It is possible to put information such as the clock but also information about the CPU usage in percentage. However, if you use the latter, it is impossible to use a macro on it. So unfortunately we lose a key. For example, you can put the view of the live CPU usage, which is very useful when you are streaming or even playing. Clicking on the task manager is unfortunately impossible. Hoping to be able to do it with an update in the future.