Our first series of tests will be dedicated to synthetic benchmarks. These are often used for overclocking competitions but are also very interesting to compare different GPUs. So we will focus on the 3DMark benchmarks. We will test the following benchmarks:

Let’s start with 3DMark Fire Strike, which is one of the most used benchmarks today. It consists of two graphics tests, a CPU test and a fourth test that combines GPU and CPU. Don’t forget to deactivate the demo which doesn’t bring anything in the final score and prolongs the benchmark duration (unnecessarily). The version used for these tests is of course the latest one 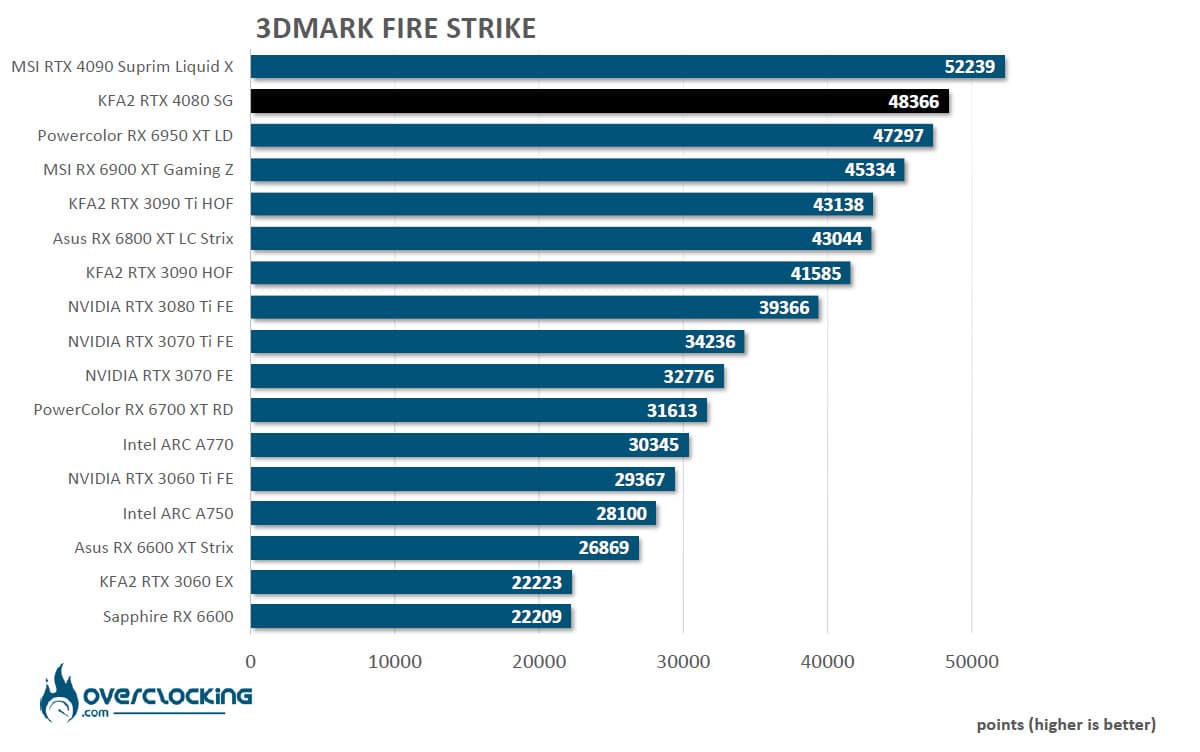 The first benchmark that we carry out with this KFA2 RTX 4080SG and the least we can say is that it starts rather well! The score obtained is 48366 points allowing it to pass in front of the RX 6950 XT, the best card in this benchmark after the RTX 4090. As you will notice later, the balance of the graphics is maintained thanks to the fact that the benchmark is done in 1080p. 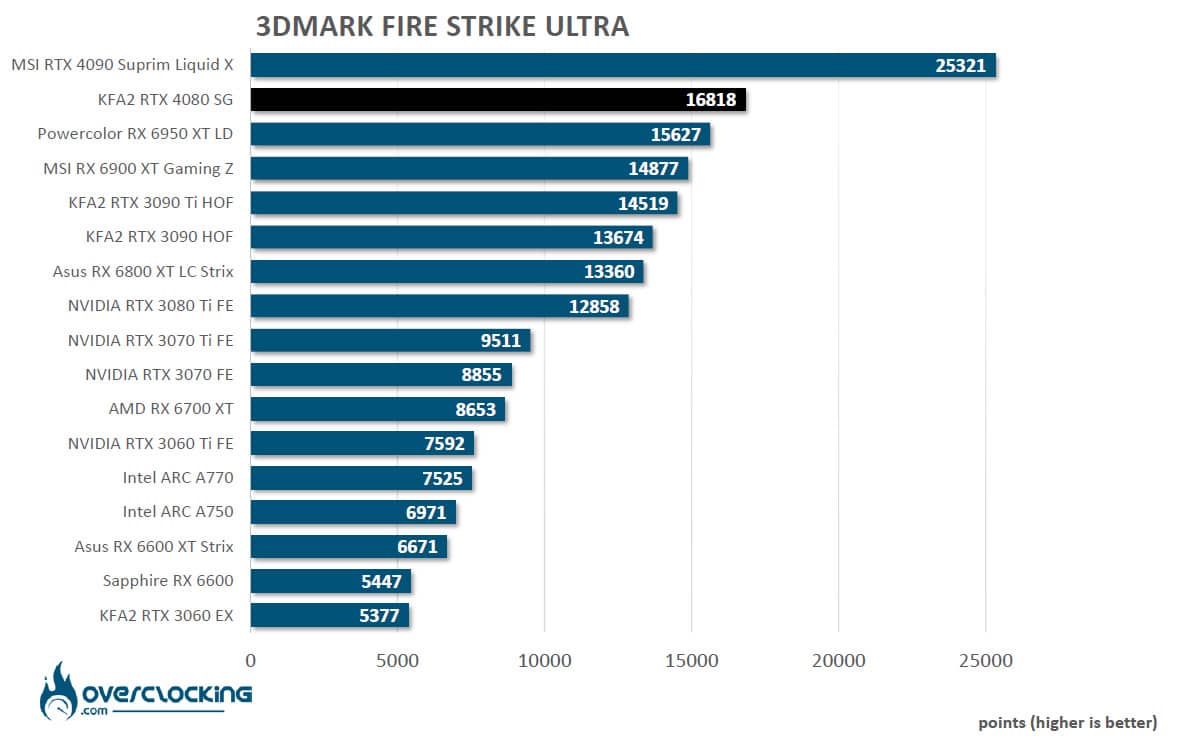 The same is true under Fire Strike Ultra as our copy of the RTX 4080 takes second place. We notice that the gap with the RTX 4090 is still very important since it is 8503 points.

The second test is 3DMark Time Spy. Although this one is done in 1440p, it has the particularity of using DirectX 12. It consists of two graphical tests and a CPU test. As for Fire Strike, don’t forget to disable the demo. These two first benchmarks are proposed by UL Benchmark. 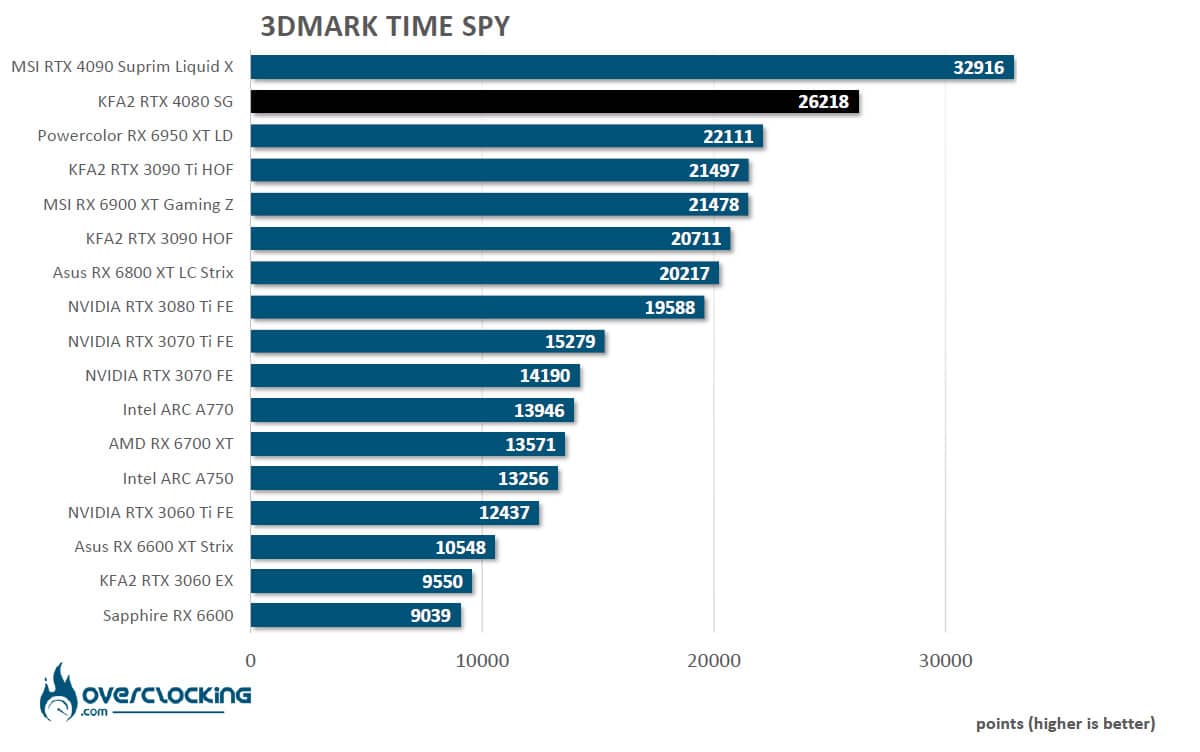 The performance obtained in Time Spy is often representative of what we will have in games. And here, two cards stand out from the competition. Just look at the shape of the graph to see the different levels. If this is confirmed in games, we may have excellent performance for the RTX 4080. 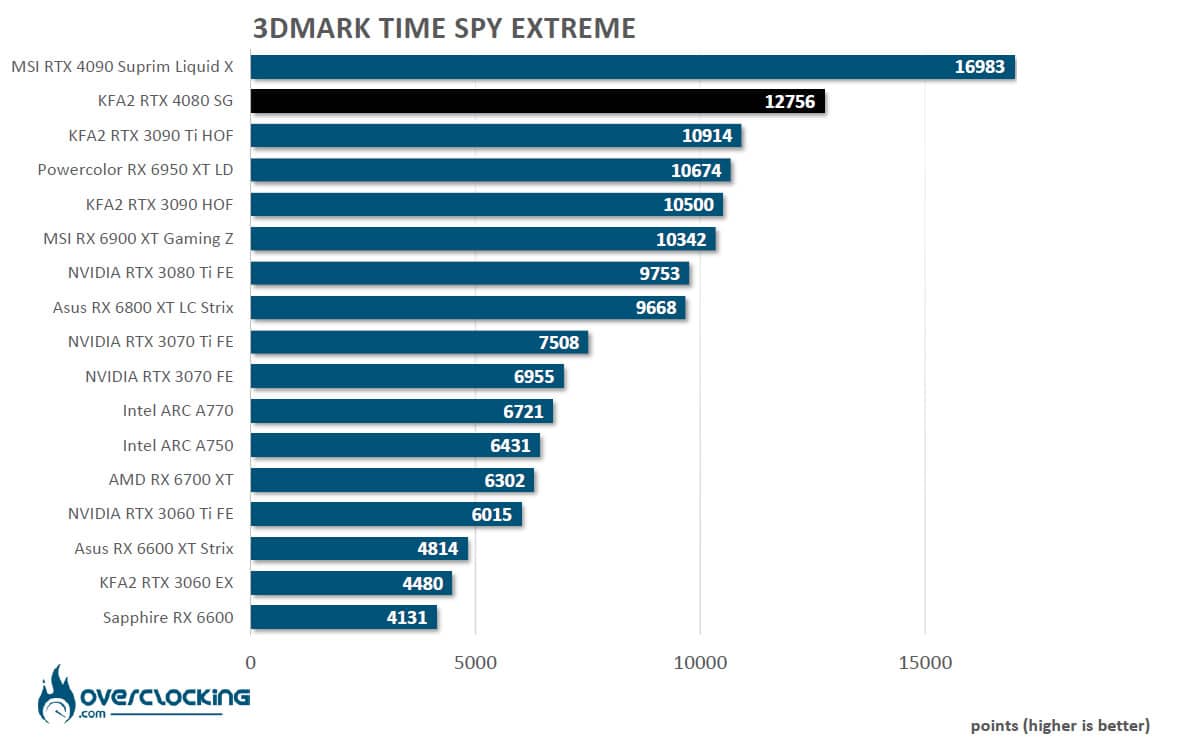 Under 3DMark Time Spy Extreme, we obtained an excellent score of 12756 points! Here again, we notice a significant gap with the third place occupied by our RTX 3090 Ti.

The latest benchmark proposed by Ulbenchmark and it’s nice to be able to say that we’re going to have a go at this Speed Way. It uses DirectX 12 and is by default in a 1440p definition. We have not modified anything and we use the original benchmark.

UL Benchmarks has added a new test to its series of benchmarks to measure Ray Tracing performance. The idea will be to use the 3DMark DirectX Raytracing test to compare the performance of Ray Tracing hardware dedicated to AMD and NVIDIA graphics cards but now also to Intel!

The 3DMark DirectX Raytracing test is designed to make Ray Tracing the limiting factor. Instead of relying on traditional rendering, the entire scene is traced and drawn in one pass. The test result will depend entirely on the performance of the Ray Tracing. It will be easy to measure and compare the performance of the different cards between them. 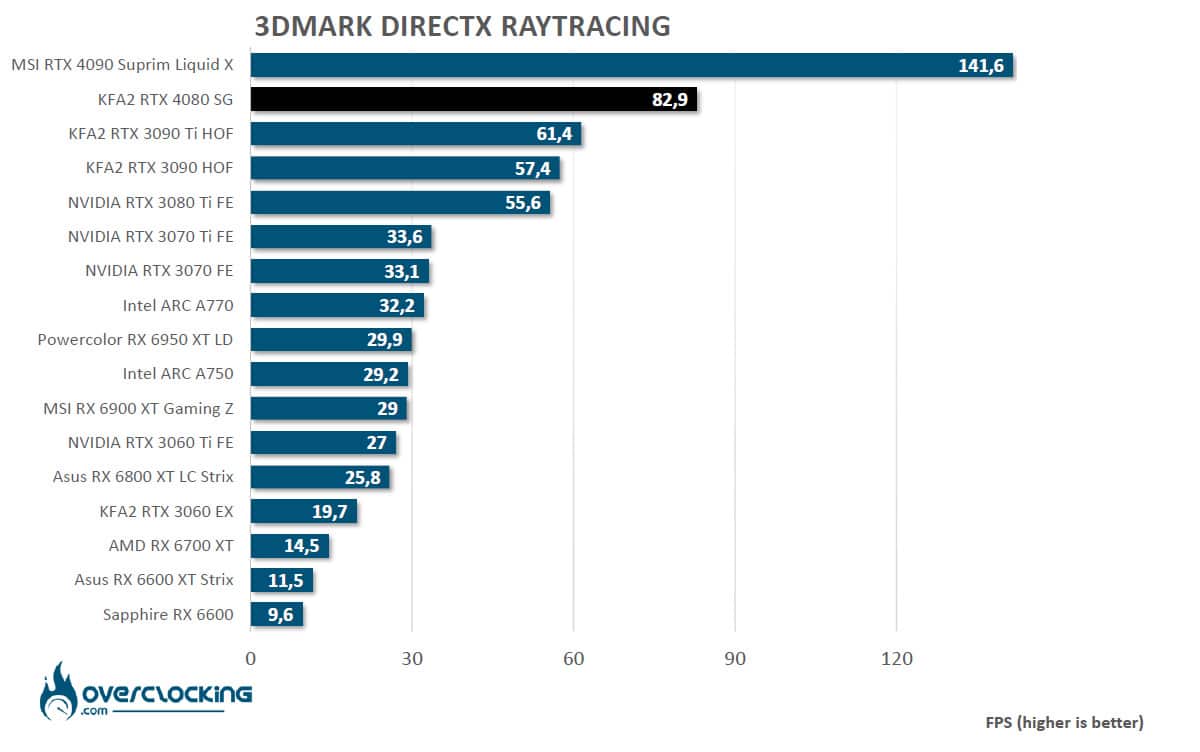 This benchmark has always been dominated by NVIDIA cards and our sample of the day is no exception to the rule as we get a score of 82.9 FPS. It is the addition of CUDA cores and the increase in frequency that has a huge impact on the performance gain.

UL Benchmarks in collaboration with Intel will add this new benchmark to the 3DMark suite. We had early access to this new test for our testing. This Intel XeSS test is designed to evaluate and compare the performance and image quality of XeSS (Xe Super Sampling). There are four XeSS modes to choose from: Ultra Quality, Quality, Balanced and Performance. The 3DMark inspection tool helps you compare image quality with a side-by-side view of XeSS rendering and native resolution rendering. You need a graphics card that supports Intel XeSS to run this test.

So we’ll have two scores, a FPS number with XeSS disabled and then on the right with XeSS enabled. The mode chosen is “Ultra Quality” which is actually the default mode for the benchmark. 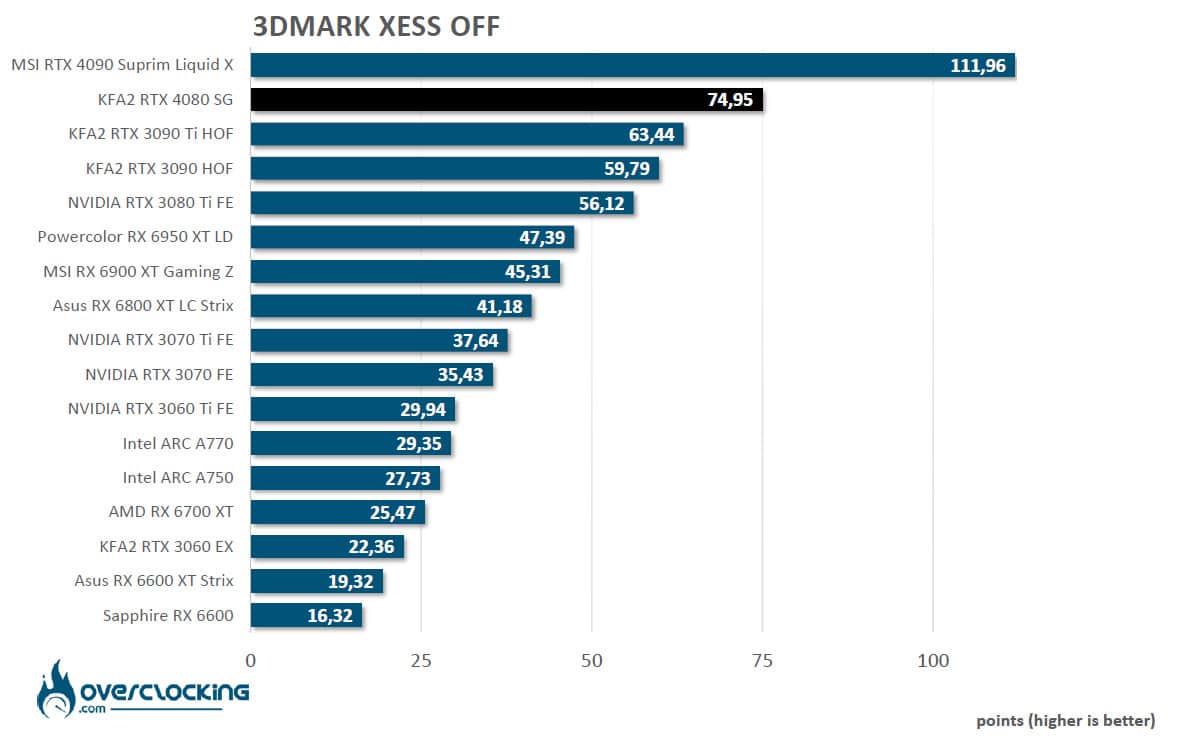 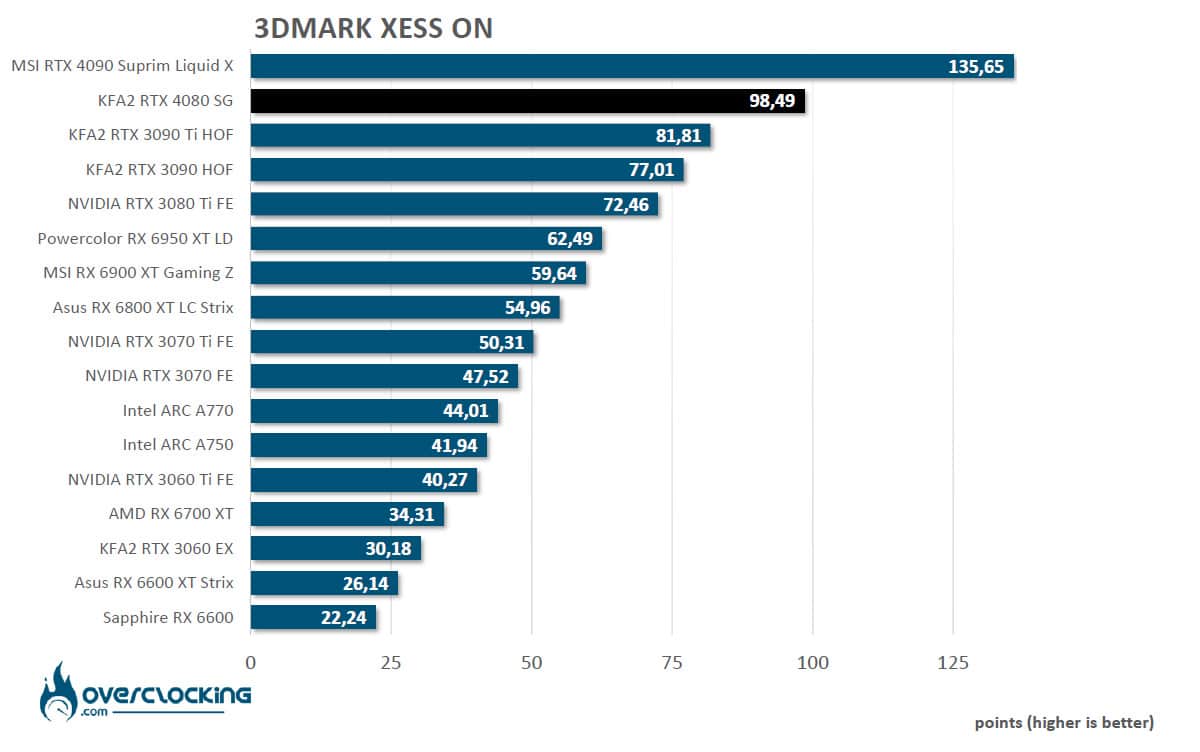 Here is the new test we added to the synthetic benchmarks: Mesh Shader. We added it because it is managed by the RDNA 2 architecture of AMD and therefore our RX 6000. It allows us to analyze the performance level of GPUs concerning this feature. As a reminder, it allows to exploit more complex calculations at the geometry level, in a more flexible way, for each meshlet . The displayed result is the one with the Mesh Shaders active. 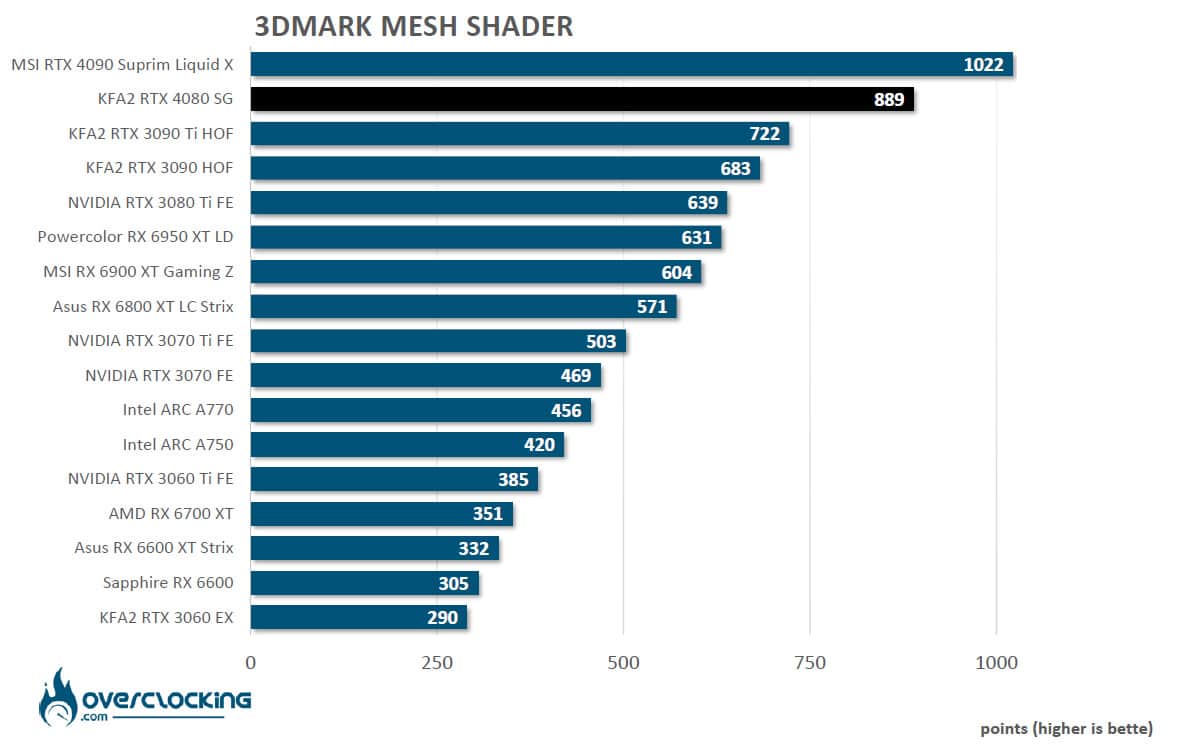 Well, as we conclude this first series of synthetic tests, we are pleasantly surprised by the performance. Sometimes far from the RTX 4090 in some benchmarks, our RTX 4080 is always in second place and with important gaps against the third in some benchmarks, especially the Time Spy series.