As far as packaging is concerned, it is the usual design at be quiet! since we find the traditional black box. Of course, an illustration of the kit is on the front with a reminder of the main features on the back. The details of the technical specifications are available on the right side of the package.

Inside, we find the classic cardboard mold protecting the various elements of the kit. Moreover, each part has its own plastic bag… Except for the radiator which is covered with a protective cardboard.

As with the first Pure Loop series, this new generation benefits from a very aesthetic and well finished radiator. It has a nice square shape with a nice matt black paint and a nice reminder of the series on the edge. In short, again it looks good, very good even.

With this, we can count on the presence of a filling hole located at the end of the block… Opposite the departure of the pipes. Very practical if you want to refill after a few years of service. Sometimes the liquid ends up evaporating, in part, which reduces the cooling performance.

Otherwise, the radiator remains fairly classic with its aluminum construction. The same goes for the dimensions with 397 (W) x 120 (D) x 27 (H) mm. Finally, the number of channels rises to twelve, which is what we find in most manufacturers. 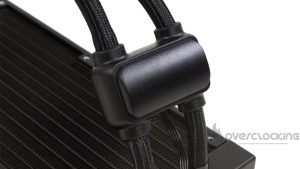 However, less classic, the place of the pump which is located directly taken in the pipes. The latter benefits from a power supply via a PWM fan plug. If the brand does not specify its characteristics, we know that it will operate from 4000 RPM to 5500 RPM at full speed.

Finally, two pipes are present to connect the radiator and the CPU waterblock. These have a nice nylon sheath for a better finish. And the tubes are flexible which will facilitate the assembly in the tower!

Regarding the waterblock, be quiet! uses the same design as for its first generation Pure Loop. It has a black logo engraved on a gray brushed aluminum background. Moreover, for the lighting, we can see the presence of a small border surrounding the logo. We also notice that the fixing points are integral to the block. 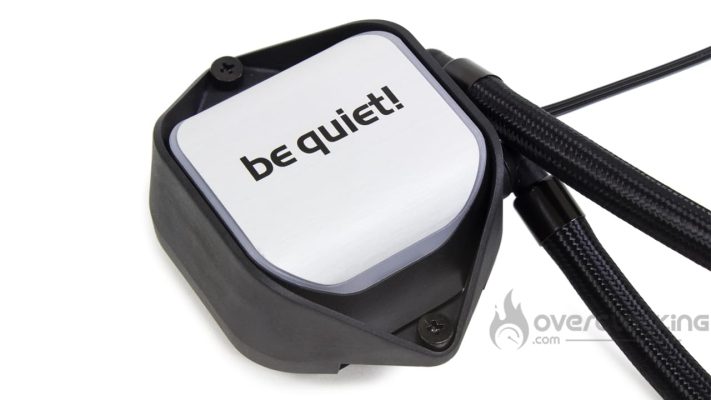 Otherwise, it is below that we find the cold plate. This last one offers an excellent finish since it is in nickel-plated copper. The same goes for the construction since the traces of machining are fine and will hardly be felt under the fingers. Finally, we will remember that this copper base is aimed on the rest of the block. Indeed, eight Torx screws hold it in place. If necessary, it will be possible to unscrew it, although we do not recommend it. 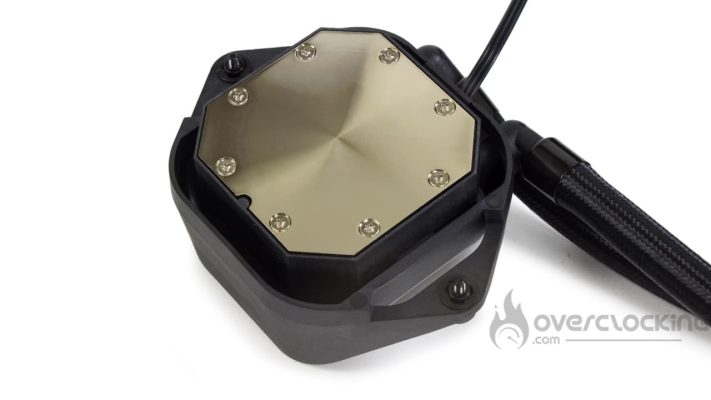 The copper base is of correct size since it is 5.5 cm on a side. It will cover the entire IHS of a Ryzen processor or an Intel Core i, even at socket LGA-1700. However, for Threadripper, you should not count on it, especially since this Pure Loop 2 FX 360 is not compatible with the TR4 platform of AMD.

Finally, even if there is no pump, the waterblock still has a cable, cable used for RGB lighting. So we have a three-pin connector quite classic measuring about thirty centimeters.

With the Pure Loop 2 FX 360, be quiet! ensures a near-exemplary compatibility since the vast majority of recent platforms are compatible:

Right out of the box, the kit is therefore perfectly compatible with the LGA-1700 platform from Intel. The same goes for AMD’s AM5 . However, there is nothing about TR4 cards and derivatives.

Since we are facing a 360 mm watercooling kit, we find three fans. And on this subject, the brand offers us a reference that we know well since we had the opportunity to test it in the past. It is the Light Wings 120 with their RGB lighting in the form of a ring.

On the visual level, we find the characteristic fans of be quiet! with their grooved and rather thin blades. Moreover, because of the RGB lighting system, the blades are rather short despite a rather thin central hub. 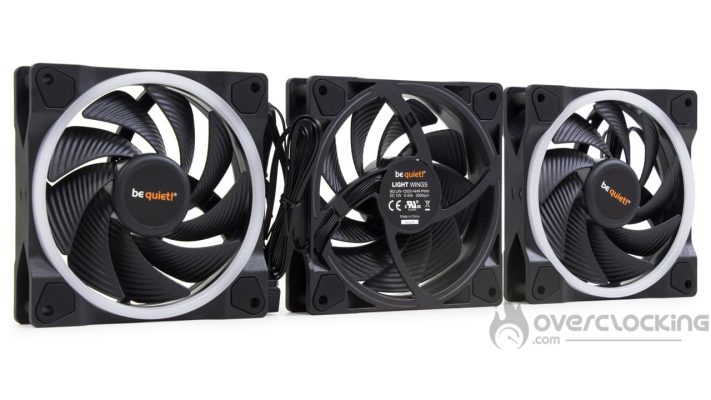 Unfortunately, the airflow and static pressure are not specified by the brand. We only know, for sure, the operating speed which can reach 2500 rpm. However, based on the fans already tested, we imagine that the airflow will reach 52.3 CFM and that the static pressure will rise to 2.6 mmH2O.

Finally, each fan has two connectors of about 50 cm. The first one, of PWM type, will be used for the power supply while the second one will be useful only for the lighting part.

As for the accessories, we find something very complete since the brand offers :

As we said, the accessory part is complete and goes up to propose a hub for the fans allowing the management of the speed and lighting from the motherboard. The small bottle of liquid is also welcome since it will allow you to refill the kit without having to buy more liquid. And of course the nylon collars, always practical!

In broad terms, be quiet! puts forward a Pure Loop 2 FX 360 convincing with a nice design and a neat radiator. As a reminder, we are at ~125 € and on more expensive kits, the radiator is far from being as pretty. Otherwise, we have the right to a complete accessory part highlighting a hub to centralize the management of the kit, which can be very practical.