It was today at 6:20 pm that Intel officially announced the arrival of its 13th generation processor range. You can find all the information in this news. In addition to the Raptor Lake processors, Intel has announced the arrival of the new Z790 chipset, and good news is that we have just received a copy of the ROG Strix Z790-A Gaming Wifi D4 motherboard. No tests for the moment since the NDA is still running but a presentation of this model. 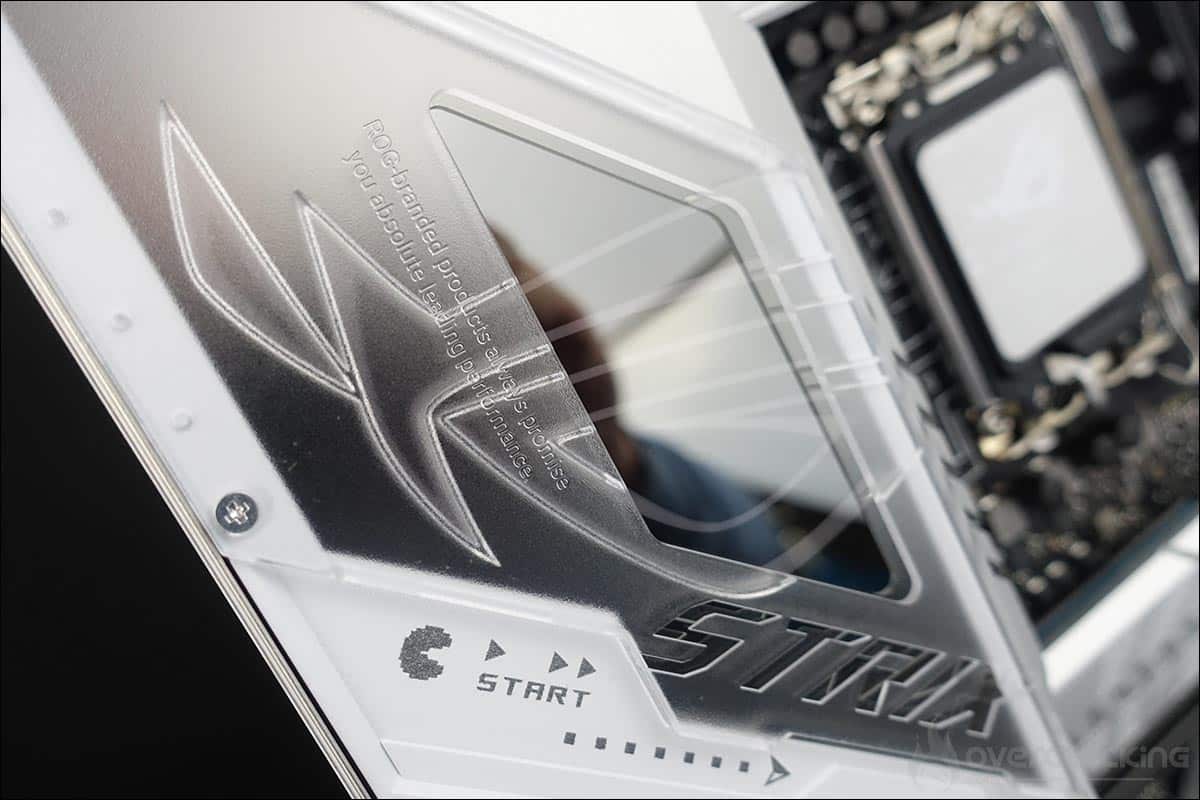 A little tour through the bundle of this ROG Strix Z790-A Gaming Wifi D4 to see if it benefits from “special items”. Overall, we find a fairly standard bundle with the traditional SATA cables, Wi-Fi antenna, stickers, motherboard manual, etc. The only goodies that stand out a little is the presence of a goody bag. The only goodies that stand out from the crowd is the presence of a black and white ROG key ring.

This ROG Strix Z790-A Gaming Wifi D4 is built around the new Z790 chipset, which is an evolution of the Z690 and will keep the LGA-1700 socket. This is good news because this Z790-A will be backwards compatible. It will therefore be able to accommodate 12th generation Intel processors. Conversely, the Z690-A will be compatible with future 13th generation processors.

The Z790 chipset obviously supports PCIe 5.0, although no components are currently compatible with this standard. The first SSDs should arrive soon. Intel will still keep DDR4 support on this chipset but certainly for the last time. The final migration to DDR5 is planned for the next generation (2024).

The dimensions of the board are 305 mm x 244 mm, which corresponds to the ATX format. The dominant colors on the PCB are grey and white. The design is easily identifiable since it uses the usual codes of the brand on this series. It also has a resemblance with the Strix Z690-A D4 of the previous generation.

Let’s start the owner’s tour with the radiators, of which there are three! First of all, the two radiators located on the top of the motherboard and which cover the power supply stage. These two radiators are independent and are not connected together by a heat pipe. The plastic cover, with a very very light RGB backlight. We are here on a completely passive system.

The third covers the chipset and has a large surface but low height to allow easy placement of graphics cards. We find a series of small ROG logo and the name of the Strix series.

No less than 4 SSD slots:

Three gray aluminum plates whose cutouts match perfectly with the one on the chipset, cover the four M.2 SSD slots on the PCB. This gives you a very large storage area. All four slots are wired in PCIe Gen4.

Only the first SSD has a thermal pad to optimize dissipation on both sides. Do not forget to remove the protective plastic film before installing your SSD. Asus offers on this model the “Q-Latch” quick release. No more need to fix a screw, you just have to rotate the latch to lock the SSD.

The space around the socket is pretty clear and it comes with LGA-1200 and LGA-1700 mounting holes. This ROG Strix Z790-A Gaming Wifi D4 can accommodate a maximum of four DDR4 memory sticks. It supports dual channel memory kits up to 5333 MHz (OC) and a maximum of 128 GB.

You will also have noticed a button called Q-Release. When a card is plugged into the first PCIe slot , pressing this button opens the retention system and releases your graphics card. Simple and effective.

Let’s start with the elements inserted on the PCB which can be interesting tools for overclockers. There are very few of them since this board is intended for the mid-range.

We really would have liked to have a physical power button. Out-of-box testing always forces us to fiddle with a power button.

Our ROG Strix Z790-A Gaming Wifi D4 is equipped with the Renesas RAA 229131 controller that we have already found on other Asus Z690 cards, including the APEX. It is based on a 16 + 1 phase power supply. The part in charge of the CPU is composed of 16 phases and on this model, no doubler, but beware the phases are placed in parallel, so they are really 8. 16 mosfets of the vcore are Onsemi FDMF5062 of 70A.

The architected version had 80A mosfets. Did Asus decide to save money on this model by opting for 70A? Our test will tell us if this has an impact on overclocking or not.

Let’s finish the presentation of this ROG Strix Z790-A Gaming Wifi D4 with the connectors present at the back. First of all the Clear CMOS, the BIOS Flashback button as well as the antenna mounts for the dual band Wi-Fi. The card has an HDMI port and a DisplayPort. There are also two USB 2.0, five USB 3.2 Gen 1, one USB 3.2 Gen 2 Type-A and two USB Gen 2 and Gen 2×2 Type-C. Then come the various audio outputs and the Ethernet port (RJ45) 2.5 Gb.

See you in a few weeks for the complete test of this motherboard. No information yet on the price level but know that the Z690-A D4 version is still available for 373.87 euros. The members of our Discord reminded me that this is one of the two best boards for DDR4 memory overclocking.