The Chips and Cheese website has just published the first results of a Milan X processor equipped with 3D V-Cache. Is the performance improvement as expected?

A slight increase in performance thanks to 3D V-Cache.

Last November, AMD announced its new Milan X processors, equipped with 3D V-Cache technology, thus having a maximum of 768 MB of L3 instead of the current 256. This amount of cache should thus bring higher performance in some specific applications with up to 50% announced by the brand.

At the same time, the technology has also been teased for the general public with the Ryzen 7 5800X3D which should offer an average of 15% higher performance in games compared to the Ryzen 9 5900X.

Very nice figures in perspective, but what about in reality? This is what the website Chips and Cheese wanted to know, by testing an Epyc 7V73X processor from the Milan-X range using 3D V-Cache, with 64 cores and 768 MB of L3.

The latency was probably one of the most expected data concerning this new technology, with results that are on the mark.

The addition of its extra 512MB of L3 cache only added 3-4 cycles to the latency (in comparison, going from Zen 2 to Zen 3 with double the L3 resulted in 7-8 extra cycles). This translates into a 17% increase in ns compared to an Epyc 7763. 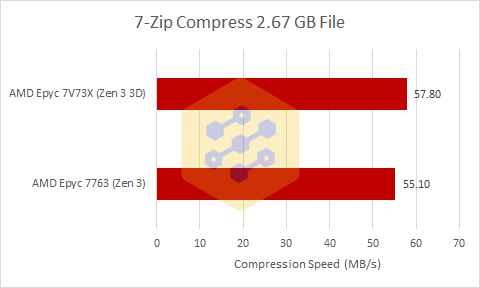 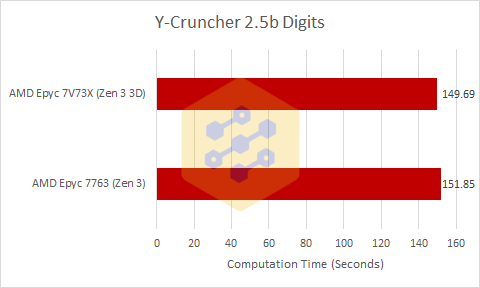 In terms of performance, there are notable gains to be seen in comparison with the already very efficient 7763, with an average 9% improvement in performance at equal frequencies on the applications tested today.

We are far from the performance announced by AMD on the day of the presentation, but it should be remembered that some applications may be more sensitive than others and that the results can vary greatly.

Of course, to get a complete opinion, we invite you to read the article available on the test author’s site.